The Game Itself
3 Stars
The Video: Sizing Up the Picture
4 Stars
The Audio: Rating the Sound
3 Stars
Replay Factor
1.5 Stars
Bottom Line
For Fans Only

Digital version reviewed for Xbox One. Requires the base game to play. Note: some spoilers present for the original game as well as 'The Lord of the Rings' in general.

'The Bright Lord' is the second of two larger DLC items for 'Middle-Earth: Shadow of Mordor', the first being December’s 'Lord of the Hunt'. It is the last of the planned season pass content.

Instead of the vengeful ranger Talion from the original release, 'The Bright Lord' is all about his wraithly twin Celebrimbor. You may remember that Celebrimbor was occasionally referred to as the Bright Lord by a few characters in 'Shadow of Mordor', most notably Gollum. In this DLC, the setting is long before the events of the game (and the books, and the movies), when Dark Lord Sauron had just created the Rings and was at his most powerful.

I am hardly an expert on Middle-earthly history, but some five thousand years before Frodo and Samwise destroyed the Ring, it was forged by the fallen demigod Sauron as a means to control humans and dwarves by corrupting their leadership. He appeared in disguise to the elven smith Celebrimbor as a divine spirit interested in sharing knowledge of jewelry-making. Thus he was able to trick Celebrimbor into forging sixteen rings to be worn by dwarves and men. Celebrimbor also forged three rings for the elves, which he subsequently hid. When Sauron abandoned his disguise and his true purpose became clear, Celebrimbor absconded with the One Ring and, with its power, began rallying the orcish hordes in Mordor against the Dark Lord.

This is where 'The Bright Lord' begins. It answers a lot of questions about the origin of Celebrimbor and his relationship with the Ring (most of which probably isn’t considered canon), but also raises questions that it doesn’t answer, such as exactly what mechanism turned him into a wraith upon his death, when other Ring-bearers die for good. Regardless, the entirety of this DLC is played with the Ring firmly on Celebrimbor’s finger. It does not make him invisible, but it does grant him incredible power. His ability to control the minds of orcs is even greater than that of Talion in the base game. He has several new moves that let him summon loyal orcs out of thin air, consume them for health, brand orcs at range, and even brand more than one at a time. When the Ring is charged, it can be activated to grant temporary invincibility and unlimited one-shot kills.

Presumably due to his elven heritage, Celebrimbor is not as sturdy as Talion in hand-to-hand combat when not using the Ring. He also cannot slow down time when he draws his bow, which is curious because he can slow down time when drawing on the Ring. The Ring is quite overpowered, and it can also be upgraded through side missions to allow for a longer duration.

Despite these new abilities, or perhaps because of them, 'The Bright Lord' offers little to the 'Mordor' formula. The map is the same, the missions are the same, and the characters are the same (there are only two here really - Celebrimbor and Sauron, and their dialogue is limited to threatening one another telepathically through the Ring). There are scant few side missions and collectibles, which are admittedly thin content anyways but would at least provide some distraction. The Nemesis system, widely considered to be one of the better mechanics in the base game, has been usurped by the storyline and much of its randomness hijacked. Many of the missions are also of the timed variety, which is alright when used sparingly to add a bit of tension, but in general I would rather enjoy the gameplay than be rushed all the time. As for the story itself, it doesn’t consist of much besides the aforementioned threats and a pair of short cutscenes bookending it. This feels like a sorely missed opportunity, as Celebrimbor is one of the more promising characters in Middle-earth. The DLC only briefly touches on the influence of the Ring on the elf, and it could have used that conflict to go deeper. 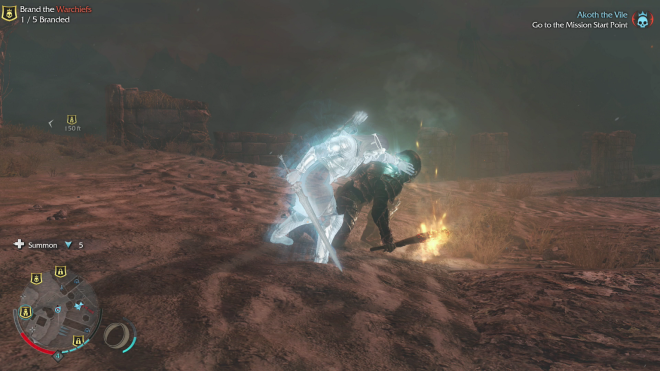 The same as the base game. Mostly free of bugs and artifacts, although on one occasion I got stuck in a wall, which never happened to me during 'Shadow of Mordor'. Thankfully Celebrimbor can teleport, so that prevented a restart. Some of the new warchiefs have character models that are more interesting than their predecessors, and Sauron is as malevolently regal as ever. 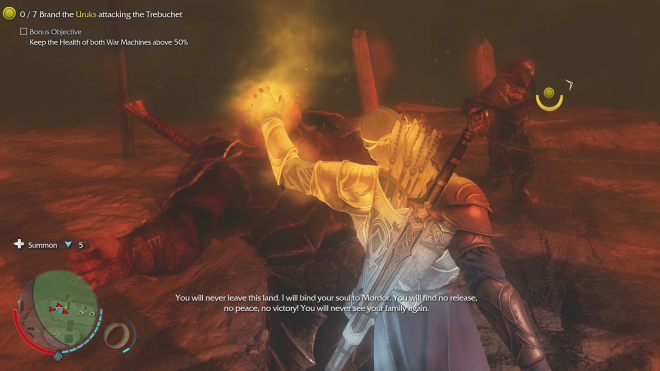 Also little change here since 'Mordor'. As there are so few characters, there is little voice acting, and this results in very little exposition.

I doubt I will pick up 'The Bright Lord' again after beating it. There’s not much to draw me back. The Ring is empowering but also loses its luster quickly. It does have a decent boss battle that starts off slowly but redeems itself in its second half. The DLC includes another test of power, which is a lot like the critical path but with more arcade-like features. It too doesn't have a huge capacity for replayability. 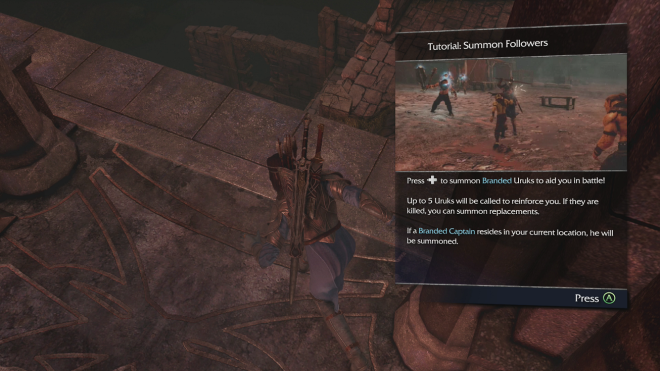 The dearth of narrative momentum or any characterization whatsoever is the most severe flaw of 'The Bright Lord'. I didn’t mind returning to Mordor for a few hours, but the constant stream of timed missions and lack of real content or story means that I’ll be forgetting what happened pretty quickly. This is season pass content so if you liked the original enough to commit to the pass, you might as well get your money’s worth. If not, there’s no need to pick it up.