The Game Itself
2.5 Stars
The Video: Sizing Up the Picture
3.5 Stars
The Audio: Rating the Sound
4 Stars
Replay Factor
0.5 Stars
Bottom Line
Skip It

'A Matter of Family' is, with the exception of a few skins, the first of the season pass content for 'Batman: Arkham Knight'. Taking place sometime before the base game, it has Batgirl/Barbara Gordon and Robin/Tim Drake heading out to the abandoned Seagate Amusement Park at the behest of Joker and Harley Quinn, who have abducted Jim Gordon. Unlike the core game, this DLC was developed by Warner Brothers Montréal, who also developed 'Arkham Origins'.

According to banter between Batgirl and Robin, the Seagate Amusement Park was built by a tycoon for his daughter, and was abandoned very near to its completion when said daughter was hurt. It has since languished, and is the perfect location for someone like the Joker to use as a venue for kidnapping. He has stolen away with Jim Gordon and a handful of other GCPD officers, and made it clear that he will kill everyone should Batman approach the park. His plan is to lure in some of the Bat’s sidekicks, who offend him with their very existence. 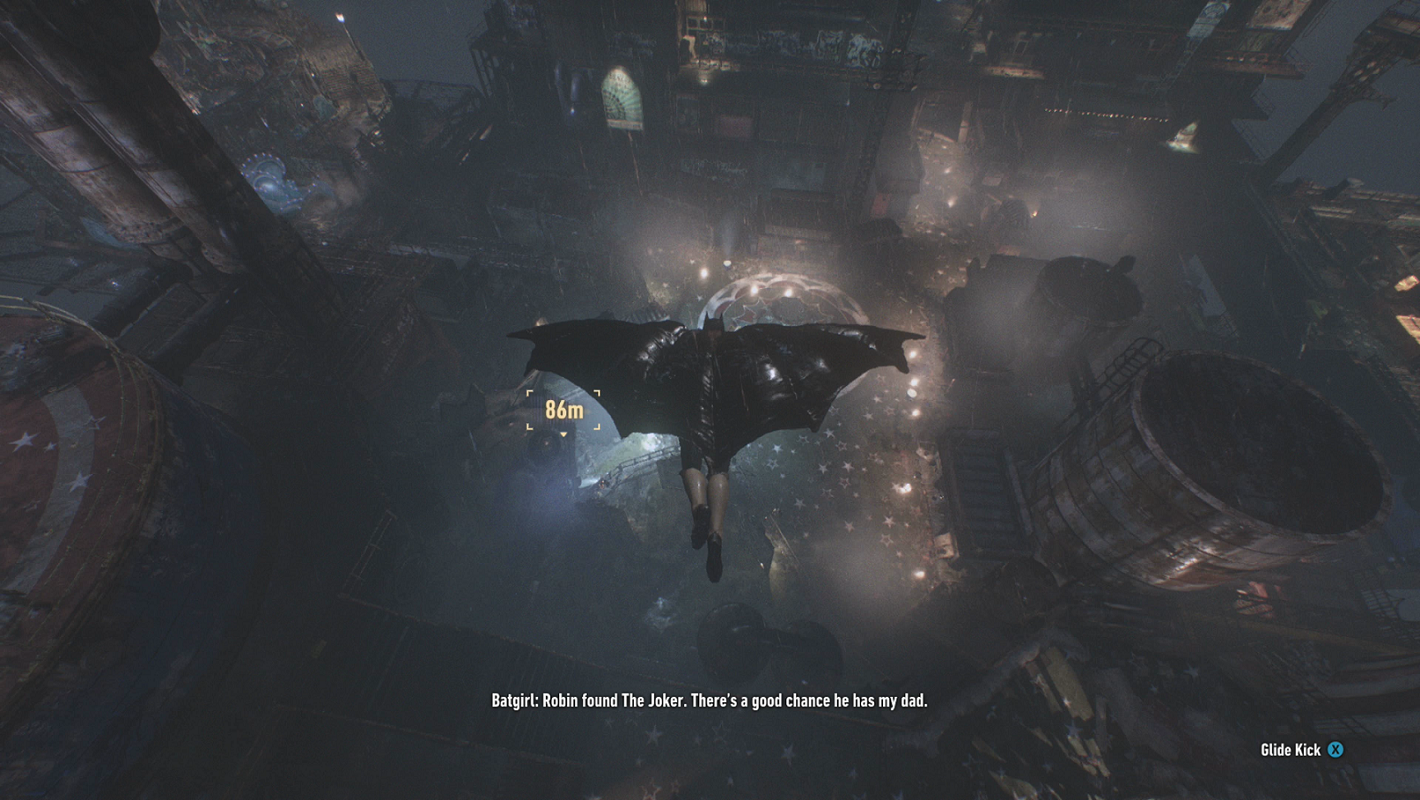 With only one exception, Batgirl can’t do anything that the Bat can’t already do. She has access to only half his gadgets and almost none of his tech or combat upgrades, and cannot earn experience or level up. When fighting she has access to only the most basic maneuvers. In a story-related way this makes sense, as she is merely an apprentice of Batman and not his peer, but in a gameplay sense it makes her somewhat dull in comparison to the empowering Crusader. The only thing she can do that Batman cannot is interact with more environmental objects with the remote hacking device, like scaring henchmen in her own version of fear takedowns. 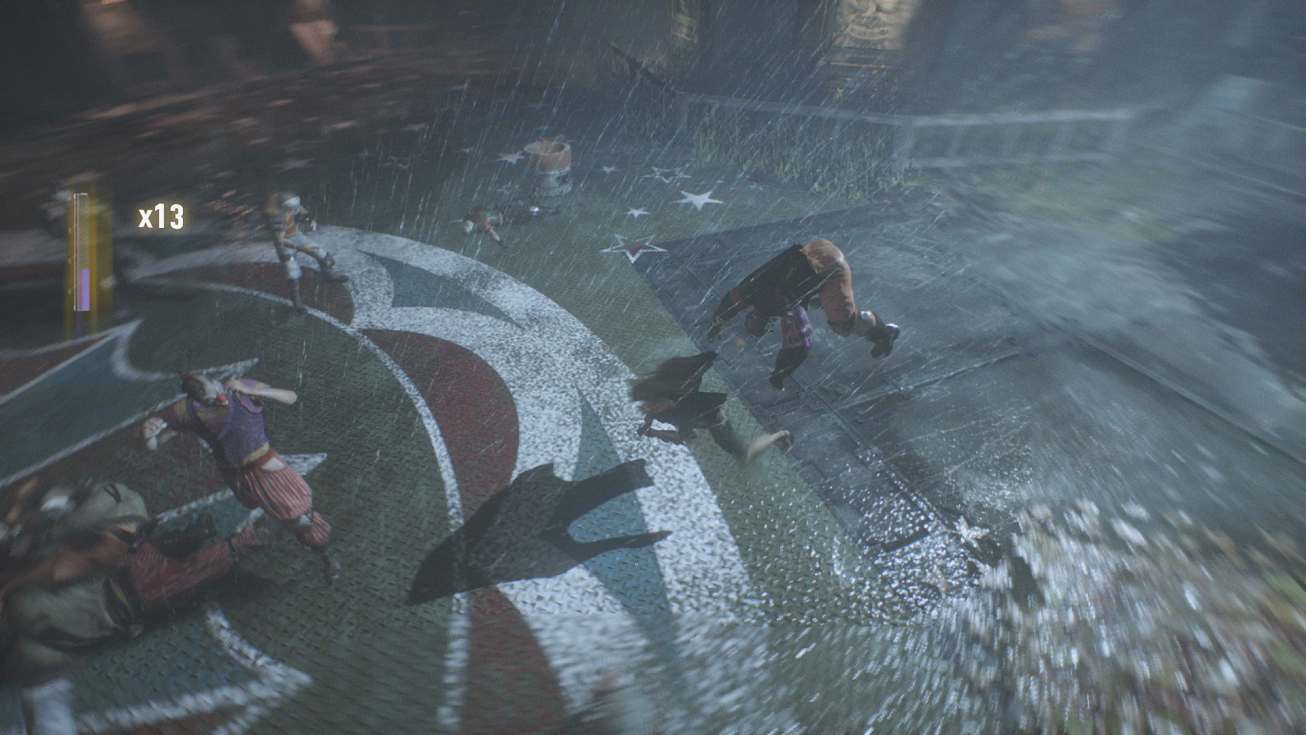 The campaign is all of an hour and a half long, and while it is the same great Arkham gameplay we’ve come to know and love, it doesn’t bring anything new to the table. Batgirl’s mission is to retrieve several groups of hostages scattered around the theme park while Robin locates the Joker’s bombs. There are a couple of predator rooms, some fights, and that’s about it. One of the predator rooms is one of the best in Arkham Knight, being very large and offering lots of hiding spaces, henchmen, and environmental takedowns. The other rooms aren’t particularly noteworthy. The fights are fun, if a bit short. There are also several timed fights that are rather tedious. Robin shows up for most of the fights, with abilities identical to his appearance in the Arkham Knight campaign. The only new henchman ability is the thermobaric grenade, which sends a cascade of flame through tunnels and flushes Batgirl out of grates.

There isn’t much of an open world to be had in 'A Matter of Family', as the hostage objectives have to be completed in a certain order. When trying to leave the ferris wheel, for instance, Batgirl turned around in mid-air and irritably informed me that we needed to stay there until all of the hostages were safe. In spite of this, the level design is pretty good, and Seagate is a fun, if tiny, map. At least the Batmobile isn’t here. 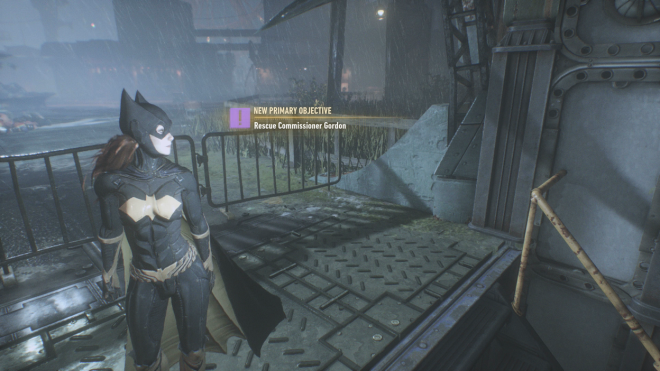 The Batgirl character model is pretty, stylish, and has some nice animations, although in combat she often uses the same takedowns as Batman (of course she kicks more - Batman’s suit doesn’t have high heels). Like 'Arkham City’s' Catwoman she is not as strong as the Bat but is quicker. Harley Quinn has a new model too, her black and red checkered catsuit from the animated series. Otherwise the game looks exactly the same as 'Arkham Knight', right down to the detective vision. I noticed less stuttering through 'A Matter of Family', probably because of the greatly reduced world size.

All of the voice performances are excellent, as usual. If the Joker has to be here for every single entry in the franchise ever, at least he is acted well. Ashley Greene returns to voice Barbara Gordon. Because the DLC takes place on Valentine’s Day, the conversations from the thugs center on how best to woo Batgirl and Harley, which serve as a comic relief. Another conversation has several thugs trying to imitate Joker’s iconic laugh, to great effect.

After the mostly linear storyline is complete, Batgirl has full access to Seagate and can glide around to look for balloons, chattering Joker teeth, and Harley’s jack-in-the-boxes. That’s it. 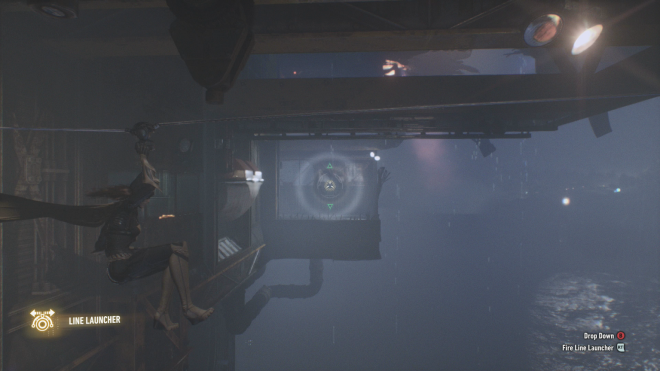 Warner Brothers has promised three pieces of story content for the 'Arkham Knight' season pass. If this little fragment of a game is what players can expect, then the pricey $40 season pass is going to be a disappointment. 'A Matter of Family' releases on July 21st for non-season pass holders at $7, but I wouldn’t recommend it.