The Game Itself
4 Stars
The Video: Sizing Up the Picture
3 Stars
The Audio: Rating the Sound
4 Stars
Replay Factor
2.5 Stars
Bottom Line
Recommended

Game Freak, the masterminds behind the wildly successful 'Pokémon' franchise, occasionally work on other games. Their latest is 'Tembo the Badass Elephant', a platformer published by Sega for PC, Xbox One, and PS4.

'Tembo' is a 2D sidescrolling platformer with a lot of energy and speed, not unlike the old 'Sonic the Hedgehog' games. The titular elephant is an accomplished soldier who has been summoned from his idyllic jungle island to combat PHANTOM, a mean military company that has started to take over Shell City. Tembo must dispose of the bad guys, save civilians, and of course pick up peanuts along the way.

In effect, Tembo is an action badass, but also a cartoonish elephant. Thus, a game name is born. 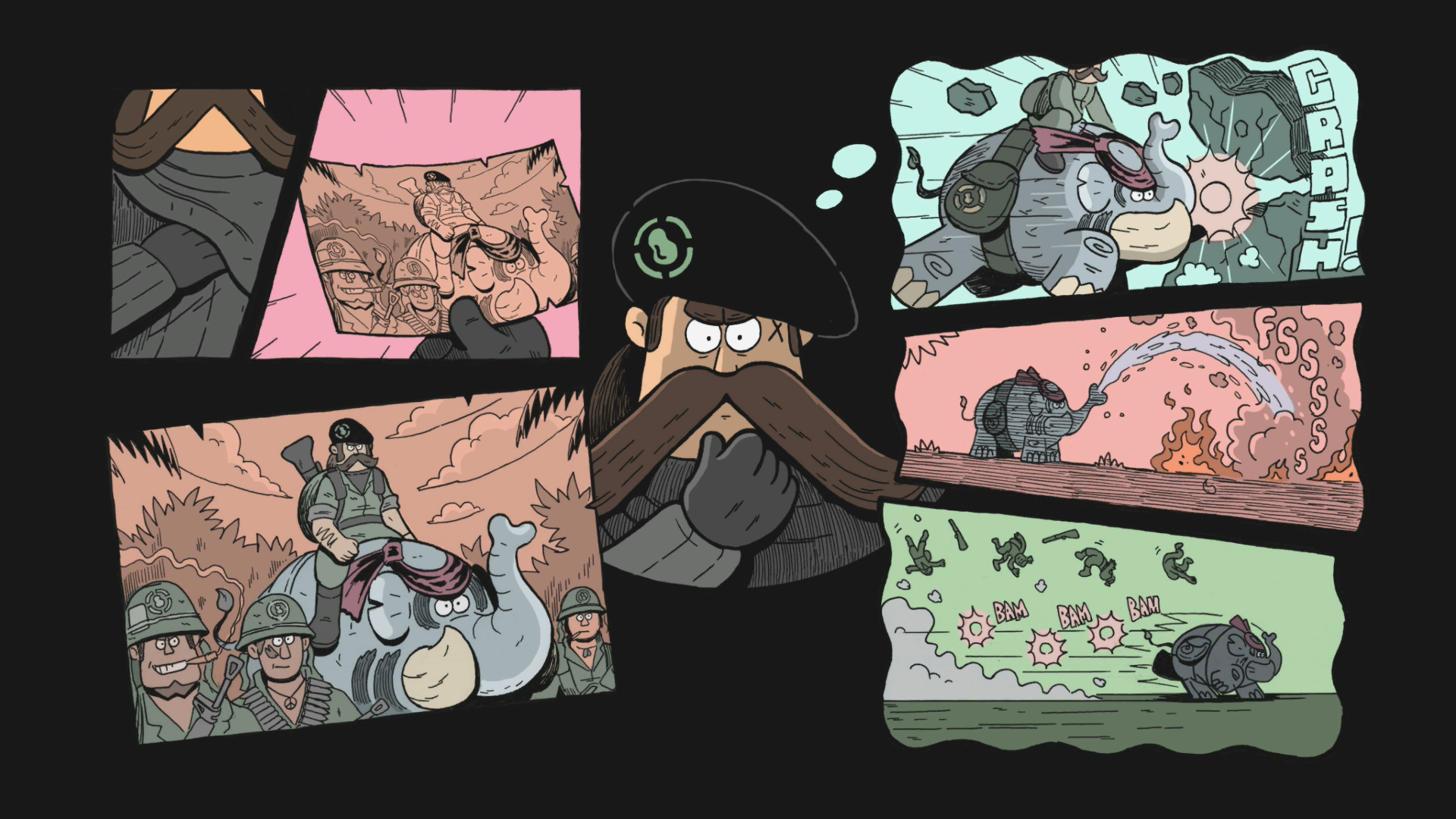 Tembo can use a few different attacks, like dashing, spraying water from his trunk, and the ubiquitous ground pound. Scattered liberally throughout each level are springs, cannons, and treads that greatly increase Tembo’s speed and jump height, often propelling him for huge distances and destroying much of the environment in the process. When not dashing, Tembo is quite slow and boring, which encouraged me to rocket through each level as fast as possible, collectibles be damned.

The enemies come in many forms, from lazy, stationary infantry to big tanks and mech walkers. Most of their projectiles are relatively slow and their attack routines can be quickly memorized, so they don’t slow down the action too much. In some levels, especially the later ones, many of the platforming elements take on a kind of puzzle quality. Some are bombs, or floating fiery skulls, or spikes, or some other dangerous feature that I had to navigate with precision, instead of by just smashing through it like I did with everything else. These segments aren’t bad, but not nearly as fun as the reckless smashing.

In every level there are forked paths that cannot be renegotiated, so if I chose the wrong one and continued the critical path, I was forced to abandon whatever peanuts or civilians were down the other path. Fortunately, the levels aren’t particularly long, clocking in at around 10-15 minutes, so replays aren’t too irritating. Tembo controls very well, with precise controls both on land and in the air, which is very nice when trying to nail big jumps or land in between enemies without taking damage.

For a platformer, 'Tembo' has a relatively heavy death penalty. Dying, either from being hit too many times or instantly when falling into lava/bottomless pits, results in a checkpoint restart and the loss of a peanut butter jar. Jars are collected by accumulating 300 peanuts, of which there are many in each level. Still, some of the checkpoints are spread rather far apart, and if I died before I reached the first checkpoint, I was forced to consume a jar just to restart the level, which seems like punishment for punishment’s sake. Thankfully, the difficulty stays at a manageable level throughout the game, and there are only 18 levels anyways (a few of which consist solely of shorter boss fights). 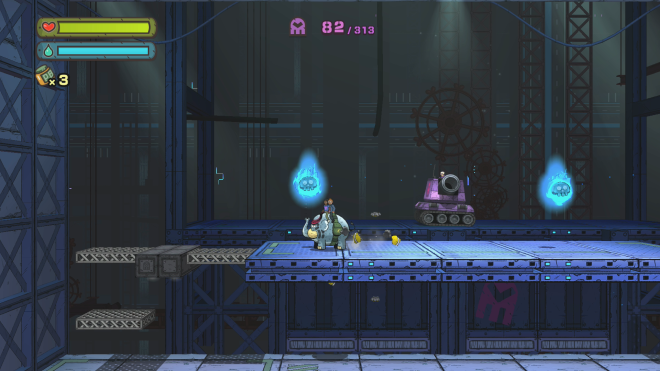 'Tembo' is very cartoonish, with lots of bright colors and stylized, comic book-style text exclamations whenever the pachyderm moves or kills something. The sharp edges almost give the game a hand-drawn look. Environments are nice, especially in the foreground, although the backgrounds can get fuzzy in some levels. The engine has a hard time keeping up with Tembo’s fast movement sometimes, especially when jumping after a long dash or killing an enemy. 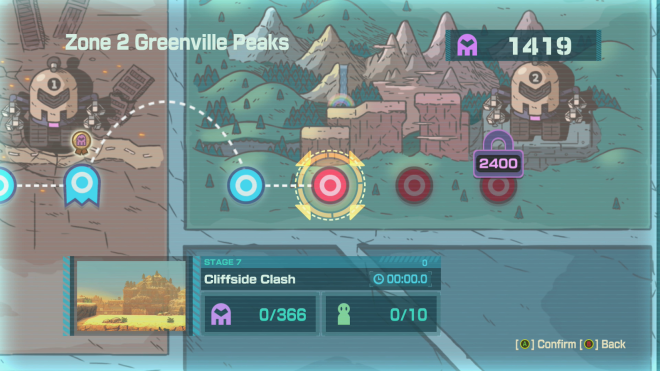 The high-energy, cartoon theme continues into the audio, where an electronic spoof of action movies plays throughout the game. The sound effects are perfect, although the game as a whole has a low volume and I had to crank my audio up significantly to hear everything. There is no voice acting.

The collectibles are civilians, which are easily tracked during each level and not terribly difficult to find. They don’t offer any gameplay bonuses; they’re only good for exploration and achievements. The other collectible is defeated enemies, of which a certain amount must be gathered to unlock the boss for each of the three stages. The game is just about the right length for its genre, at around 8-10 hours. 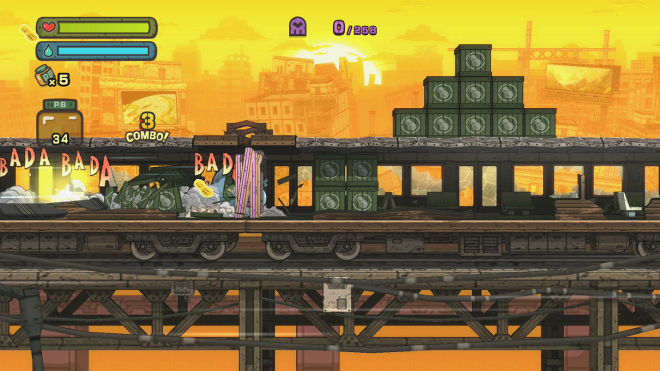 'Tembo the Badass Elephant' manages to rise above its silly name and offers a fun, fast platformer. It doesn’t have the personable story of 'Ori and the Blind Forest' or the charm of a 'Rayman', and it has a few issues with glitches, but there are far worse platformers to be had on the Xbox One.