The Game Itself
4 Stars
The Video: Sizing Up the Picture
3.5 Stars
The Audio: Rating the Sound
3.5 Stars
Replay Factor
4.5 Stars
Bottom Line
Recommended

'Don’t Starve' was first released in 2013 for PC. It has since been ported to several other platforms, including the PS4, PS3, Vita, and Wii U. (Check out the PS4 review here.) In 2014, an expansion was released, called 'Reign of Giants'. A separate, multiplayer-only game called 'Don’t Starve Together' has been available in Steam’s Early Access for the better part of a year. A second expansion, called 'Shipwrecked', is being co-developed by Capybara Games ('Super Time Force') and will release this fall for PC. This Xbox One version combines the base game and the 'Reign of Giants' expansion.

'Don’t Starve' is a 2D survival game set in a harsh wilderness. It is light on story, with each game beginning as the character wakes up in the woods with a skinny, malevolent man standing over them, taunting them to survive the night. The man then disappears and the player is left all by their lonesome, with hunger and the darkness creeping in. Tools, weapons, armor, structures, and lots of other things can be crafted using resources found in the world. Death is permanent with only a few exceptions, and all resources and the world itself are lost with each death. (The world map changes each time.) The only things the player keeps are any unlocked characters. There are no missions, quests, or tutorials. 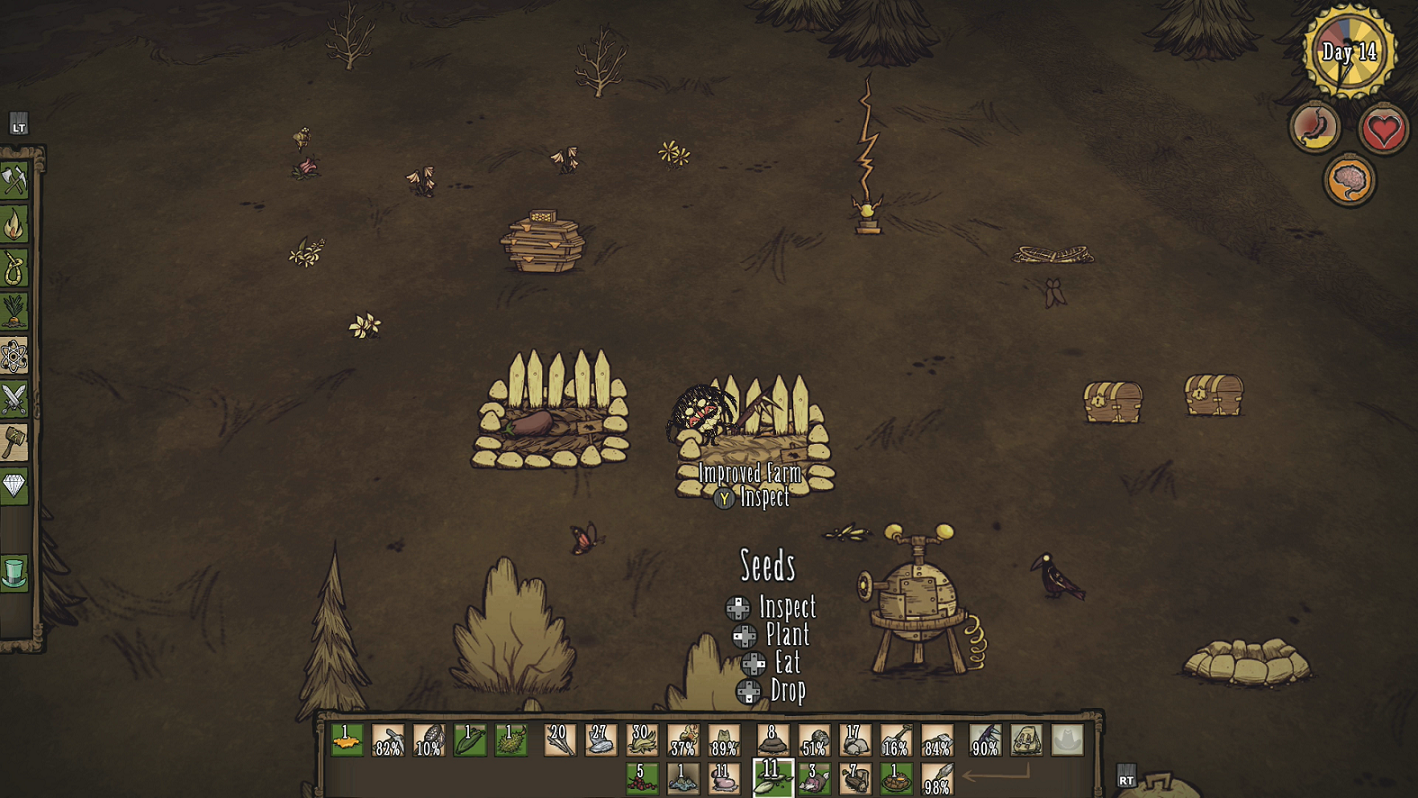 With my freedom in hand, most of my first few days in every playthrough are spent sussing out the map and gathering enough basic resources to craft a modest home. Once this was complete, I could then go on long expeditions to find more obscure resources and craft even cooler stuff. The world has its own ecosystem that operates independently of player activity. Some of the best experiences in a 'Don’t Starve' playthrough are stumbling upon an epic battle between swamp tentacles and spiders, or discovering a huge patch of killer bee hives, or innocently chopping down the forest when an enraged giant tree comes to life and starts beating me senseless.

Health, hunger, temperature, and sanity are the only resources that must be managed, but doing so can be difficult. Each season has its own unique challenges and powerful enemies that can emerge at any moment. These bosses are my biggest complaint about 'Don’t Starve'. I could spend weeks on the in-game calendar putting together a lovely base and a sustainable, ecologically friendly food supply, and then a nearly indestructible deerclops or bearger will appear and crush everything before sauntering off, leaving me staring wistfully at the ruins of my shattered dreams.

'Don’t Starve' succeeds in spite of its difficulty because of the focus on the player’s desire instead of a linear story. While the ultimate goal is survival for as long as possible (in Sandbox mode anyways - we’ll get into Adventure mode later), the large variety of crafting recipes and lack of direction let me develop my own goals. For instance, I am a crock pot enthusiast. I’m always trying to learn new recipes by tracking down obscure ingredients, instead of surviving on just carrots, berries, and rabbits. Other players like to build ornate, elaborate bases with lots of specialized rooms. For the truly brave, an underground world exists under the main map that is just as large as the overland, with its own creatures and rewards. 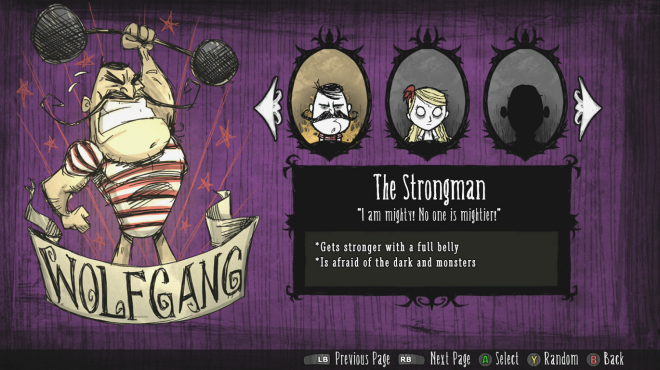 'Don’t Starve' has an art style that could best be described as eccentric. It resembles steampunk, Lovecraft, Poe, and plucky hand-drawn animation, all rolled into one. It’s not beautiful in a technical sense, and some of the objects tend to pixelate, but it’s still a lovely portrait. 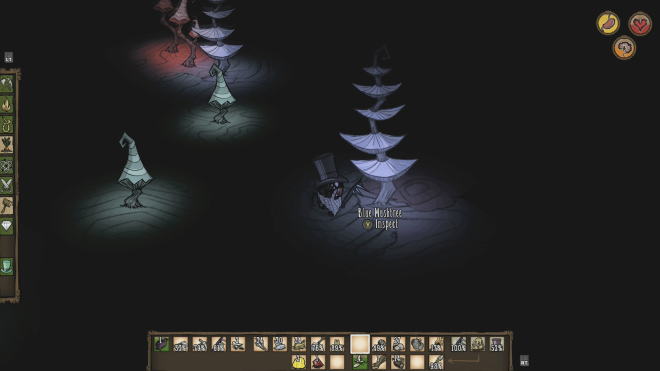 Each character has their own musical instrument that plays when they "speak" (i.e., text appears above their head while their mouths move). There is no voice acting. The music resembles carnival fare, even calliope at times. It is fun and whimsical, in stark contrast with the rather dark gameplay and constant threat of imminent death.

The Sandbox mode is played by default. Once the player crafts a divining rod, they can begin searching for Maxwell’s Door. The door leads to Adventure mode, compartmentalized challenges in worlds with pre-configured variables. One world is winter only, another has many islands that are only reached via sanity-draining portals, and so on. Adventure mode is the only story-like experience in 'Don’t Starve', and even then it’s rather light. Just like the gameplay, the narrative is laissez-faire, and pieced together with little clues in the characters’ dialogue. Currently it is a single-player only experience, and it remains to be seen if 'Don’t Starve Together' will be added in a future patch or paid expansion.

The 'Giant Edition' content is large, and makes sweeping changes to how 'Don’t Starve' is played. It adds a full seasonal cycle, complete with overheating in the summer and extensive rain in the spring, both of which can ruin a player without proper preparation. Several items have been added to help deal with the weather, like raingear and icy crock pot recipes. There are many new critters and plants, like electrified goats and the playful catcoons. The DLC also offers two more characters: Wigfrid the carnivorous viking, and Webber the spider. I particularly enjoy Webber because he excels at cave exploration, as spiders tend to ignore him. 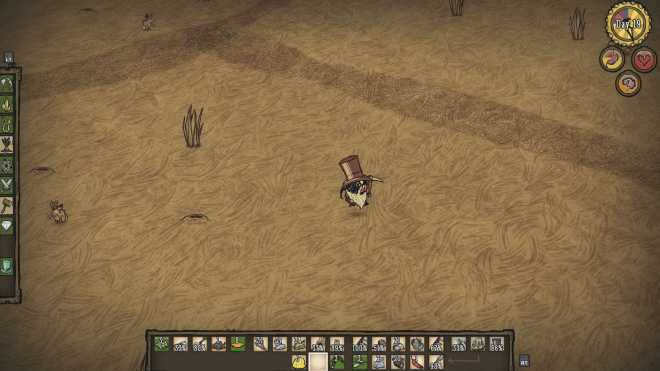 Like its forebears, 'Don’t Starve: Giant Edition' on the Xbox One is a delectable survival experience, and the included 'Reign of Giants' content does a great job of growing the experience. The game is tough, and the permadeath can be discouraging if you have spent several in-game weeks or months on an epic crafting bender, but it is worth the pain.