These days a decent headset is nearly as important a part of gaming as a controller. And finally, after years of complicated implementations, it's easy to pick up a wired headset that can be used with just about every major gaming platform just by plugging in a single cable. Naturally, Turtle Beach has a new headset that fits right into this PS4, Xbox One, PC, Mac, Wii U, 3DS, Vita, and Smartphone mold, and best of all, the Turtle Beach Star Wars X-Wing Pilot Gaming Headset comes complete with a full dose of Star Wars styling.

With an orange, grey, and black base, the X-Wing Pilot Headset needs only an array of insignia to achieve that same rebel pilot look that has endured ever since the original 'Star Wars' hit theaters. 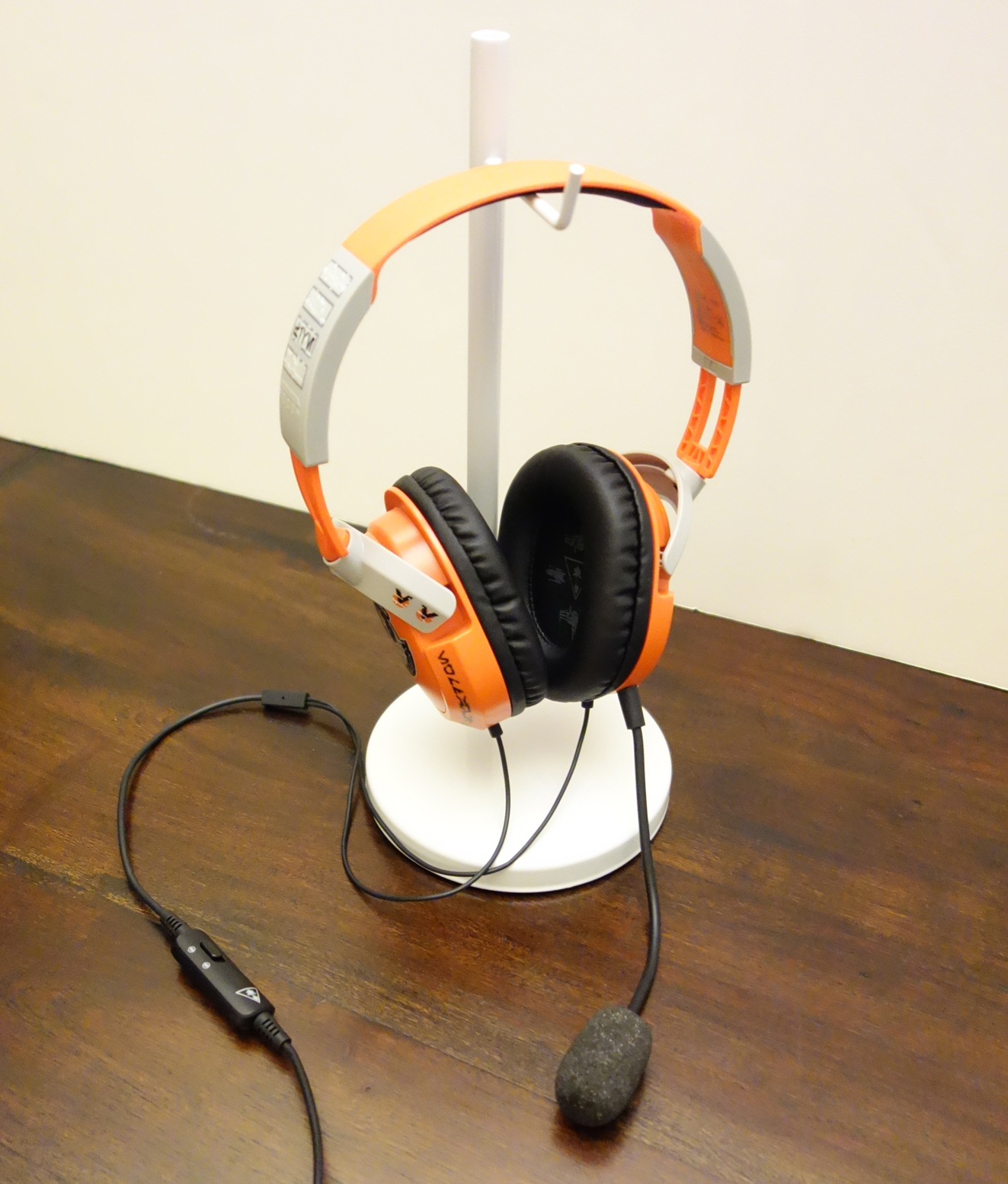 Normally, the garish look of gaming headsets seems to only confirm that idea that someone is trying too hard. In contrast, the X-Wing Pilot is like to happily catch the eye of every big 'Star Wars' fan of the last 50 years (and the next 50 years for that matter). I'll come back to the looks of this striking model later, but for now, it's enough to say that orange has never looked as cool as it does with the rebel pilots of the 'Star Wars' universe. 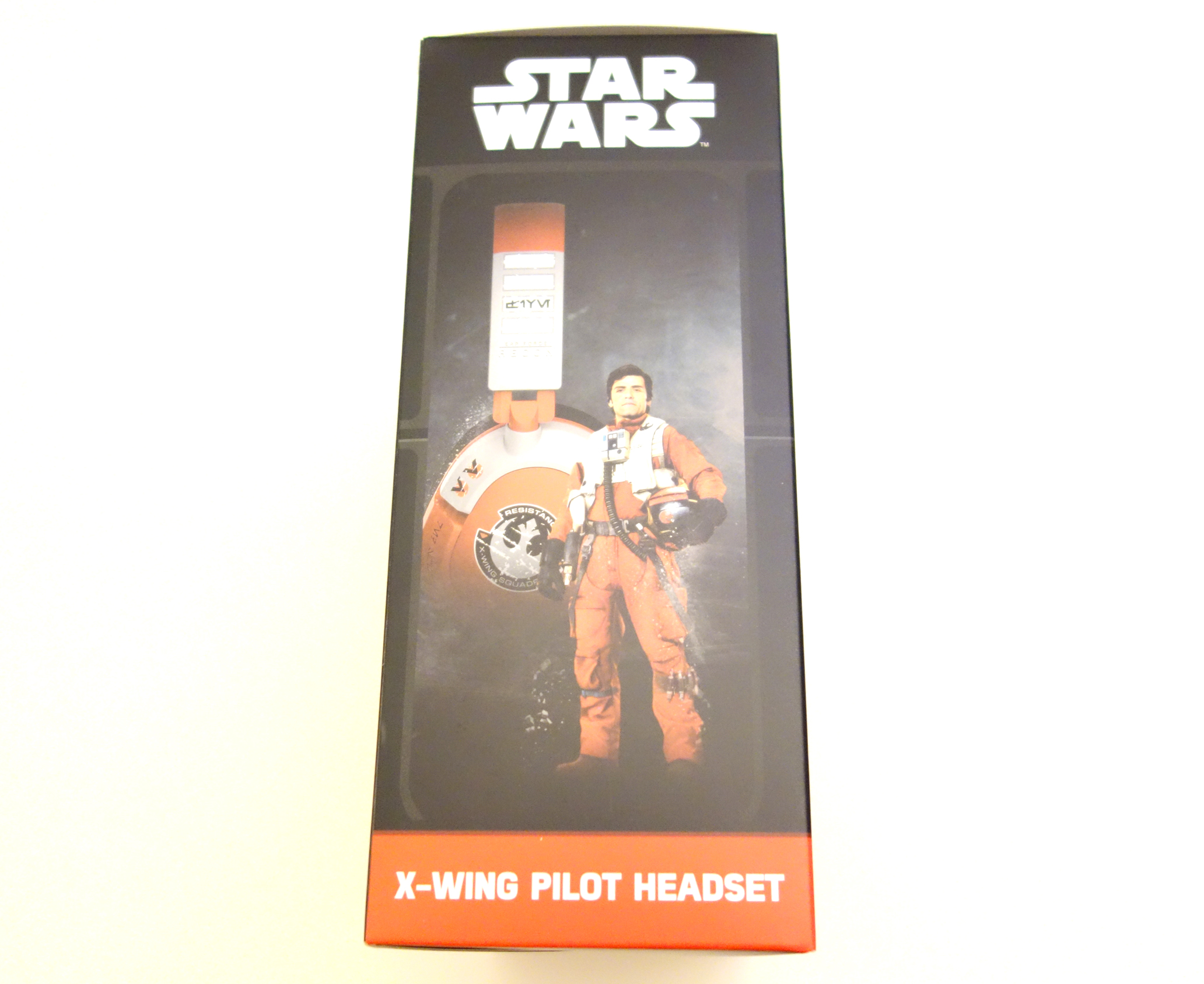 Underneath its 'Star Wars' looks, the X-Wing Pilot Headset is functionally a Turtle Beach Ear Force Recon 50. This isn't a secret as 'Ear Force Recon' is visible in two places on the headband while "Star Wars X-Wing Pilot" is written under the Model listing under the headband. The Recon 50 is one of Turtle Beach's newest models, and though I'd tried out the model a few times before its release, this review was my first in-depth time.

The results are nearly all-around pleasing. The X-Wing Pilot is an over-the-ear headset that matches light weight (about 6.7 ounces with the mic attached) to a pair of decent 40mm drivers and an inline volume and mic mute control cluster. One of the first things a wearer might notice about the headset are the two fixed wires that combine towards the inline controls. What this does is remove the need for any wiring in the headband. The ear cups have lots of swivel and can lay flat. With the light weight, the overall effect is pleasantly comfortable on my 7 and 3/8s size head (between mid and large size).

The passively driven drivers are very even, definitely not exuding bass. This makes the headset ok for music, but it's much better with games. Connected to a PS4's DualShock 4 or to the Xbox One controller, and the X-Wing Pilot does a nice job of bringing out all of a game's sound (music, sound FX, dialog, etc.) but without getting super powerful. (For the Xbox One, the X-Wing Pilot connects direct to the new controllers, but older controllers will require a Chat adapter or Chatpad.) I'm used to much more expressive (and expensive) headsets, but this design is the exact minimum sweet spot that I would recommend if Microsoft of Sony decided to offer headsets with the consoles (instead of the trash mono buds that are currently included). I played several hours of 'Fallout 4' on the Xbox One using the X-Wing Pilot, and I was very comfortable doing so. The headset does a nice job of isolating sound, which gives the drivers some room to work. When taking on zombies in 'Call of Duty: Black Ops III,' I felt like the X-Wing Pilot gave me the same kind of gameplay advantages I would expect from $300 stereo headsets. 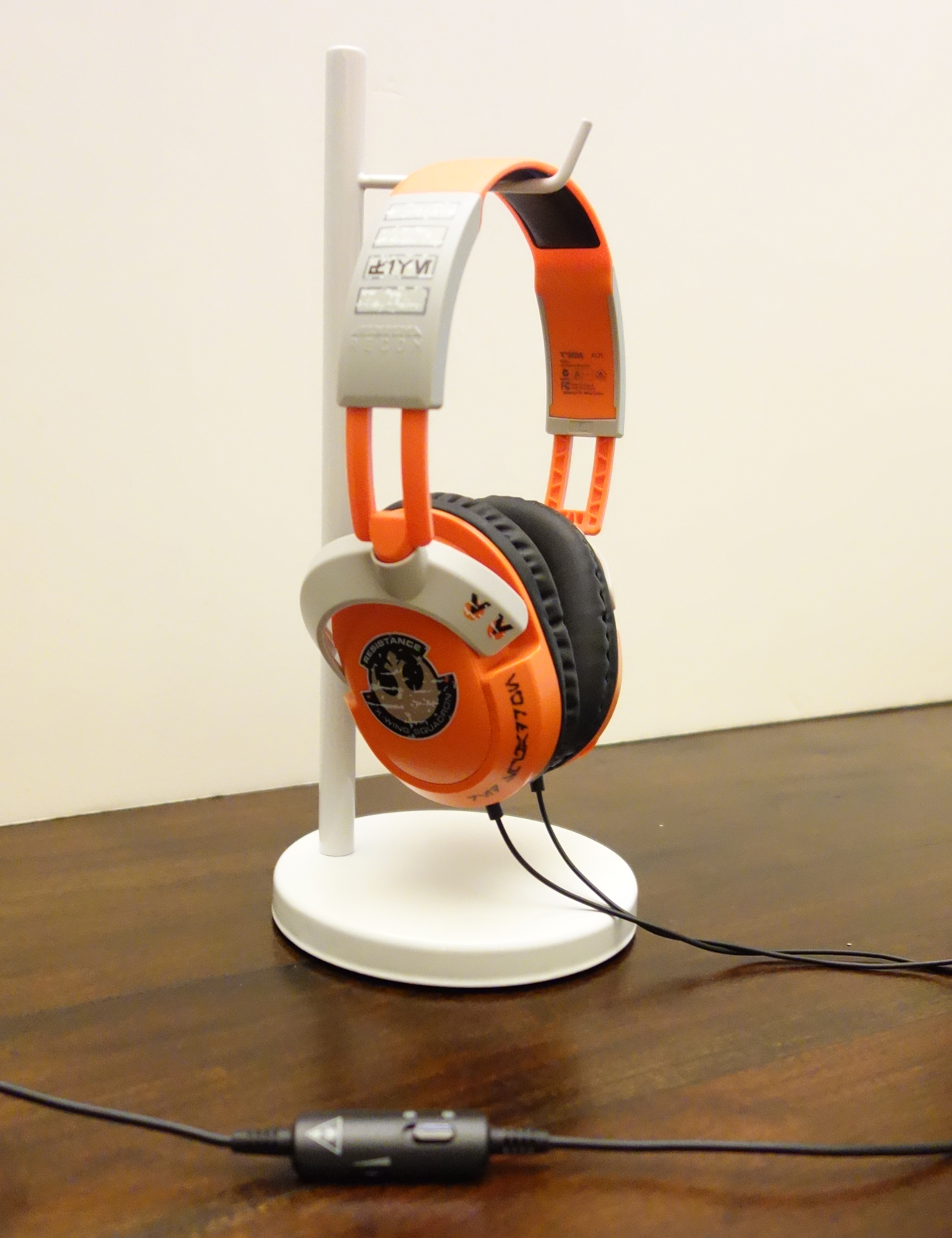 Naturally, hopping into 'Star Wars: Battlefront' on the PC, and the game's excellent sound design came right through. Even better, I could say things like "Rogue One reporting in," and feel that special thrill reserved for adult 'Star Wars' fans. The headset has a detachable boom mic that's firmer than other designs I've seen, but it's got a wind screen and the pick-up is perfect for gaming. The mic is easy to remove and to reattach.

The inline mic mute does its job, and the small volume wheel is an appreciated feature regardless of the platform. It is worth pointing out that both the mic and inline controls appear to be identical to the much more expensive Turtle Beach Star Wars Battlefront Sandtrooper Headset.

Because the X-Wing Pilot headset has the right weight and form factor, it's easy to use for hours on end, which is key for gaming, and the drivers can be counted on. There's a thin pad on the thin headband, but I never felt like the headband was pushing down, which is a typical trouble spot. When it comes to build quality, the X-Wing Pilot is chiefly made of plastic. The headband has plenty of flex and connects to the ear cups through a single pivot and a fork, which should hold up well to regular use. The cabling is fixed in place, making it the largest area of concern in terms of potential issues. My review unit has a squeak on the front where the fork connects to the ear cup, which suggests that the two pieces of plastic are connected too tightly. It doesn't affect use, but the squeak is there when I take the headset on and off. As a result, I'm docking the headset's review score, and I suggest any buyers check their models for such a squeak upon first opening the box. 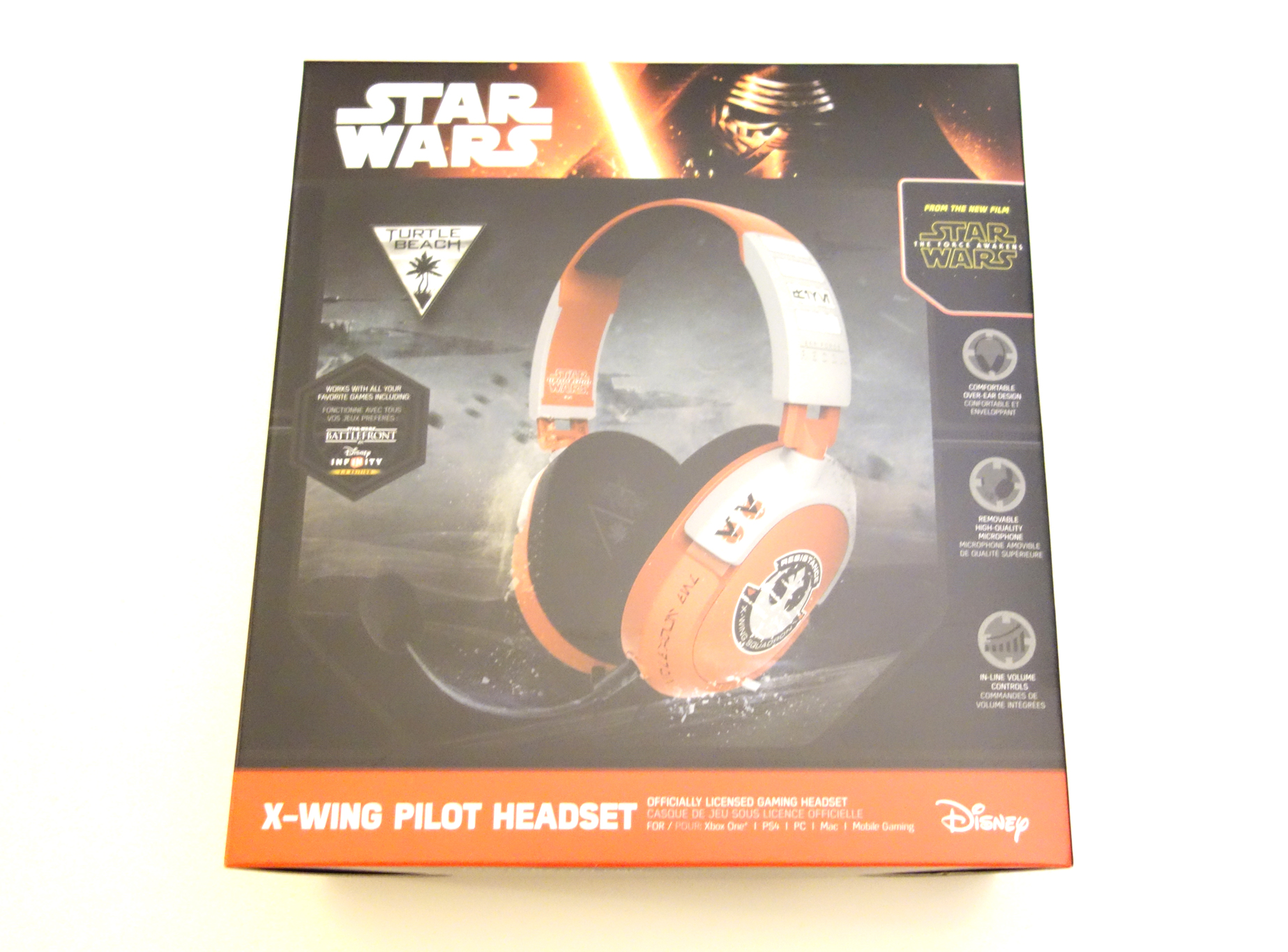 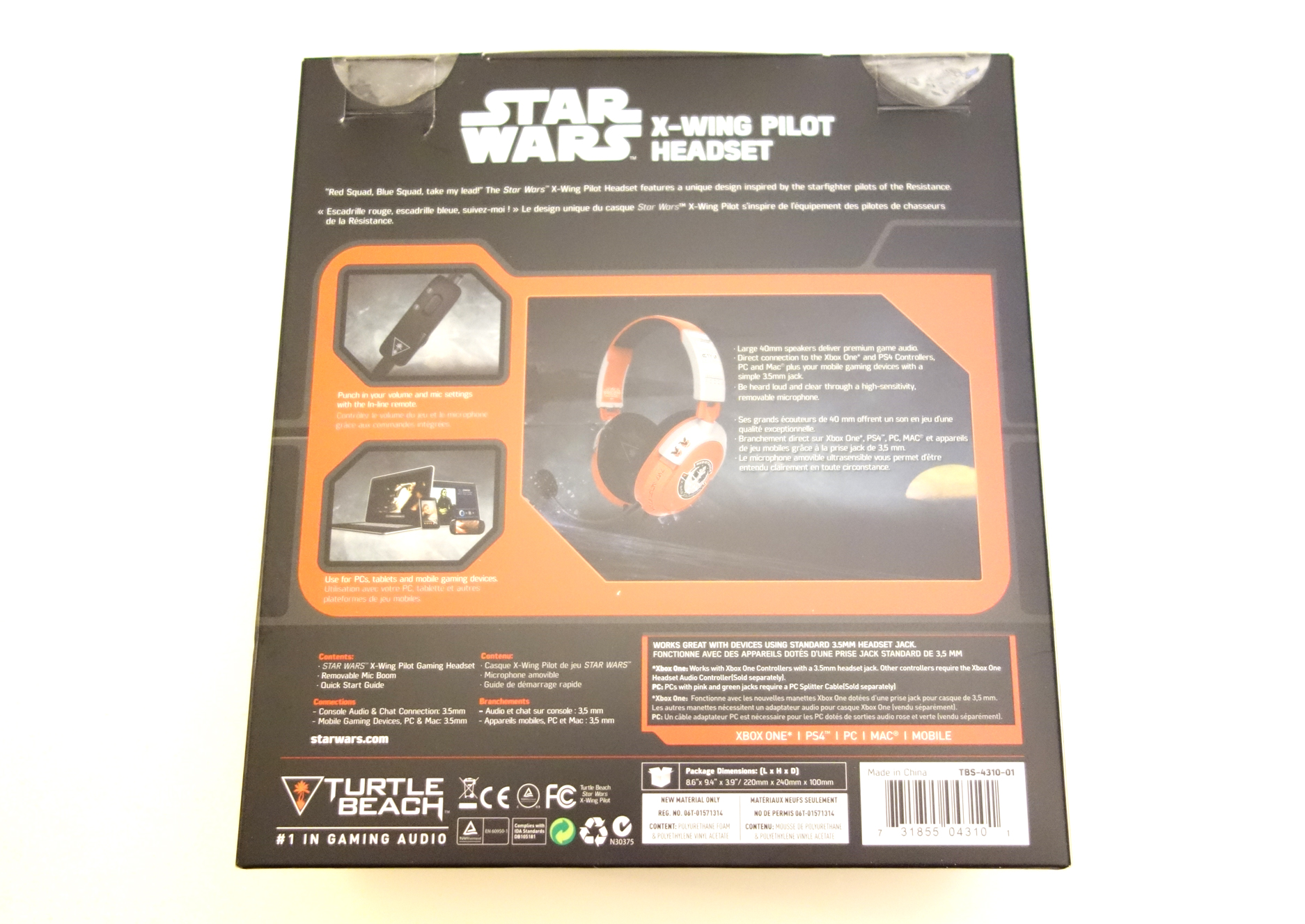 The X-Wing Pilot box is pleasantly splashed with Star Wars logos, which the headset itself does not have. (Some pictures show a white logo inside the headband, but that logo was not on my review unit.) Even so, when taking in the orange base and battle damaged insignia that are featured in about eight different places, the headset really does capture that rebel pilot/orange flight suit look. After looking over the X-Wing Pilot, the normal Recon 50's primarily all-black look is all-too boring by comparison.

The X-Wing Pilot's regular price is $10 more than a Recon 50, which is to say that the Star Wars looks do increase the price. Considering that this is on the low range for an over-the ear headset, that price increase could be a turn-off. At the same time, however, the Star Wars license isn't some copyright free thing, and some nice thought has been put into the look of this licensed item. Certainly, I know that giving my nephews a good gaming headset that is also styled well in 'Star Wars' regalia makes the extra cost seem well worth it. 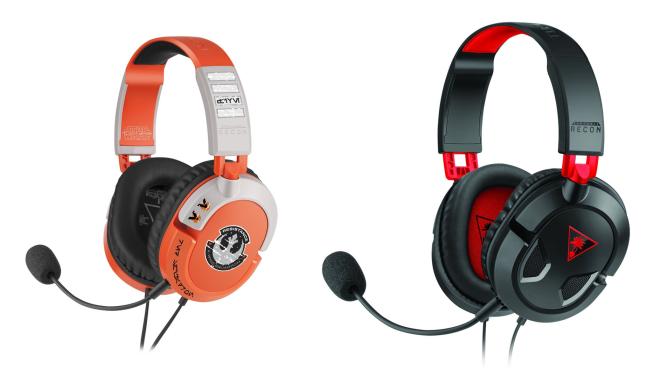 Between 'Star Wars: The Force Awakens,' 'Star Wars Battlefront,' and 'Disney Infinity 3.0 Star Wars,' 2015 does seem like a celebration of 'Star Wars.' What better way could there be to further that celebration than by donning the resplendent colors and capabilities of the Star Wars X-Wing Pilot Headset? And with it being the holiday time of year, a Turtle Beach Star Wars Headset is like two pretty great gifts in one.