Star Wars Battlefront Sandtrooper Gaming Headset reviewed on various devices, but primarily on the Xbox One, PS4, and PC.

Everyone who owns a PS4, Xbox One, Wii U, or capable PC ought to have a proper gaming headset, and this year, with so much excitement going on involving 'Star Wars,' there's no better time to considering owning and gaming with a headset inspired by one of the most timeless stories in modern culture. Exclusive to Best Buy, the Turtle Beach Star Wars Battlefront Sandtrooper Gaming Headset taps into the Sandtrooper variant of the empire's iconic storm troopers to make its visual presence felt. Underneath the sand worn insignia, this headset sports 50mm drivers, a detachable, flexible boom mic, inline mic and volume controls, and a standard 3.5mm 4 pole connection. 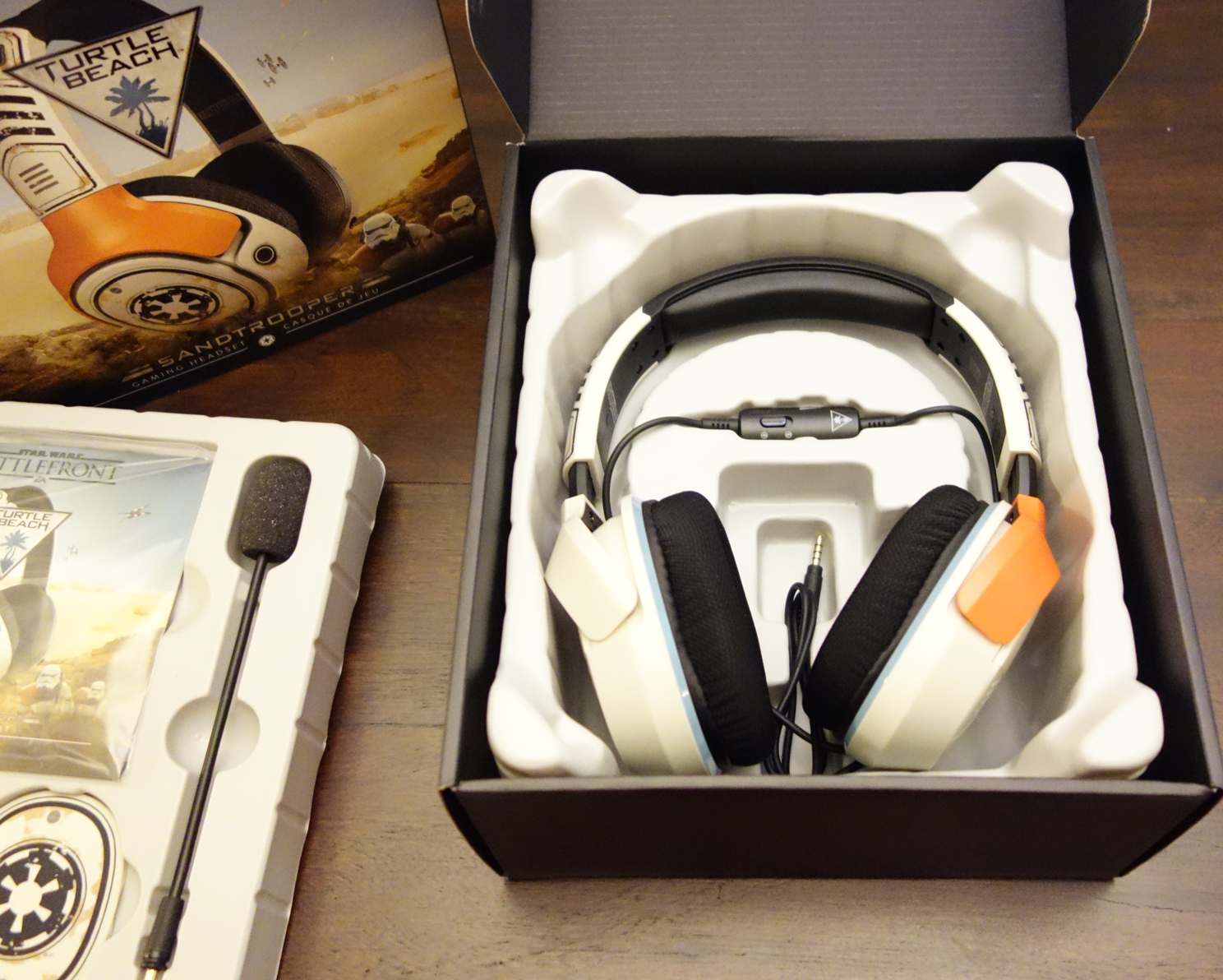 Because headsets are such an important part of modern gaming, special edition tie-in headsets are a somewhat common occurrence. Unfortunately, this often just comes down a decal or similarly minor change to a current headset or else, something cobbled together from parts usually meant for discount bin earphones. Not so for the Star Wars Battlefront Sandtrooper Gaming Headset. Not only is the headset built on one of Turtle Beach's most popular designs, but the sandtrooper looks filter through to just about every edifice of the headset.

I'll circle back to the Battlefront Sandtrooper looks, but one thing I can say about this headset's looks- the way it's captured in pictures is spot-on (which is often not the case with headsets for one reason or another). From the light sheen on the orange right fork to the faux wear and tear on the handband and ear cups, there's no Photoshop trickery here. 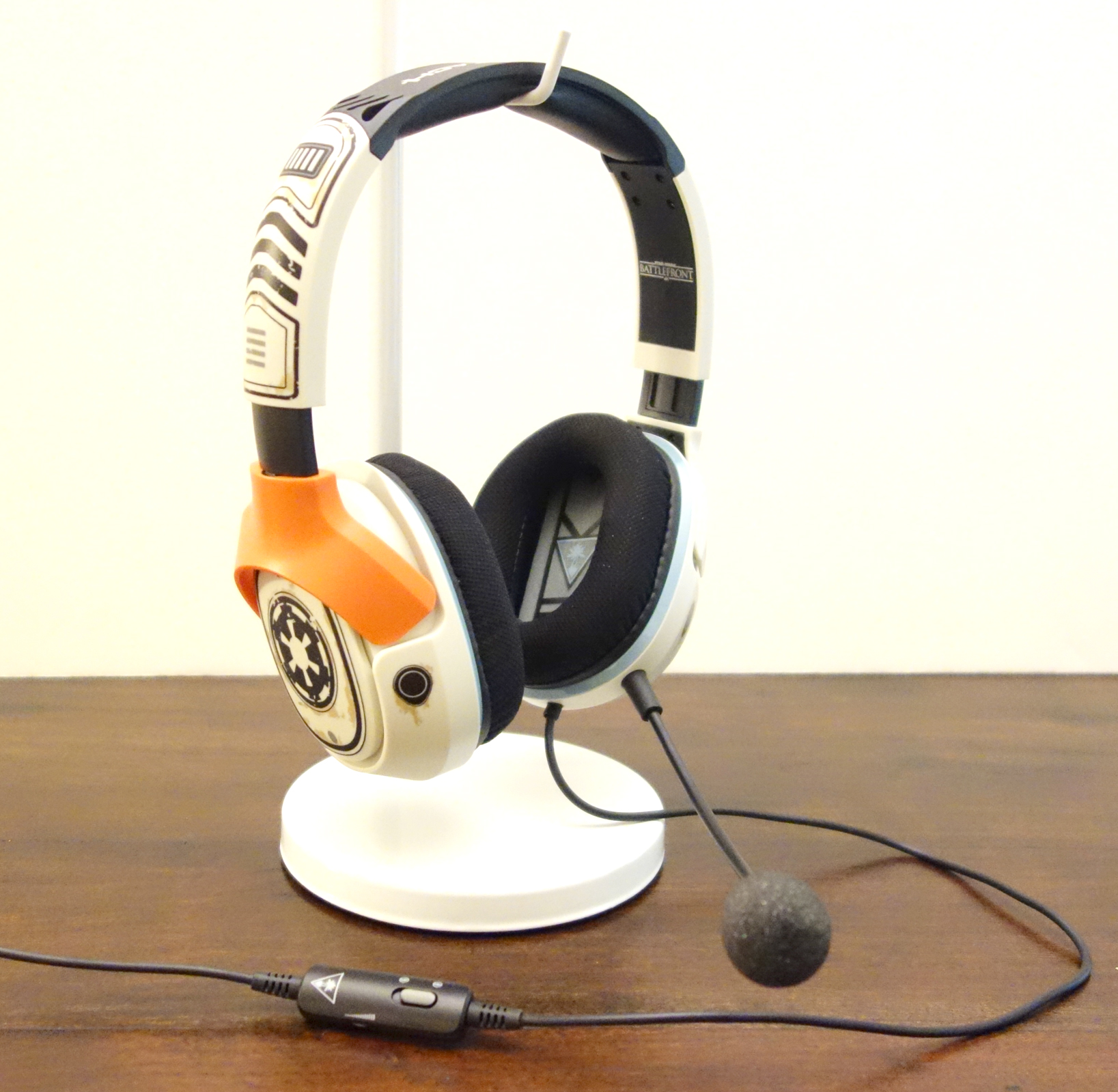 The Ears of a Sandtrooper

Cutting right to the chase, firing up 'Star Wars Battlefront' on the Xbox One while jacking the headset into a Xbox Elite controller felt like what the headset was made for. The new Battle of Jakku maps had just become available, and so I headed right into the Graveyard of Giants. This map involves a battleground set 29 years before the 'Star Wars: The Force Awakens,' and it's littered with the hulks of AT-ATs and other Walkers. Running through the sands and trying to take the Control Points in Turning Point, I was once again blown away by 'Battlefront's sound design. With the way that Turning Point works, I had to be able to pick up the sounds of enemy blasters, thermal detonators, and so on, while using my eyes to pick through scattered hulks. Make no mistake, the Battlfront Sandtrooper headset is made for gaming. There's strong bass here, but it won't kick in during a quiet moment, and it won't mask the sounds of nearing TIE Fighter.

The Battlefront Sandtrooper is a stereo headset, but it's not as binary as typical stereo designs. The headset has been tuned so that within each channel the need to fixate and track sounds in 3D space can be met well.

Since the headset uses a standard 3.5mm connection, using it on the Xbox One requires either one of the newer controllers or a Xbox One chat adapter, which is not included.

On the PS4, any standard controller will do. I dialed up some co-op 'Bloodborne,' a game which has some harsh sounds to it, but also has plenty of important audio cues. The pairing worked great, even coming alive as I creeped around the Hunter's Nightmare. 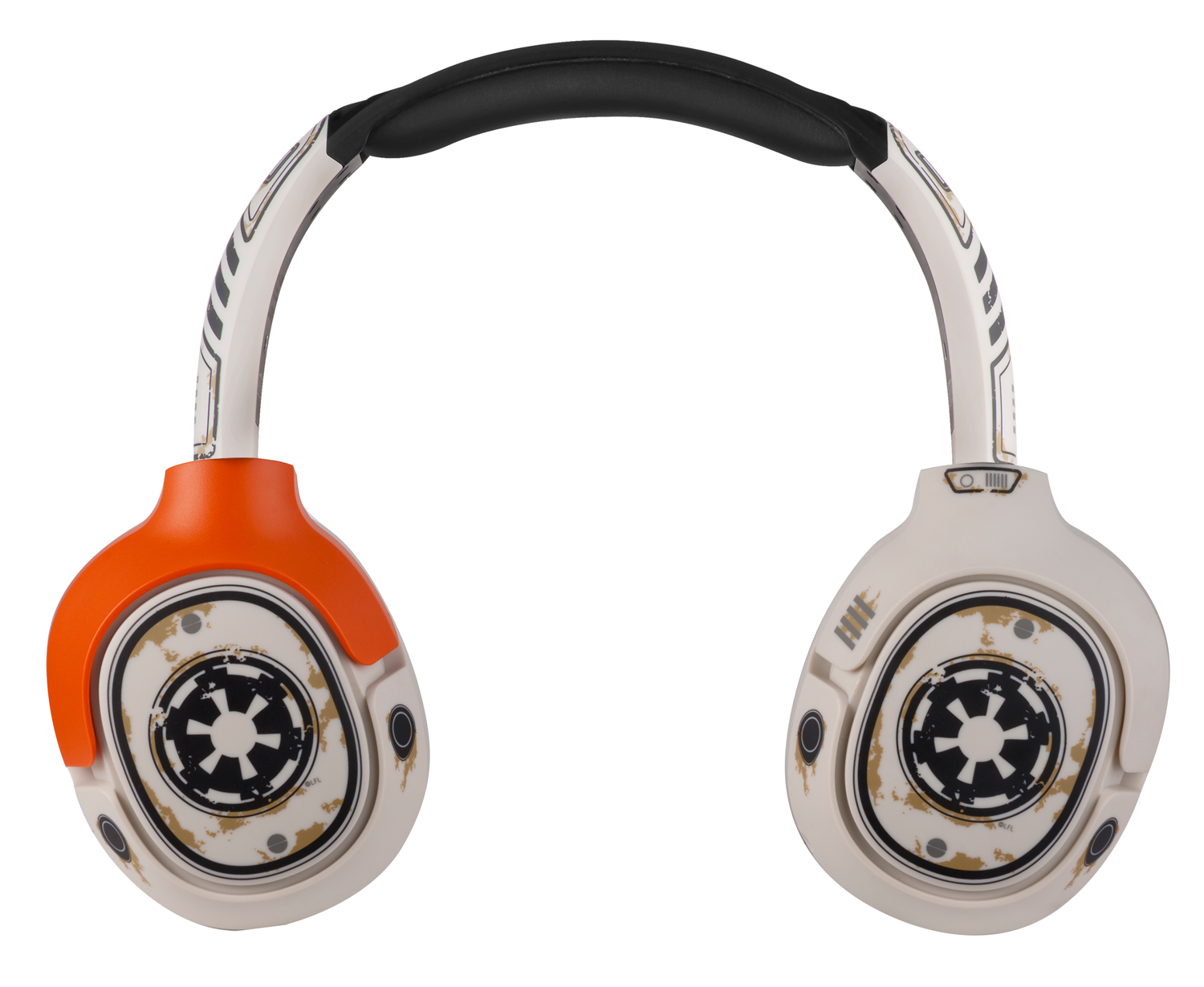 I love being able to go from console to console with the same headset, and I kept the co-op going by taking on some rounds of 'Plants Vs. Zombies: Garden Warfare' on PS4. The nice thing here is being able gripe at my co-op partners every time I went down. Really, though beyond the game's light-hearted surface, there is a need to not only factor in both the location of the enemies, who come in waves, and allies, but also all of the little plants, like the humble pea shooter, that I plant around to defend my garden. This pretty much happens via sound as I listen to hear my plants fighting back when rushing to and fro. These audio cues come in great via the Battlefront Sandtrooper, and the sounds of the game never feel too cluttered.

On the PC, I used a splitter to separate out the mic and audio connections for my sound card. Of course, on my laptops, it's nearly always one connection now. The point is that there isn't a splitter included, which didn't surprise but is worth noting. I decided to test the headset by freaking out during some co-op 'Dying Light.' You really can't go five minutes in this game without having a zombie or two suddenly decide to climb up behind you, spit up at you, or otherwise viciously harass you while you are trying to do some mission or looting related action. The Battlefront Sandtrooper did a great job making those freaky sounds feel all-too close, which is what the game's developers intended.

One reason for my use of scarier titles with the headset is that it does so well with dead quiet and sudden enemy or monster sounds.

As far as boom mics go, the Battlefront Sandtrooper's mic performs perfectly. It's exactly what I want in a gaming boom mic. The pick-up is strong, there is a wind screen, and the mic stays where I want it. This isn't a surprise since I really enjoyed this same mic when I found it on the Star Wars X-Wing Pilot. There was one difference, on the Battlefront Sandtrooper, I found the mic a bit harder to detach.

The inline volume and mic mute, which are also shared with the X-Wing Pilot, are appreciated. The mic mute is nice and smooth. The volume wheel is a little small, but it never accidentally or incidentally moves. This control set-up might seem like a small thing, but it's extremely welcome, especially on the PS4. Not that long ago, most headset makers seemed to have gone away from inline controls, and I'm thrilled that that trend has been reversed. 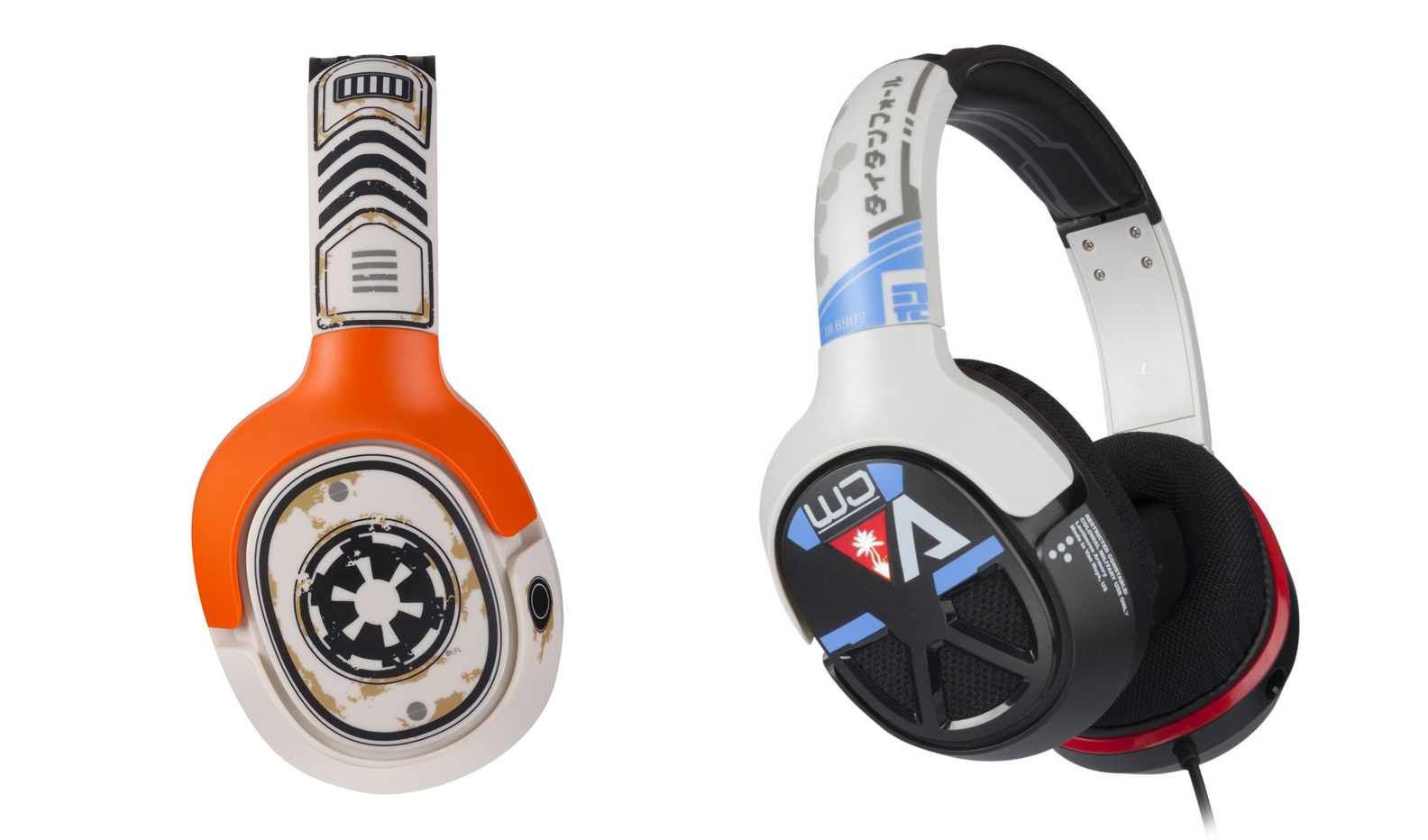 The body of the Battlefront Sandtrooper looks to be based off of the XO Four, but is probably much closer to in most aspects to the popular 'Titanfall Ear Force Atlas.' This is an over the ear headset and the 50mm drivers are brought to the user's ears with nylon sheathed padding. I like the nylon padding as it breathes well and resists fatigue. The rest of the headset's external body is rigid plastic, with the important exception being the pleather pad under the headband. The ear cups swivel and fold flat, and the results are firm, but comfy on my ears.

The plastics used have a heavy-duty feel, and I've found that sometimes the headband puts a little more pressure on my head than I would like. With the mic, the headset is about 10 ounces, which is pretty hefty for a passive, plastic shelled model. Despite the occasional headband pressure, I'm able to wear the headset for hours without any specific fatigue.

The cord is fixed on the left ear side. That could be a fail point, but since it's in the center, it doesn't constantly brush my shoulder or get caught when I set the headset down. The inline controls manage to be very light weight, which prevents all kinds of issues. 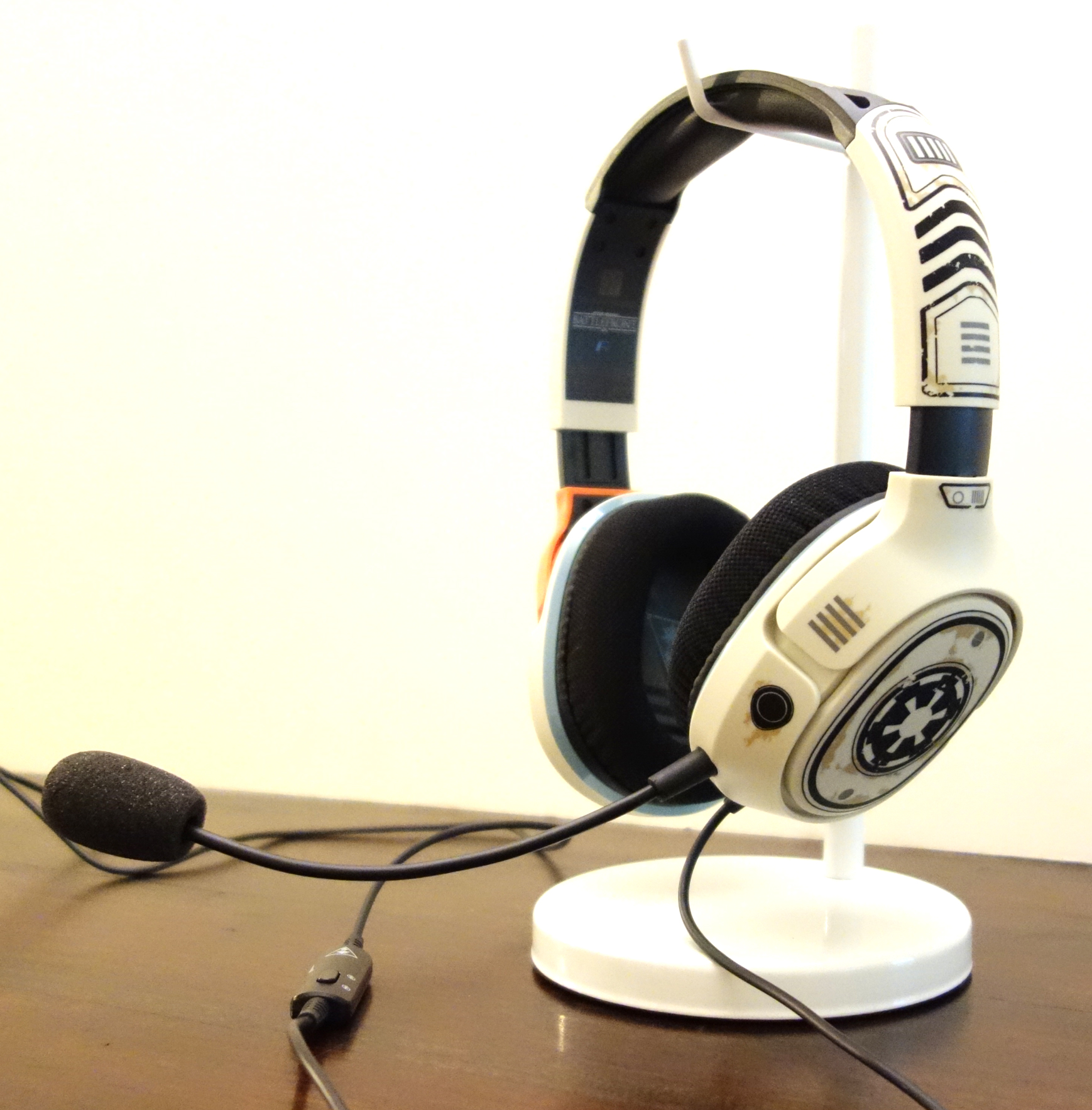 A person could look at the Battlefront Sandtrooper headset and decide that the plastic materials and the distressed-looking surface made the headset seem like a Tonka truck toy. This person presumably would have zero familiarity with the transcendent nature and prevalence of 'Star Wars.' Those first' Star Wars: The Force Awakens' trailers and the signature 'Star Wars' look and feel present in 'Star Wars: Battlefront' contain something electric.

When I was running around the Battle of Jakku, and I realized that I was really running through the destroyed hulks of AT-ATs, I smiled in delight, caught up in the wonder of a kid. That feeling was there when I opened the Battlefront Sandtrooper box and ran my eyes over all of the wear that was indicated. The original trilogy does not contain a pristine aesthetic; the machines and locales are on the whole, dirty and worn. A deployed Sandtrooper with an orange Pauldron on the shoulder and an infantry blue accent, would no doubt look a little weathered.

Not only do I like the look captured in the headset, I'm expecting with great confidence for some adolescent relatives of mine to love it. 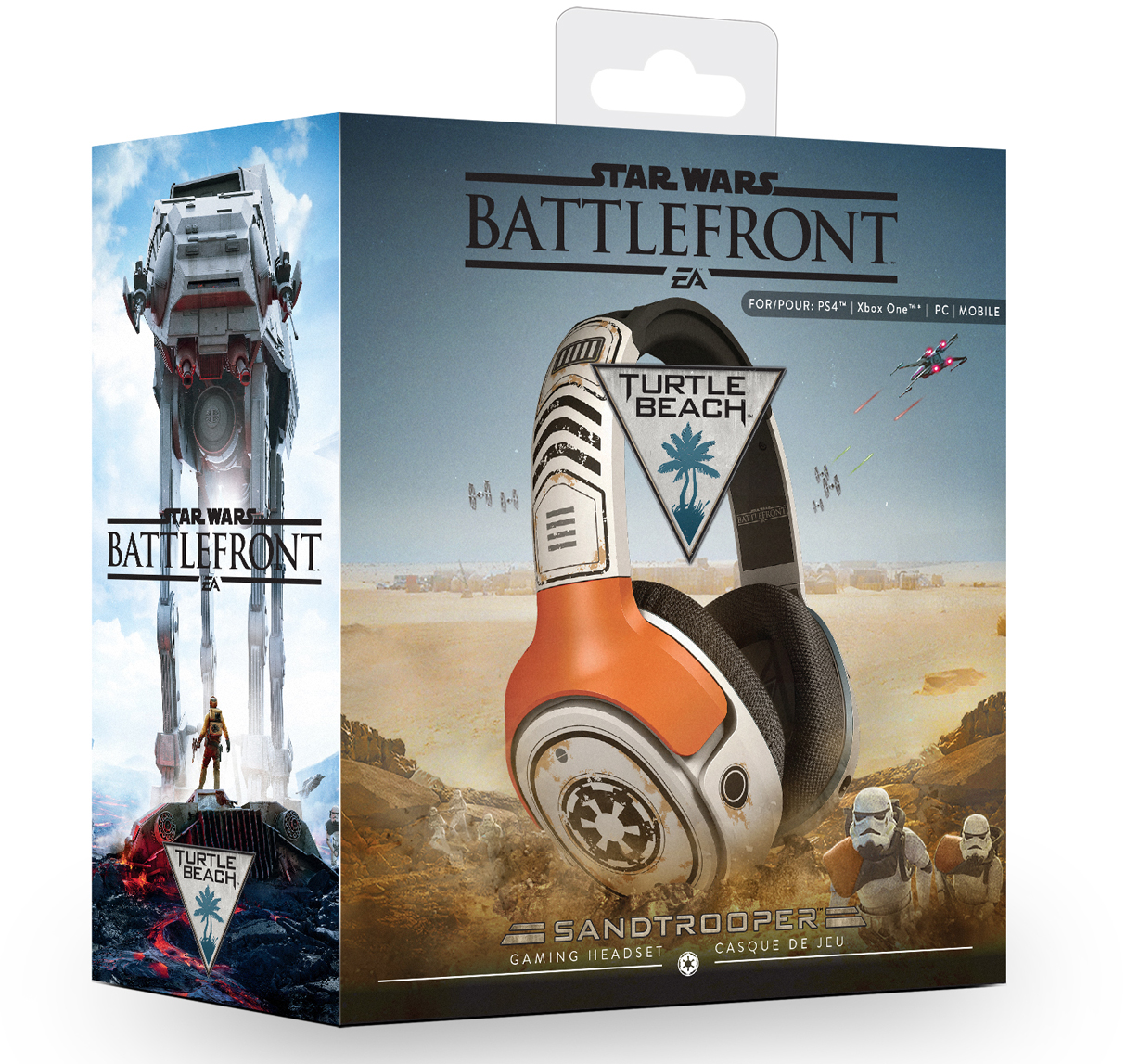 While the box is peppered with 'Star Wars Battlefront' logos, the headset itself only contains a single logo under the headband near the serial number. This headset is a Best Buy exclusive and was offered in a limited numbered version that also came with an extra set of speaker tags. My review headset is not a Limited Edition, and is neither numbered nor bundled with an extra set of speaker tags. While I wouldn't personally want to mess with the headset's look, it's possible that a set speaker tags may be offered at some point that could be swapped in according the wearer's whims. 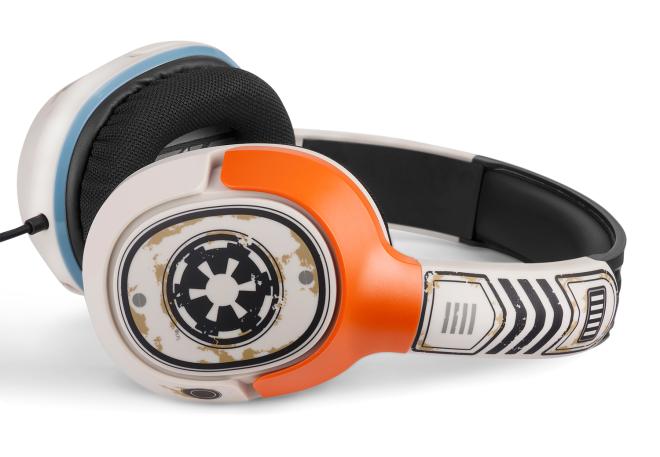 The Star Wars Battlefront Sandtrooper Gaming Headset delivers the 3D soundstage's of today's AAA blockbusters wonderfully, even while being connected to the controller. The Sandtrooper's looks are striking, and speak to the way that 'Star Wars' fans come in all ages. It's also nice to see Turtle Beach offering inline controls and multiplatform compatibility. I'd recommend picking up this exclusive while it's available and while 'Star Wars' couldn't be hotter as it will make a great gift.