The Game Itself
3 Stars
The Video: Sizing Up the Picture
3.5 Stars
The Audio: Rating the Sound
4.5 Stars
Replay Factor
4 Stars
Bottom Line
Recommended

'Mirror’s Edge: Catalyst' was produced by EA DICE (formerly Digital Illusions), a Swedish studio that also works on the 'Battlefield' and 'Star Wars Battlefront' properties. The first 'Mirror’s Edge' was released in 2008 and its parkour-flavored gameplay developed a strong following.

Faith is very young here, just being released from a juvenile detention facility after being caught on a run. She is a professional courier delivering messages from rooftop to rooftop in the futuristic city of Glass, where the government has complete control over electronic information. They like to read emails and texts, so anyone who wants to share a secret will hire people like Faith to run around the city and deliver notes by hand, the old-fashioned way. Runners are amazingly fit and the best of them can pull off near superhuman stunts of athleticism as they move around Glass, climbing walls, flying around on ziplines, and beating up cops as needed. 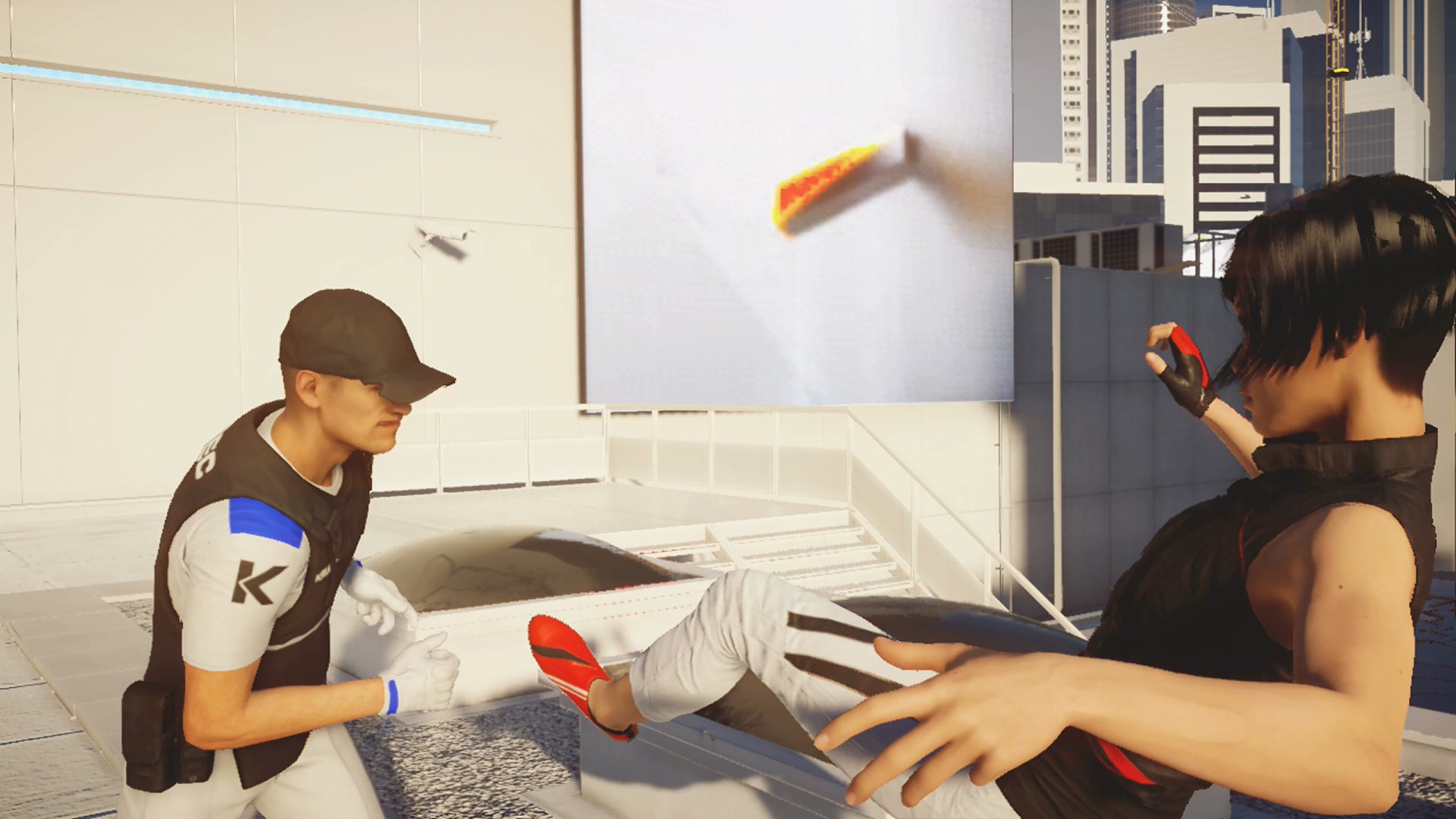 The movement of 'Mirror’s Edge: Catalyst', by far its most important aspect, feels at least as good as it did in its predecessor. The feedback from Faith is substantial and the game does a great job at making me feel like a parkour master, as I sit comfortably in front of the TV with the controller cradled in my hands. When she hits the ground too hard or whiffs a particularly ambitious jump I wince a little in sympathy, which I can’t say for other freerunning games like 'Assassin’s Creed' or even 'Dying Light'.

Faith has a few more tricks up her sleeve this time around, like runner vision, focus, and a rope. Runner vision is part helpful buddy and part cheat - it is a ghost that moves in front of Faith, showing a path to the next objective. It is an extension of the red-hued assistant from the first game, which highlighted pertinent surfaces in the environment. I think that was just the right level of assistance and runner vision is perhaps a bit too much, although it can be toggled on and off at pretty much any time. Without it, I felt like more of a DIY explorer instead of just following the paint-by-numbers. It’s a bit clumsy sometimes because the path can be cleverly hidden amongst office furniture and the like, but it often resulted in fun alternate paths.

Where 'Catalyst' succeeds in running it thoroughly fails in combat. In some missions Faith is expected to fight enemies to conclusion, in others only to get around or through them as quickly as possible. When they are used as speed bumps it only helps the freerunning, lending an element of tension and danger. However, whenever I had to actually stop and fight the cops, their ineptitude was almost laughable. Their animations are stiff and they are no more a threat than any drunken riffraff would be. Even the later specimens, purportedly tougher and more agile, can be knocked down with a few kicks. 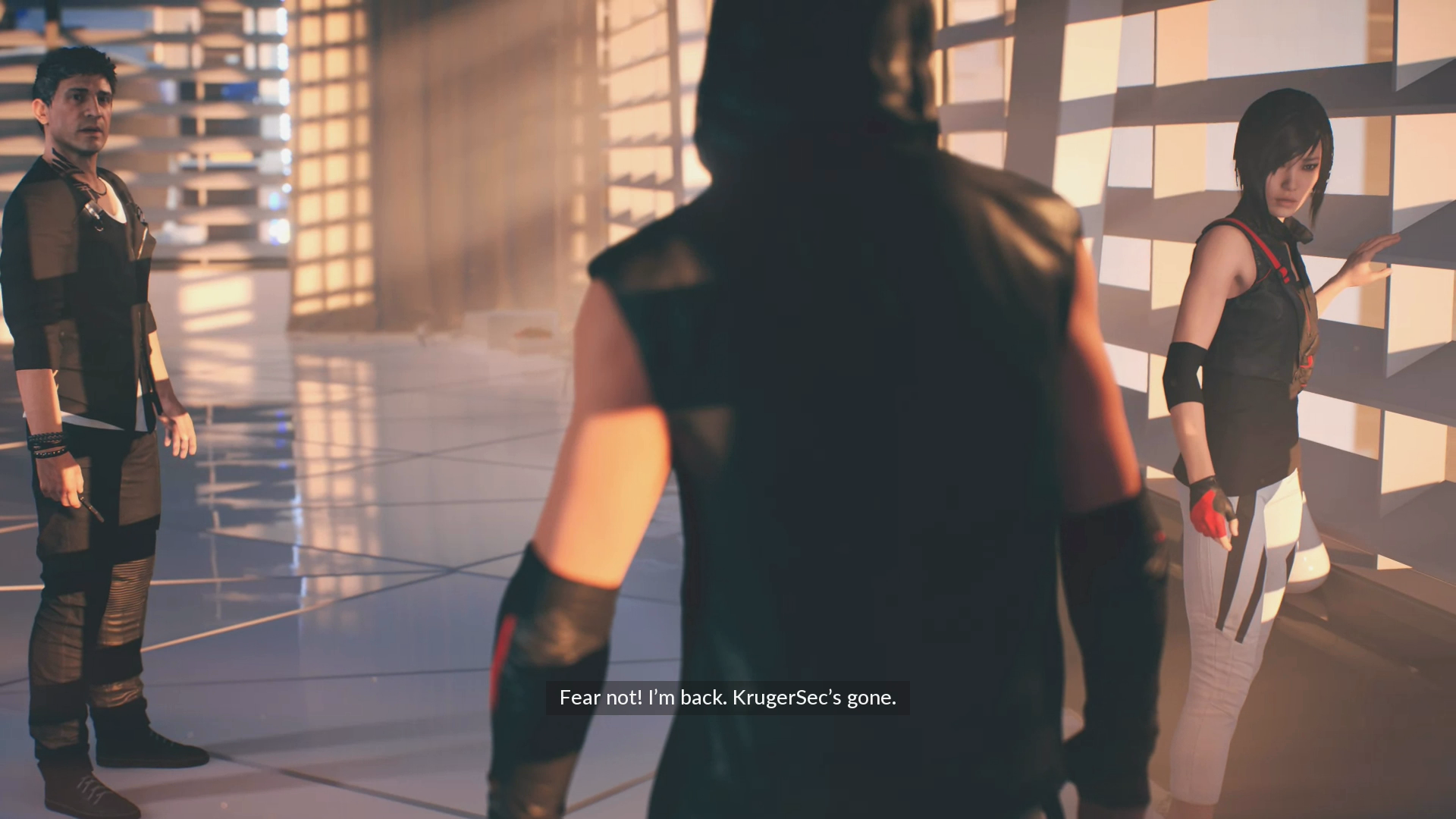 The focus ability is mostly invisible and gives Faith a speed boost occasionally or lets her dodge bullets from sniper enemies. It didn’t really add much to my experience; it was just a little mana bar in the bottom left of the interface that went up and down with my speed. Faith is still perfectly capable of landing sick jumps or taking down squads of armed cops single-handedly without it. The magrope upgrade works better than I had expected, and let me traverse otherwise difficult or impossible spans.

The story is another weak point of the 'Catalyst' experience. Faith and her mentor Noah are the only characters I can stand to watch; the others are annoying caricatures or, in the case of Icarus, just endlessly whiny and insufferable. The script, about Faith learning more of the circumstances behind her parents’ untimely deaths and the disappearance of her sister, is decent. However, the pacing and dialogue are strictly B-level, and not the good campy kind. The story takes itself very seriously but flounders in its attempt to relate to the viewer. 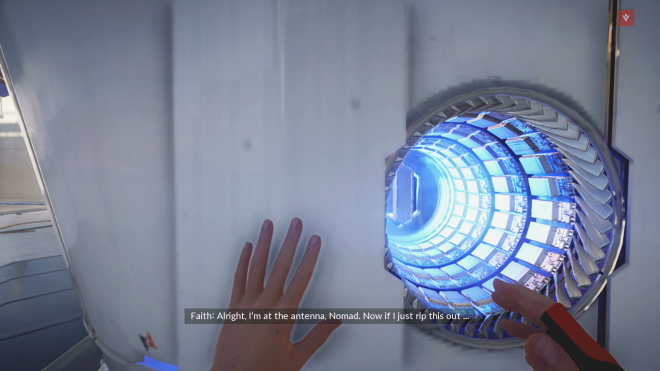 Textures and overall performance have been cleaned up from the beta, but there are still issues with draw-in and geometry, not to mention the character animations that we previously discussed. (No doubt, the resolution has been sacrificed in order to help the framerate.) The game in general would lose almost nothing in quality from simply removing all cops and combat scenes, to be honest. The cityscape of Glass is stark, almost glaring in its color and presentation, fitting for a dystopian government attempting to create a utopia. 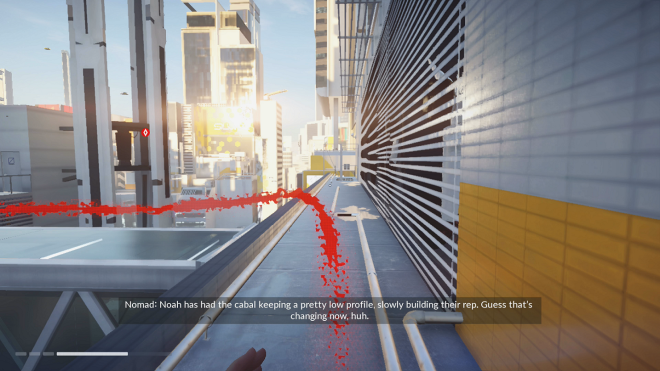 The sound effects are simultaneously modest and excellent, consisting primarily of footsteps, the slap of Faith’s palms against surfaces, and the squeaking of her shoes. The ambient-themed score, again composed by prolific electronica artist Magnus Birgersson, deftly accompanies Faith through this sterile and futuristic landscape, quietly lending a soothing aspect without overdoing itself.

'Catalyst' is a typical open world experience. There are side missions and collectibles galore, each with XP that can upgrade Faith’s abilities. Dashing around and finding things is its own reward, but the city is relatively small and it became too recognizable after only a few hours. It also lacks any kind of exploration mechanic, which is important for getting players invested in actually collecting and doing all this side content. After the backtracking was too much I started looking for alternate routes, but there are only so many of those to go around.

The content is buttressed by what DICE refers to as "Social Play", a kind of asynchronous multiplayer where time trials are created by the playerbase and not necessarily the devs. Players can also drop geocaches for each other to find. Some of the time trials are awesome and some are not, as is expected with user-submitted content like this. As with the regular trials, there are almost always multiple options for me to take to keep shaving seconds off my times. 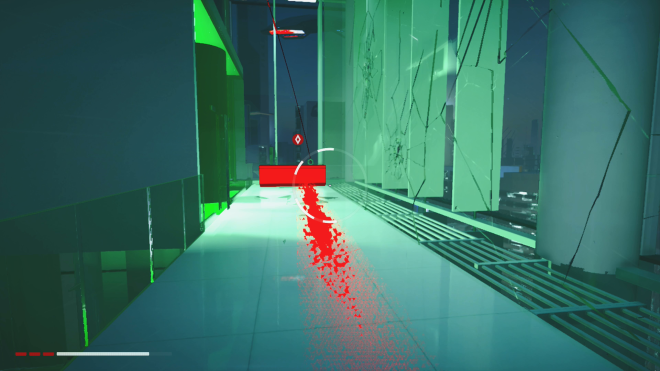 The first 'Mirror’s Edge' was a surprising risk with interesting gameplay that developed a niche audience, and its follow-up tries, mostly successfully, to recapture that same effect. There are stumbles with its open world, combat, and narrative, but Faith's freerunning world persists. Chasing after every red zipline, railing, and air duct is still fun eight years on.