'Far Harbor' is the newest DLC for 'Fallout 4', following 'Automatron' and 'Wasteland Workshop' in the season pass catalog. 'Far Harbor' is big kahuna story expansion as far as the initial 'Fallout 4' DLC slate is concerned.

'Far Harbor' is an add-on in the vein of 'The Elder Scrolls: Oblivion's 'Shivering Isles' or 'Fallout 3's 'Point Lookout'. A large map has been added outside of the Commonwealth, somewhere up off the coast of Maine where an island is having growing pains. The nukes left this area relatively clear, but a radioactive blanket of fog has taken on a life of its own and is slowly squeezing out the human inhabitants. 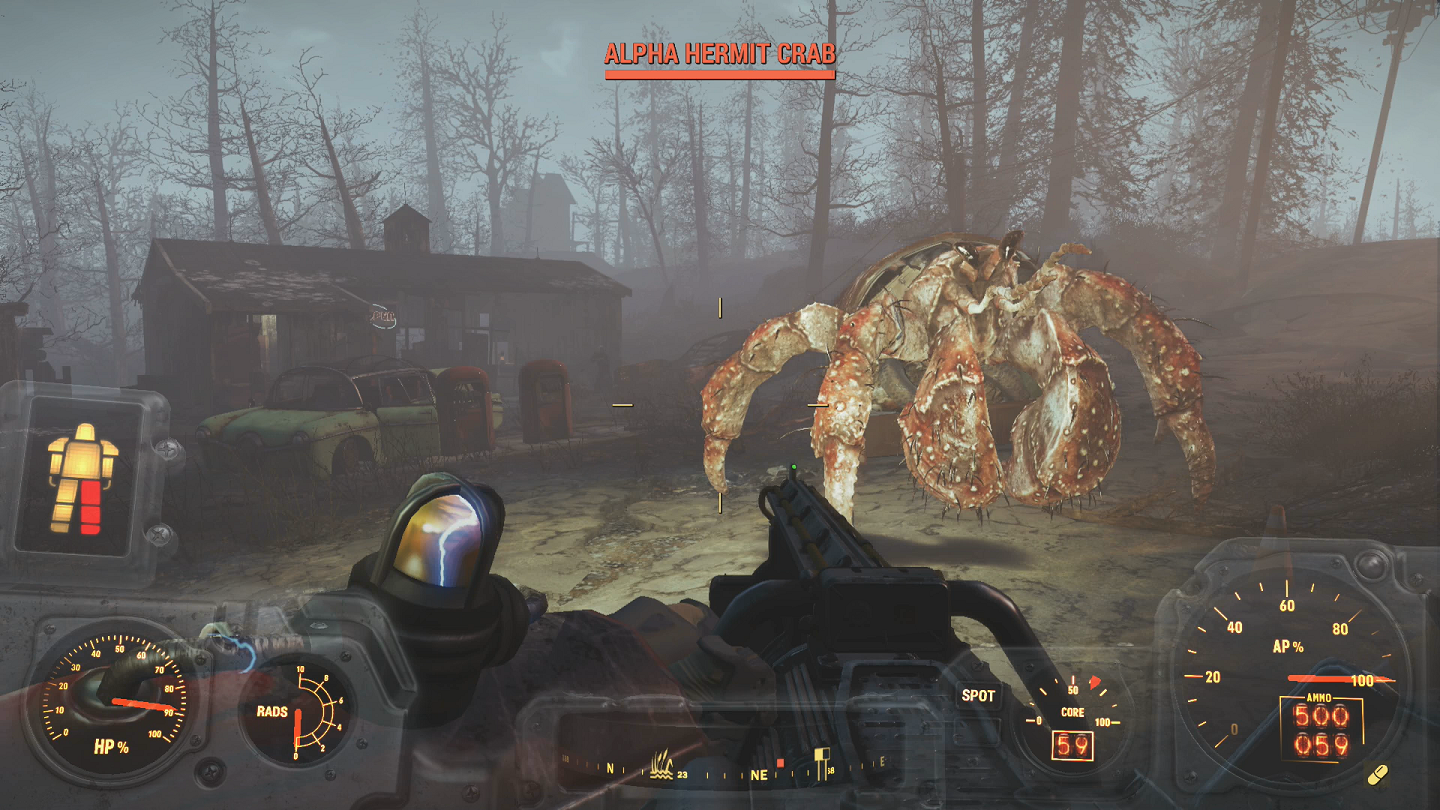 The DLC starts off innocently enough, with a radio beacon from Nick Valentine’s secretary summoning us to Diamond City. Crossing Nick’s desk is a missing person case from far to the northeast of the Commonwealth, where a reclusive fisherman and his family have eked out a living in the waters. The fisherman’s daughter has vanished like a thief in the night, and it’s our job to track her to Far Harbor and find out what happened to her. 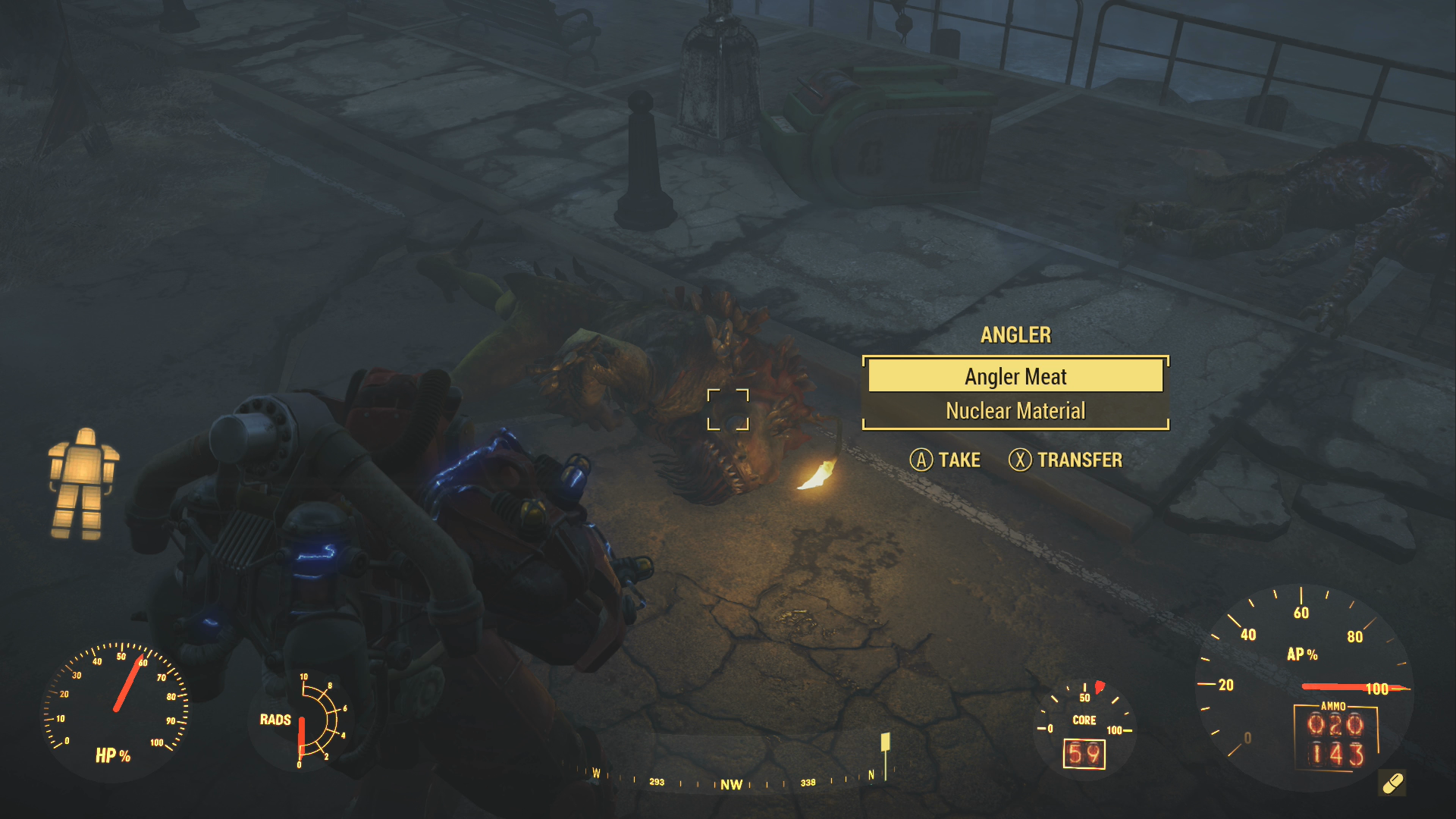 Far Harbor describes both the town and the island, which is on the brink of a civil war between several different factions. Also threatening the delicate balance of power is the fog, which contains heavily mutated fish and sea creatures in addition to the normal wasteland fauna. Bethesda has gone back to the drawing board and returned the focus of the questing to traditional roleplaying over action. Yes, the quests can be completed with violence (mostly), but there are also opportunities for subterfuge and even dialogue. The characters have more mysterious motivations this time around; there’s some gray instead of black and white. Early on in the questline, when I was still looking for the fisherman’s daughter, I met an enclave of escaped synths who were ostensibly peaceful but, like most living beings, value their survival above all else. I was able to use them to my advantage when dealing with other groups on the island after sneaking around their facility and learning all of their secrets without resorting to murder. Other factions in the mist are equally fascinating, and the zealous Children of Atom finally get their chance to shine.

The island itself is an interesting character. The fog that covers everything isn’t quite as deadly as the residents of Far Harbor would have you believe, but it makes for a dismal, gloomy swamp setting not unlike 'Point Lookout'. Creatures hang silently in the trees or hide in the water, waiting for unsuspecting travelers to come near. Radiation storms are frequent and synergize with the fog, creating pockets of low visibility that are conducive to rough, panicked firefights. 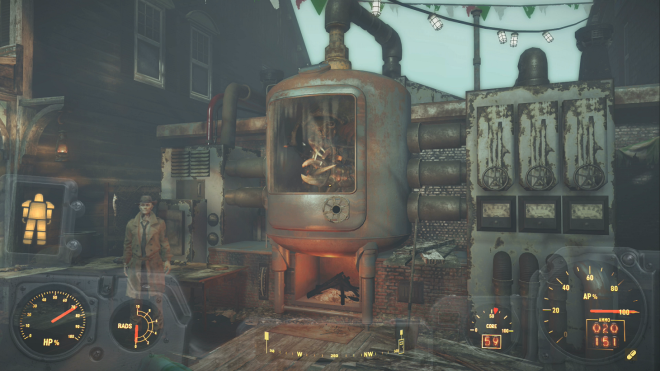 The island looks beautiful on the surface. The fog is gothic and Lovecraftian in its simple, dark madness, and the creatures that live within it are pieces of art. However, it puts a strain on the engine and in places with thick fog the framerate can decline rapidly. There are also problems with fuzzy edges and especially light blooms that can become unwieldy. Many NPCs have been reskinned for a more marine look, like ghouls and raiders. 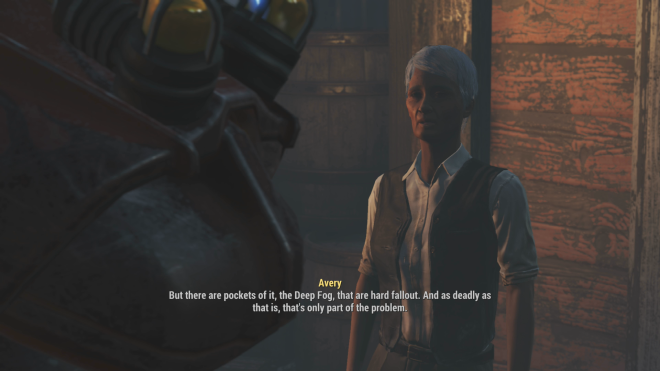 The score and soundtrack remain the same (a pity, as more licensed music from the 30s and 40s would be very welcome). The voice acting is of a very high standard and even the minor characters put in good performances. The fog creatures and new weapons are suitably impressive.

The map is big and full of things to do in typical 'Fallout' style. New creatures are everywhere, from the grotesque anglers and fog crawlers to massive hermit crabs who use trucks for shells. As I often do in open worlds, I ditched the main questline right after my arrival and started exploring. Quests, objectives, loot, and interesting lore came quickly. Some of it is serious, and some of it follows the quirky pulp humor of things like 'Mothership Zeta'. 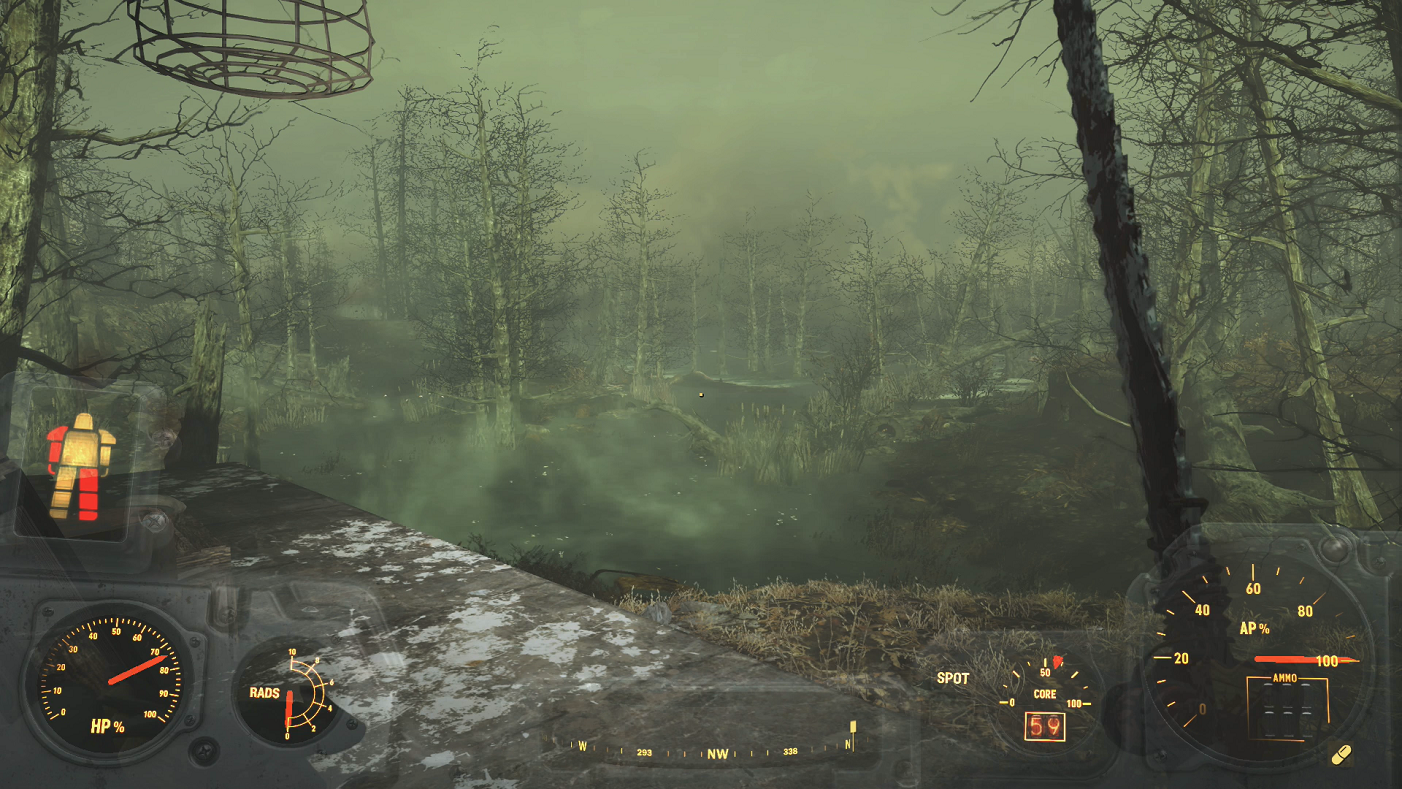 There are a few workshops on the island and they can be used as a base of operations for venturing out into the fog. It's not quite the settlement system of the base game, but it is nice to be able to repair my power armor at Longfellow's shack instead of zoning all the way back to the Commonwealth. 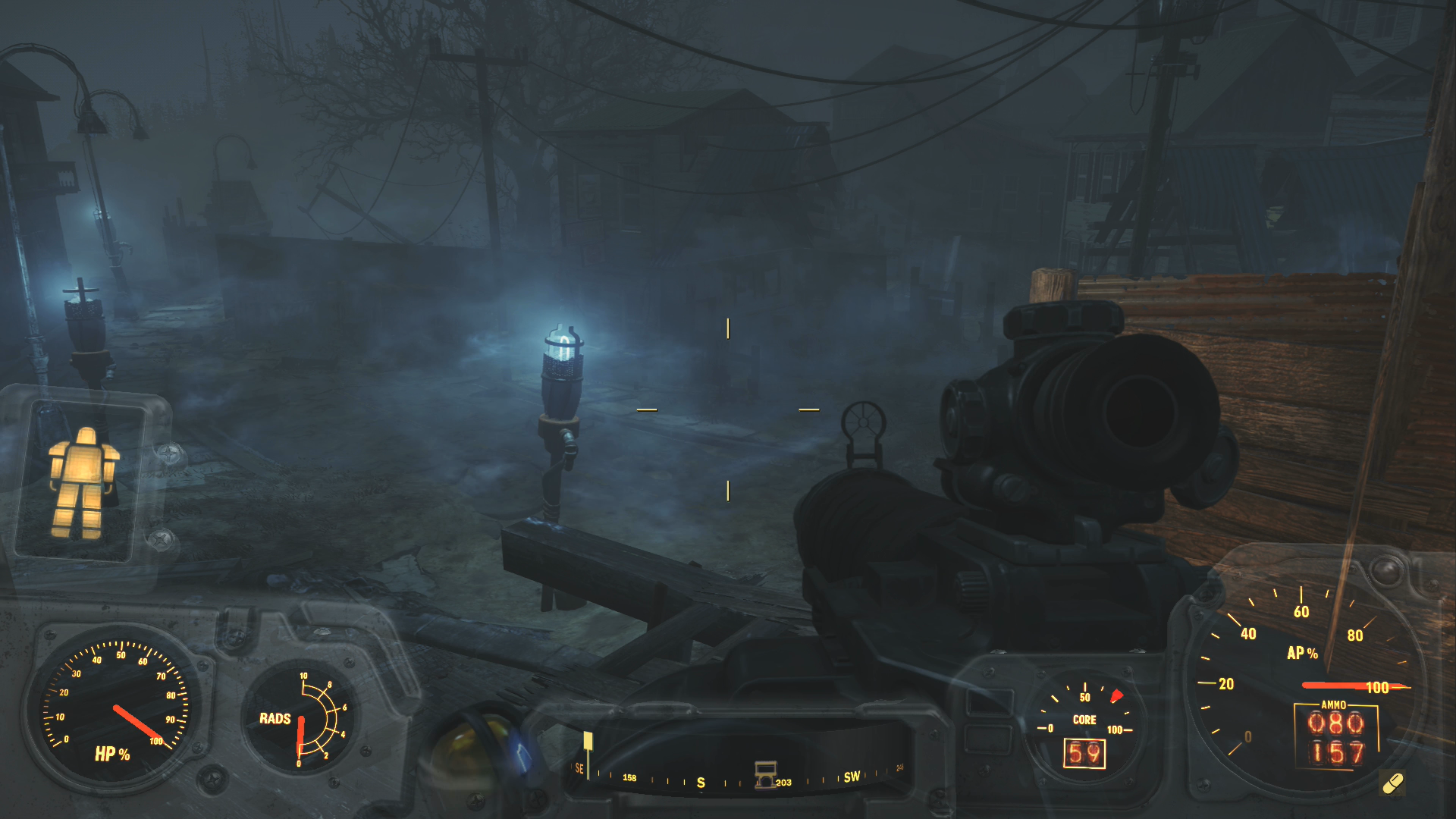 The new content also includes a bunch of weapons, armor, food, and equipment. Notable pieces include the radium rifle, favored by the Children of Atom, and the harpoon gun, the preferred weapon of the Trapper band of raiders. I tend to stick with the power armor and so much of the clothing and apparel doesn’t interest me, but there are several different kinds of randomized loot descriptors that also apply to gear discovered in the Commonwealth. 'Far Harbor' also adds one companion, an ancient boatman named Longfellow. He has his own loyalty perk and can accompany the Sole Survivor back to the Commonwealth at any time. 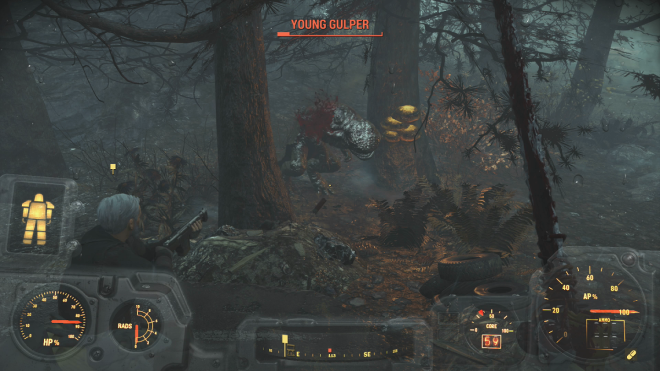 In terms of design, art, and just plain content, 'Far Harbor' is some of the best DLC in Bethesda’s stable. The island and its marine inhabitants gobbled up many hours, and even now I still have much left to explore. I wish the engine could struggle along a bit better, but the Commonwealth is now firmly in my rearview mirror as I investigate every nook and cranny on this godforsaken island.