The Game Itself
2.5 Stars
The Video: Sizing Up the Picture
3.5 Stars
The Audio: Rating the Sound
4 Stars
Replay Factor
4 Stars
Bottom Line
For Fans Only

'One Piece' is the best-selling manga of all time and has been adapted into video game form many times, mostly of the brawler variety. 'One Piece: Burning Blood' is the first game in the series from Spike Chunsoft, whose previous work includes 'Etrian Mystery Dungeon' and 'Danganronpa'.

Being completely uninitiated in the lore of 'One Piece' (or any form of manga or anime, for that matter), my first fight in 'Burning Blood' was a bit of a shock. Heavily stylized, grotesquely deformed characters slap one another mercilessly with explosive, screen-filling attacks while screaming angrily at one another in Japanese. The subtitles are in English but still make no sense, but from what I can gather, a rubbery young man named Luffy is the leader of a band of Straw Hat Pirates and they are looking for treasure, and of course there are all kinds of bad guys trying to stop them. It’s all very exhausting to watch, to be honest. 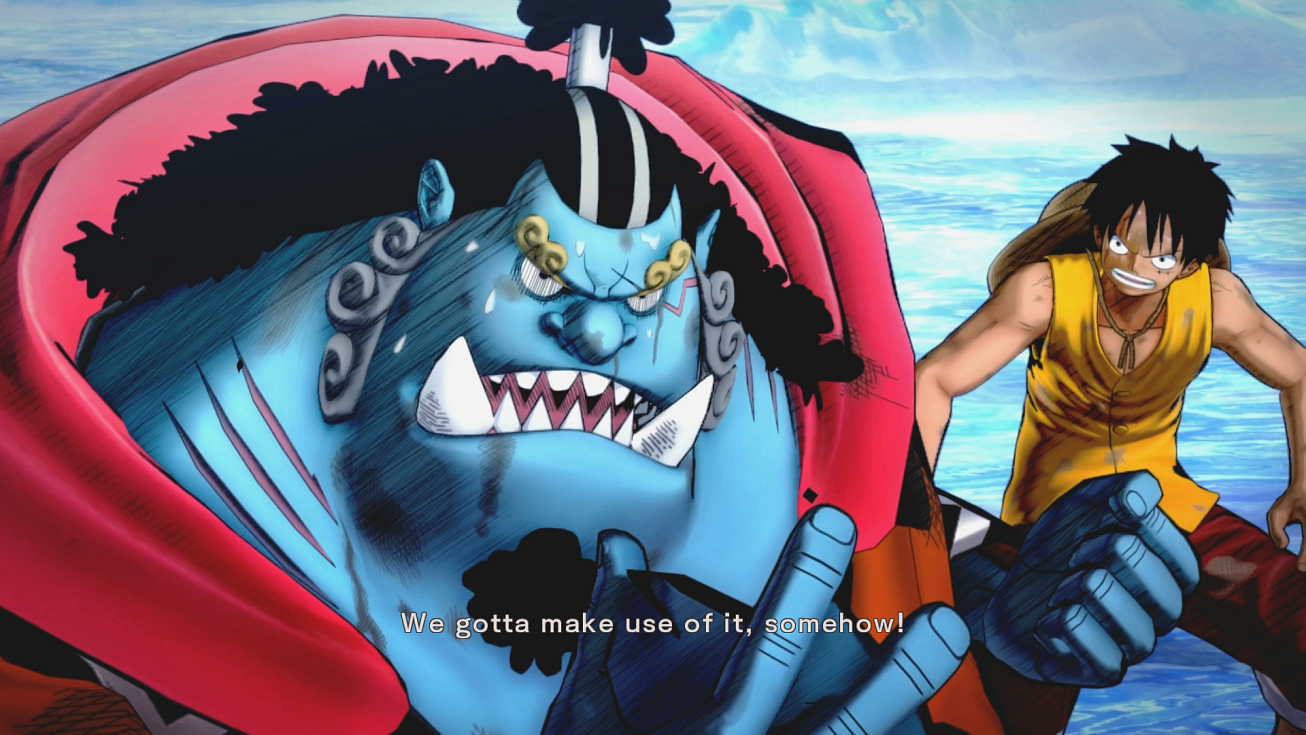 The main avenue of gameplay is the Paramount War, a campaign of sorts with scripted opponents and the occasional objective, like surviving for a set amount of time. It starts out tamely enough, with mechanics gradually being explained throughout each fight. There’s blocking and combos and combo breakers and everything else I'd expect from a modern brawler. After the first story arc is finished, the difficulty ramps up significantly, from challenging to cheap. Blocks are unreliable at best, stun locks are brutal, enemy attacks always receive priority, and unmissable ultimates will instantly knock off half of my health bar.

Button mashing is the way to go in 'Burning Blood', because the combo system is relatively light. A lot of time in each match is devoted not to actually fighting, but watching little cutscenes whenever a character activates a heavy attack. They have a habit of being anticlimactic, because they can miss or simply be interrupted by an opponent. They can also be spammed endlessly. My technique, if it could be called that, consisted mostly of running in circles around an opponent to avoid attacks until I saw an opening for a combo breaker or heavy attack, and then roll the dice. Sometimes it hit, sometimes I would be blasted back across the level and lose a good chunk of my health for the trouble. I wanted to get into close range fistfights like I’m used to in 'Mortal Kombat', but the knockback here is real and ranged attacks are heavily encouraged. 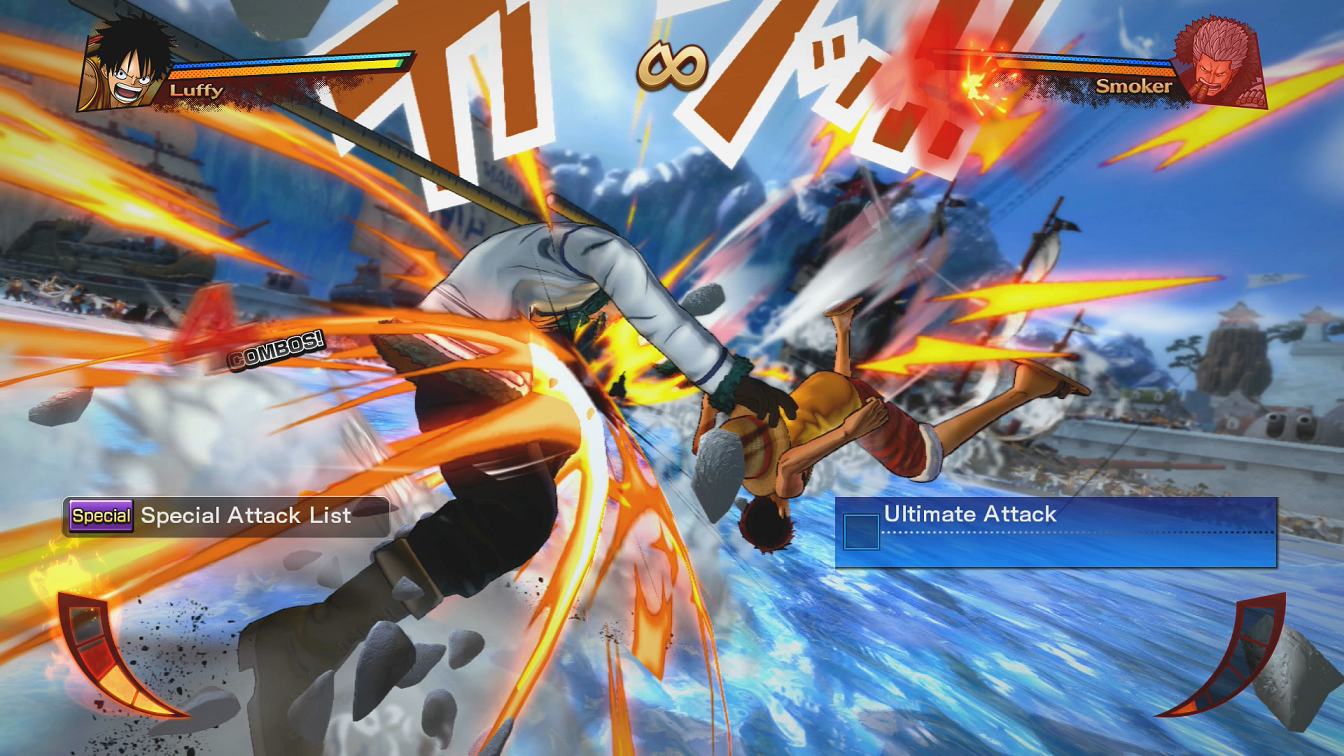 The roster of playable fighters is large at 40-something, and they are assisted by another long list of supporting characters who add passive bonuses or other boosts. Not all of the characters are distinct from one another in the ring, but their inherent animeness gives them interesting attacks and unpredictable movement. Luffy himself is one of my favorites, as his Mister Fantastic-like limbs serve as ranged attacks and make him dangerous at a distance. Chopper, a miniature human/reindeer hybrid who can morph into a massive creature, is another favorite. Each fighter is classed into broad groupings like power, technical, speed, and "tricky". These classifications basically work on a spectrum of speed and power, and juggernauts like Burgess can hit like a truck when they are able to land hits.

As for the story, it is thoroughly impenetrable unless you have some familiarity with 'One Piece' in advance. Nothing is explained to the viewer, even basic concepts like the Grand Line or the devil fruits that give these creatures their weird powers. As an outsider it has little to offer me, but a 'One Piece' fan would surely enjoy its wacky charms. 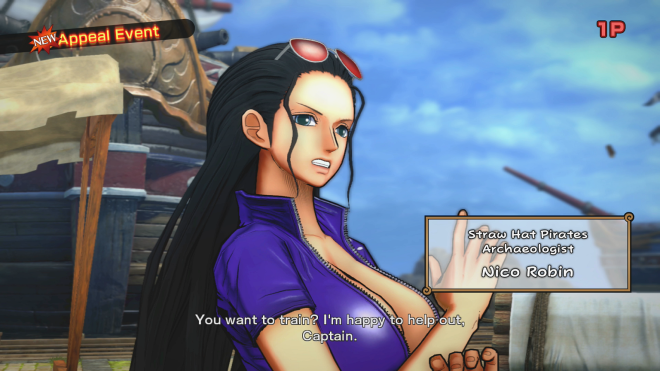 'One Piece: Burning Blood' nails the anime look perfectly, and its artwork hovers somewhere between hand-drawn and cel-shaded. Dramatic explosions and comic-like exclamations punctuate each heavy attack. Little words pop off from the characters when they move or strike, and the screen in general is very busy in a good way. The characters are here in all of their bizarre style, like Sengoku with the seagull perched on his head and Brook the dapper calaca. It doesn’t control as well as it looks - there are hitbox and framerate problems, not to mention the confusing block controls. 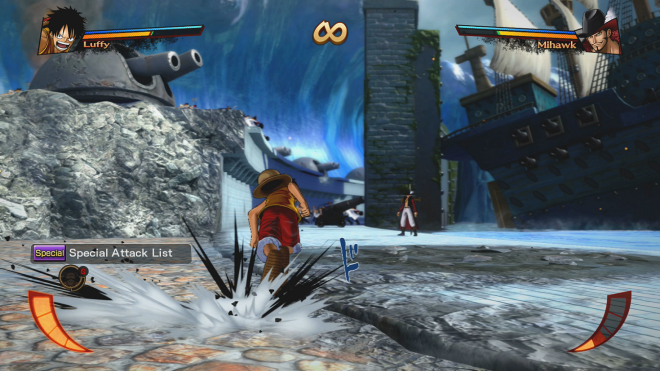 The dialogue is 100% rapidfire Japanese; no English dubbing here, no sir. It adds authenticity but also makes it less accessible. The sound effects are as awesome and nutty as the character models, and the stringy score matches the seafaring theme.

There is a lot to do besides the Paramount War. One-shot battles galore can be found in the Wanted Posters section, where fights have diverse objectives and challenges and also offer currency for purchasing more characters. Anyone can be chosen from the roster, so it can provide a good opportunity for training for the campaign, which usually has premade teams. Limited-time and high-difficulty options round out the bounty options, and there is also multiplayer to be unlocked later. Free Battle puts all of the options in the player’s hands, down to the map select. 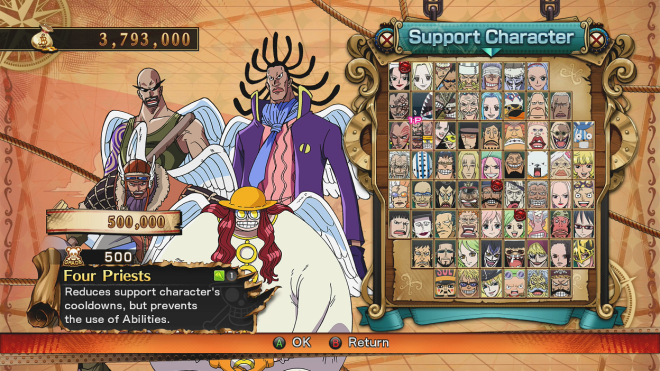 'Burning Blood' is pure fan service through and through, and there’s nothing wrong with that. People who don’t watch/read the source material are going to remain thoroughly confused, but there’s still some enjoyment to be had in its wacky fighting and over-the-top style. If you’re not a manga fan and are looking for a fighter with tight mechanics, accurate hitboxes and a deep bench of combos, best keep looking.