The Game Itself
3 Stars
The Video: Sizing Up the Picture
3.5 Stars
The Audio: Rating the Sound
3.5 Stars
Replay Factor
2 Stars
Bottom Line
For Fans Only

'Dead Island' was released in 2011 by by Polish company Techland (also behind 'Dying Light') and was followed up in 2013 by 'Dead Island: Riptide'. The definitive edition includes these games as well as 'Dead Island: Retro Revenge', a standalone old-school arcade homage from Empty Clip Studios. It doesn’t include 'Escape Dead Island', a decidedly different experience from Fatshark.

When 'Dead Island' was released, zombie games had already passed their prime. That wasn’t stopping developers from making them, far from it - but the zeitgeist had moved on. Techland went ahead and made a decent enough zombie game anyways, a kind of action FPS with MMO sensibilities that did well enough to inspire a middling sequel and then a poor spin-off from another developer. 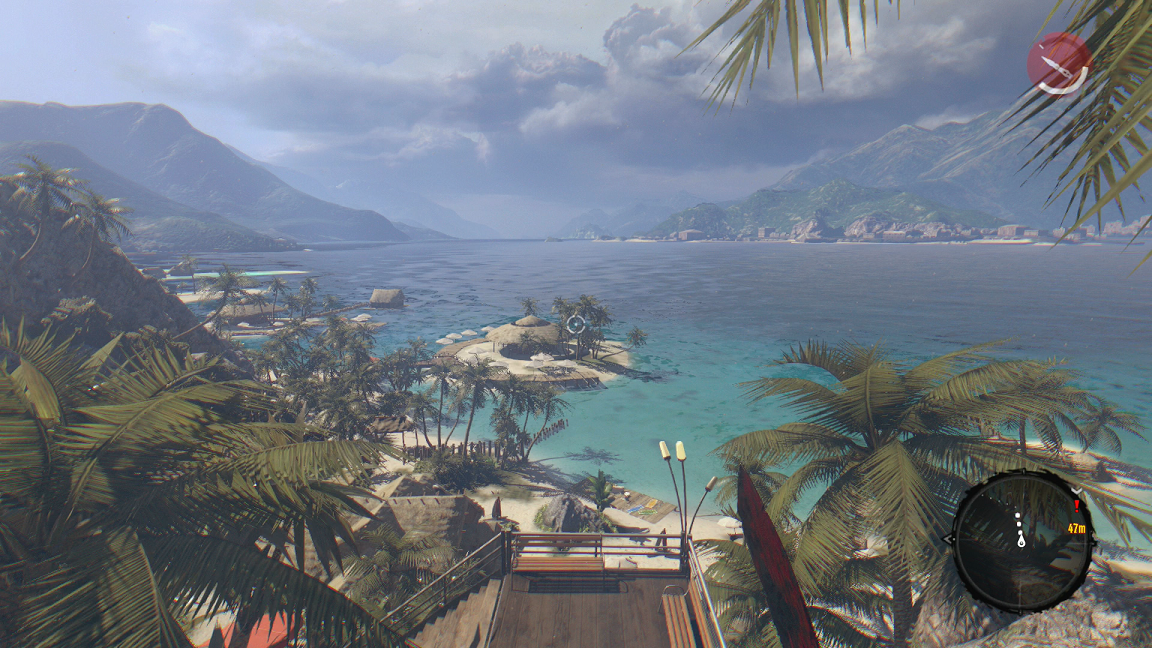 They could be described as shooters I suppose, but the 'Dead Islands' are more like first-person melee games. Guns are loud after all and ammunition can be scarce on a resort island, so these zombies are usually dispatched with crowbars, knives, paddles, and anything else that you can swing at an infected. The infection is much the same as it always is - mysterious, apocalyptic, with a few heroes having immunity and trying to help others as they try to escape. Most of the zombies are garden variety walkers - easy to dispatch one-on-one, but dangerous in groups. Some of them are special snowflakes and can sprint, or have huge health bars or other attacks, a trend popularized in 'Left 4 Dead' and later refined in 'Dying Light'.

Every zombie has a level, and heroes have levels too with skills and such like an RPG. Each hero has a different rage ability that can be activated periodically, like pulling out a pistol with free ammo and shooting indiscriminately for a set period of time (and also alerting anything within earshot). Survivors give quests, almost always of the fetch or kill variety, which award experience, weapon blueprints and such, and these weapons can be crafted at various workbenches. It plays well enough, but in practice this kind of gameplay can become a slog. The fetch tedium could be alleviated by novel combat, but there’s not much of that to be had here. Some of the weapons are kind of cool, but not cool enough to make it a delight to sprint around a tropical paradise and wipe out hordes of undead with shovels and sticks. I punched and kicked people and sometimes shot them, and every kill was nearly identical. 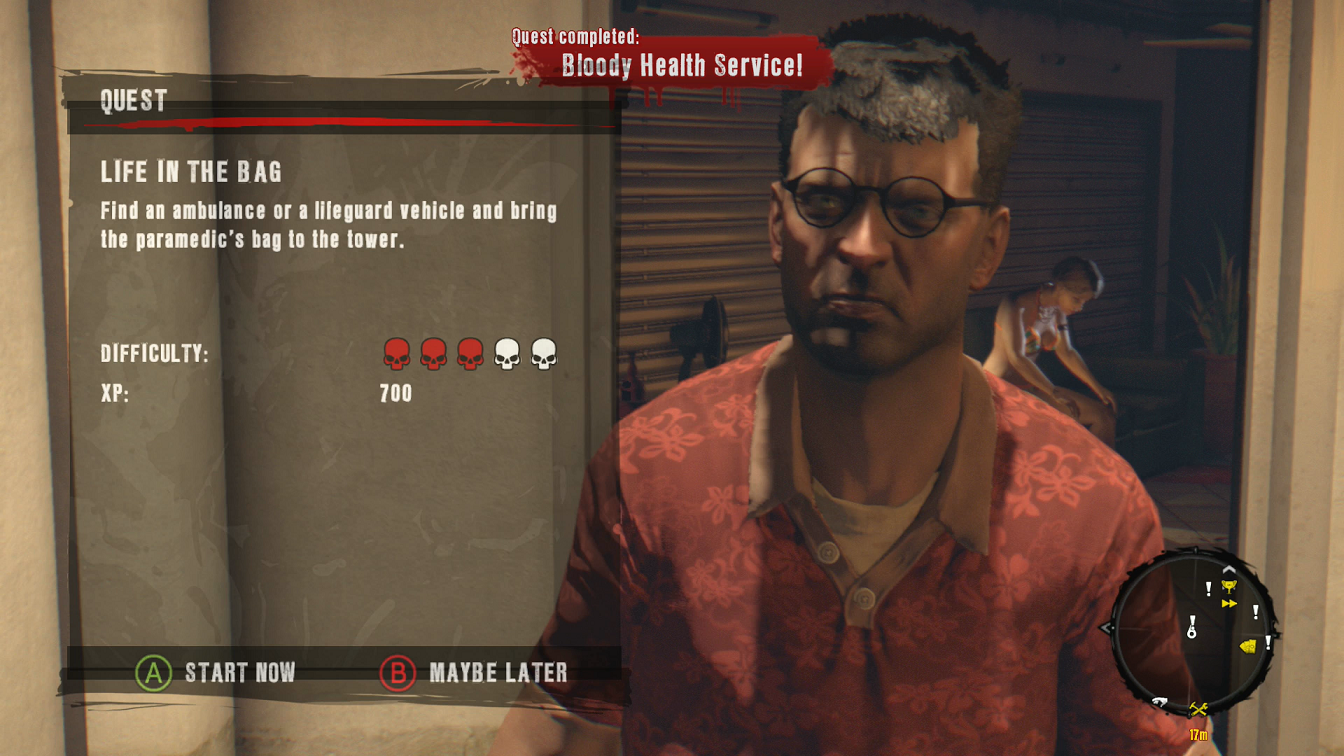 The storyline is equally tepid. I chose the disgraced Australian cop as my hero, but all of them have little in the way of personality, and the same can be said of most of the NPC/questgivers. 'Riptide' sheds more light on the background of the infection, but it’s a slow, dry process and the gameplay that surrounds it is little changed from the original. These survivors in general are pretty meek and lazy, content to send me out on errands all over the island while they sit in their nice air-conditioned offices/bungalows while they await for my timely deliveries of supplies in return for a lame brass knuckles that will break in 10 hits and then be morbidly expensive to repair. Even during the zombie apocalypse, fixing things requires money of course, but luckily more cash can be acquired by digging through corpses. Good thing all of these people were kind enough to stash money in their swimsuits before they turned.

'Riptide' offers little in the way of ingenuity, being a follow-up of a game that was already a thinly veiled mishmash of other genres. If you loved the original then you will love this game for exactly the same reasons, and vice versa. As someone who has only played a 'Dead Island' for review and then promptly forgot about them in the sea of open worlds released every year, I could find few things to entice me to stay and bash more zombies. 'Dying Light' is leaps and bounds ahead of this stuff (no pun intended), and with decent parkour-inspired combat to boot. 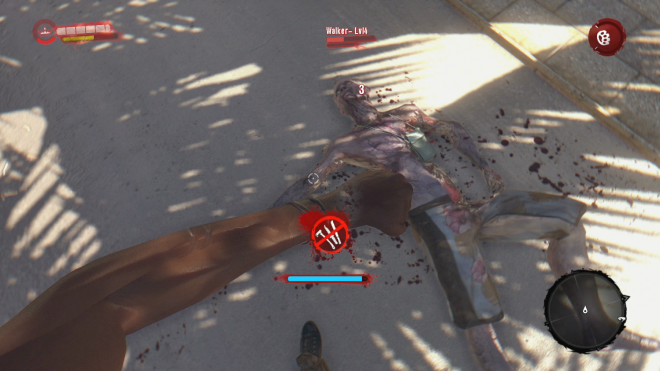 The only good part about this compilation is the video, which has seen significant improvements over the buggy, wishywashy originals. It’s still not amazing, but there is a much higher level of detail in the environment and textures, as well as better lighting. Draw-in is a minor issue, and the hitboxes are a major issue (enemies being hit when I should have missed, being missed when I should have hit, and so on). 'Retro Revenge' is uninspired pixel fare from yore with no modern flourishes. 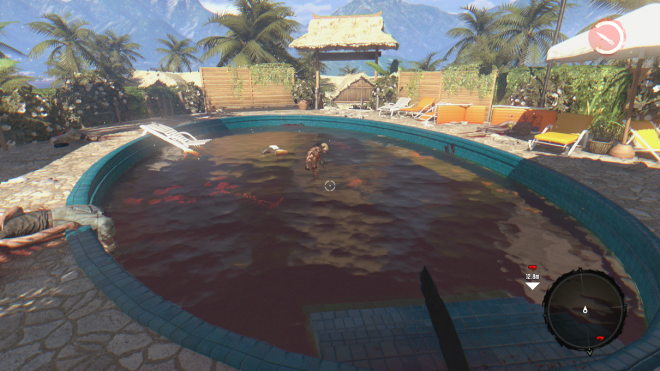 'Dead Island' sounds well enough with zombies that are actually creepy as opposed to the tame depiction in a lot of games and movies. Growling is loud, even when they are far away, making me constantly swing around in paranoia and lash out at thin air to preemptively strike any biters, although they could be fifty yards away. The games are light on music and dialogue, but the voice cast put in some decent performances that help with immersion (somewhat).

Both main games are open world but there’s not enough incentive for me to be creeping into bungalows and surfboard shops. I might find a few bucks in there or a flimsy weapon, but not much in the way of lore or curiosities - not quite the engrossing experience of a 'Fallout' or 'GTA'. There’s always the odd chance of finding another survivor, but he had a 50/50 chance of offering me yet another flimsy weapon or a fetch quest, both of which I had in spades. There is a co-op mode for both games which make it more fun, but with the exception of the bundled DLC, no new content has been added.

'Dead Island: Retro Revenge' is the new kid on the block in this compilation, but it’s the kind of weird kid that’s going to have a hard time making friends. It’s simple, shallow even and highly repetitive, but without the retro nostalgia of certain classics of that era. It’s a third-person rails runner where this guy goes from left to right across the screen, sometimes changing lanes and sometimes hitting zombies with his fists. He can occasionally pull out a weedwhacker or explosive magic to pummel foes, and that’s about the extent of the gameplay. It’s like Empty Clip decided to take all of the bad stuff from the arcade era and cram it into one generic beat-em-up, then slap a coat of zombies on it. It’s not worth playing. 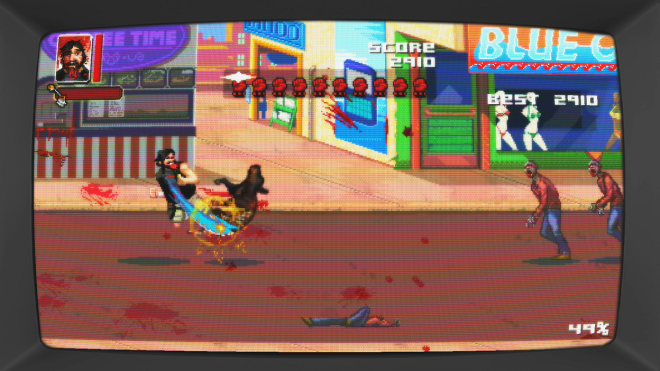 Deep Silver was happy to jump on the definitive edition bandwagon, but there are games far more deserving for this treatment. Real strides have been made in the video department. Otherwise, there’s not much else from the 'Dead Island: Definitive Collection' to recommend here - two ho-hum games that are aging quickly despite their youth, and a new retro title that adds very little to the equation.