Monster Fatal1ty FXM200 gaming headset reviewed using a variety of devices, but mainly the PS4 via a DualShock4 and the Xbox One via a Xbox Elite Wireless Controller.

Into the crowded and competitive field of gaming headsets comes Monster, but the brand most known for their cables isn't going it alone, as the headsets are being developed and produced under a partnership with Fatal1ty Gaming Gear. That's right, Johnathan 'Fatal1ty' Wendel, who has been involved in making gaming headsets and other kit for over a decade has taken his talents to Monster.

The first two headsets to come out of this Fatal1ty by Monster partnership are the FXM100 and FXM200, which, based off of their respective feature sets and price points, are targeting one of the most competitive segments for gaming headsets, the sub $100 category.

While the two headsets have many similarities, the focus of this review is on the larger and more expensive FXM200. The FXM200 is a larger, noise-isolating, ultra-light passive headset. The FXM200 features an interesting two-mic design along with a fixed, flat cable and inline controls.

I was very dubious of Monster when they announced their intention to enter the gaming headset arena. Roping in Fatal1ty is all well and good, but I have seen several companies take their first stabs at making a gaming headset and fall right on their faces. The needs of users who think there's nothing abnormal about spending hours with a headset and mic under less than ideal conditions in their leisure time can mean that a shortchange in comfort, durability, audio quality, mic quality, and everything in-between will be found. Such a flaw cannot be offset by extreme styling, buzzwords, or partnerships. 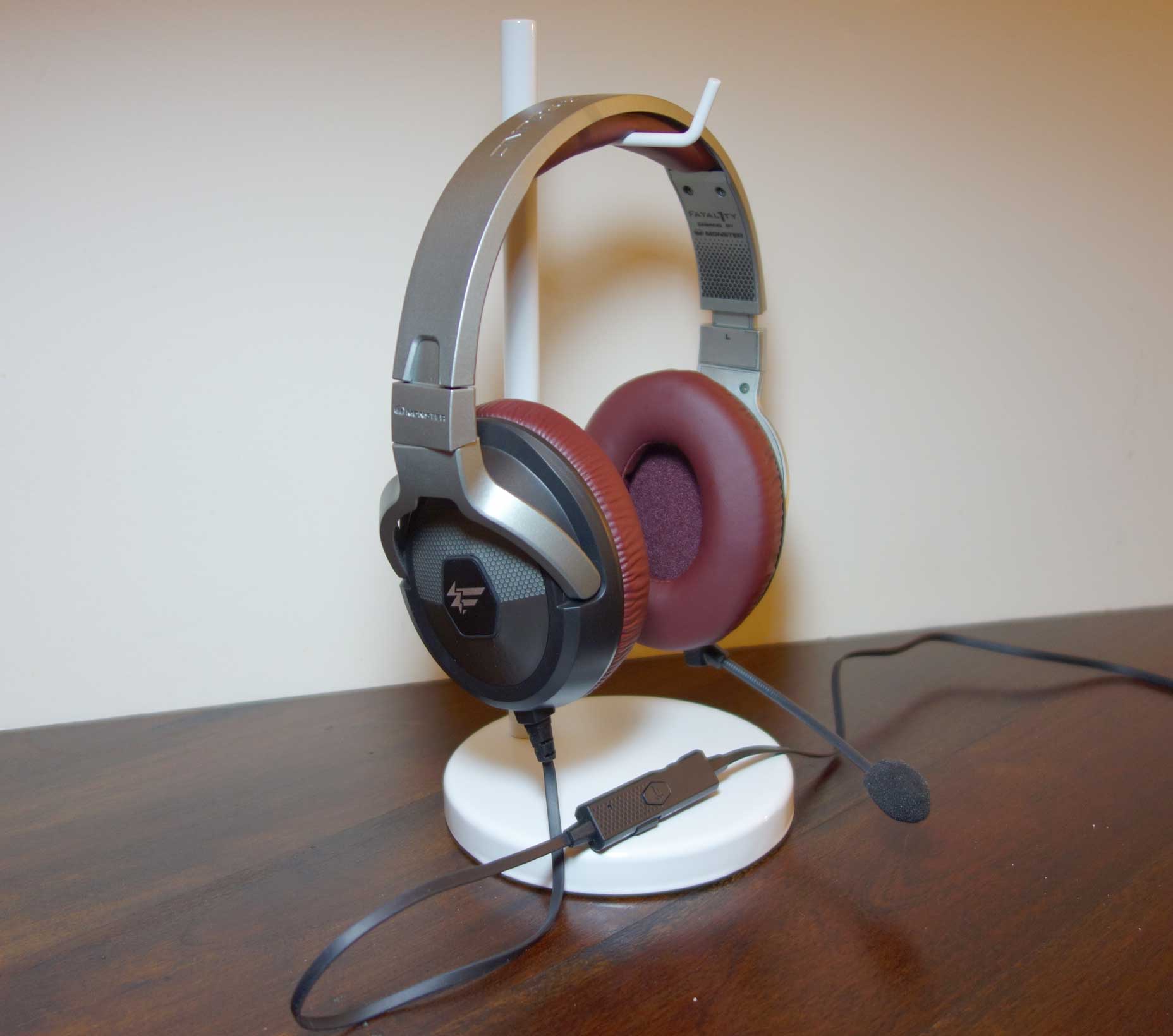 Cutting to the chase, and Monster has a surprisingly good product on their hands. While it can be tricky to talk price point as the difference between list and what a headset is going for vary wildly post-release, the FXM200 was, in all likelihood, meant to be a bit pricier than the $99.99 MSRP. More important, however, unlike most first-generation efforts, the FXM200 effectively checks several boxes, including being comfortable and sounding good.

Chief among the FXM200's attributes is being ultra-light. With the boom mic attached, the headset still checks in under 8 ounces, and that includes the attached dangle mic and inline control section. Compare that with the HyperX Cloud II, which with the mic but without its control pod is still over 11 ounces or the ASTRO A40, which without controls or MixAmp is close to 13 ounces. The FXM200's headband also has a welcome flexibility to it. My review model had zero need for break-in, which is rare.

The ear cups are a larger on-ear design, which I was pleased to find works well for my medium to large ears and head. The only comfort issues I had with the headset involved the dangle mic/controls, as the weight can sometimes pull the right ear cup (say if I was walking around and not using the built-in clip). A seated couch position seems best for me since I don't normally like to use such clips. The other issue I had is common for leatherette ear cups, and that is they can get a little stifling over time in warmer conditions. My ears can put out a lot of heat, and occasionally reaching up and venting each ear is a generally good idea. 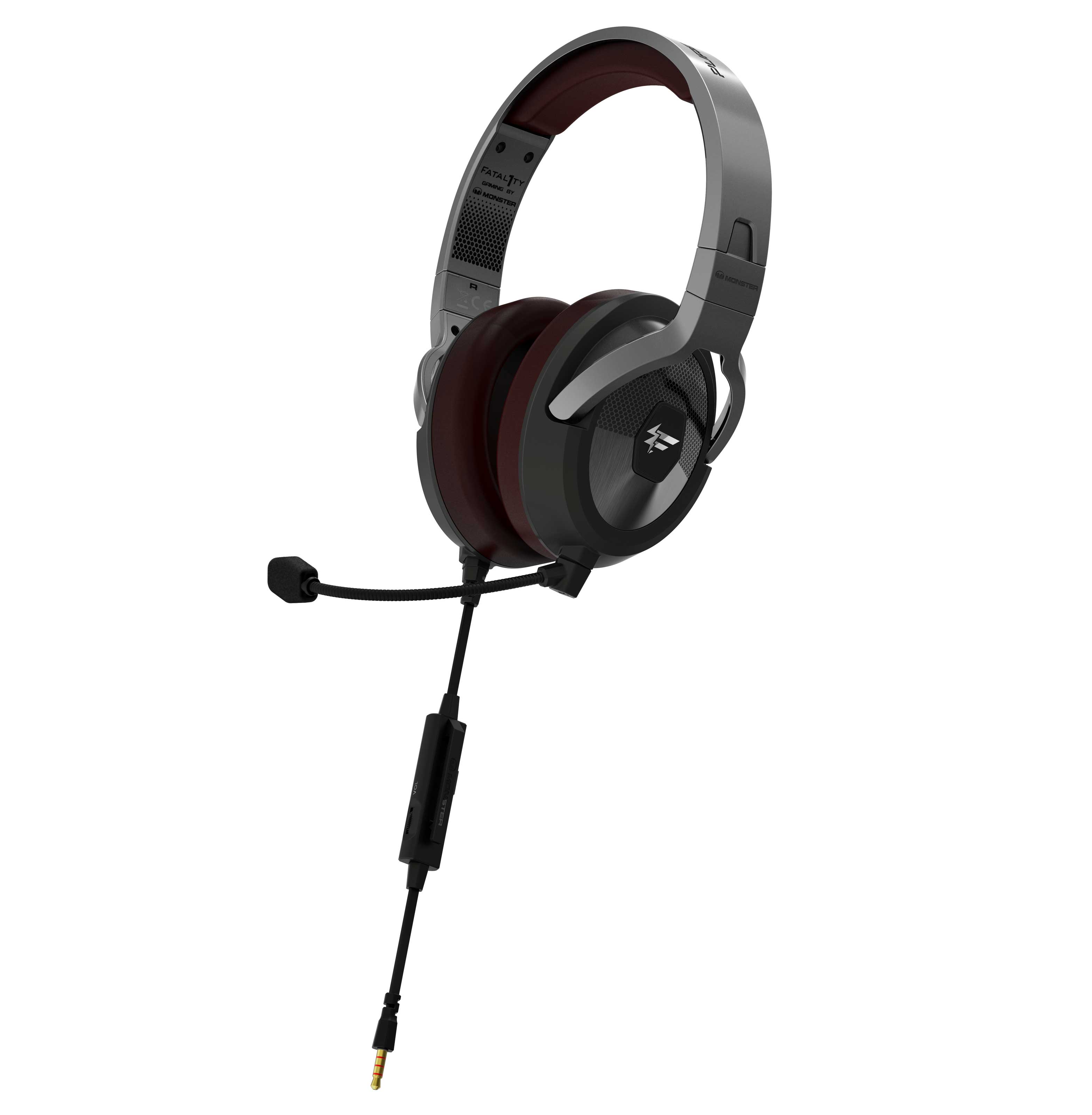 My first turn with the FXM200 was with a somewhat unlikely mate, the Nintendo DS. I was playing some 'Chrono Trigger,' and the simple DS lacks Bluetooth or optical or anything fancier than 3.5mm stereo. Any good 3.5mm connected headset should be able to handle a DS, and indeed the FXM200 can, even while I'm playing afterhours in the dark, sitting up in bed.

Before getting to the big kahuna consoles, it's important to know that the FXM200 got along well with my LG G4. Some care has been taken with the headset to ensure that it can still play music in a recognizable way. The headset does something to the low end to punch it up a bit and in turn muddle the bass, but this is much tamer than most bass-heavy headsets. It won't please purists, but listeners who favor a little extra over flat may enjoy it. For me, the music performance is mainly pleasing. Listening to something like Jake Bugg's 'What Doesn't Kill You' both on the phone and on a headphone amp, and it's clear that the FXM200 is an efficient design. It does well with lower power devices. The flip side of that is that it doesn't scale as well. Many gaming headsets have bigger drivers and wider soundstages, but also require more power.

On the Xbox One, I went with one of my current mainstays for headsets, 'Star Wars Battlefront.' The FXM200 connects simply via the 3.5mm audio jack on the Xbox Elite controller, and in 'Battlefront' the in-game performance is quite enjoyable. The tighter stereo channels make pinpointing sounds via L/R child's play, which is a useful way to play. 'Battlefront' isn't the most crowded audio experience, but when player chat is added in, it's dense enough. As ever, 'Battlefront' seduces with its combination of DICE sound design and 'Star Wars' heritage. The only real complaint with the FXM200 worth noting is that it can easily pick up signal drops. These drops are all-too frequent with controller-based audio, but some headsets pick this up better than others.

Hopping onto the PS4, I briefly indulged into listening to the piano that fills out the 'I Am Setsuna' soundtrack. It's something I recommend to anyone looking for some serene moments, and the FXM200 delivered without a hitch.

'Metal Gear Solid V' is another mainstay of mine, and for a change of pace, I fired up 'Ground Zeroes.' Taking Big Boss into the side mission with two Marine targets, the FXM200 did everything asked. Crawling between the guard shack and fence near the southern most prisoner holding area, I felt confident that I was in the sweet spot in-between the patrols. And that's when I heard the approaching sound of a Jeep. So much for looking at the iDroid as I had to scramble away. For sneaking types like myself, 'MGSV' has a built-in difficulty modifier, the cassette player. Listening to Skull Face drone on about his pathetic life makes it way tougher to hear the opposition. Add in some party chat and the challenge gets hiked up even more. This wasn't a problem for FXM200, though it's certainly not how I would recommend the game be played.

Like on the Xbox One, the FXM200 was quite sensitive to picking up controller-based audio drops on the PS4. Again, this is just how the controller audio works, controller input is the priority.

The FXM200 has an interesting hybrid mic design that is new to me. There is a detachable boom mic on the left ear cup, opposite the fixed cable, and there is a mic off/on switch on the inline control pod. Like many headsets, the FXM200 also has a dangle mic, but it's built into the inline controls. The inline mic also obeys the mic off/on switch, so in effect, the headset always has at least one mic at all times. When the boom mic is connected, it takes over. Otherwise, the dangle mic hooked up, so it's good to have the mic switch set to off unless engaged in chat.

For my review unit, there is just the headset and the removable boom mic as far as pieces go. If you are wondering why I'm going on about the two mic design, it's because usually gaming headsets require the user to keep track of both the boom mic and the dangle mic mobile piece. In comparison this is much simpler and has the added bonus of an all-inclusive mic mute.

The boom mic is not large and is shorter than the kind that extend all the way in front of the user's mouth. Even so, I was impressed by the pick-up. I typically hate short mics, but this one works, and it works without much fussing over position. I did have to set the PS4's mic sensitivity level way low on the slider.

The dangle mic is, in contrast, pretty lousy. As I mentioned earlier, it is meant to be clipped higher than where it hangs naturally. Clipping it on a t-shirt collar seems to be the right spot, and this also keeps the inline controls from turning the mic in while walking. It works well for calls, but the boom mic works so much better. 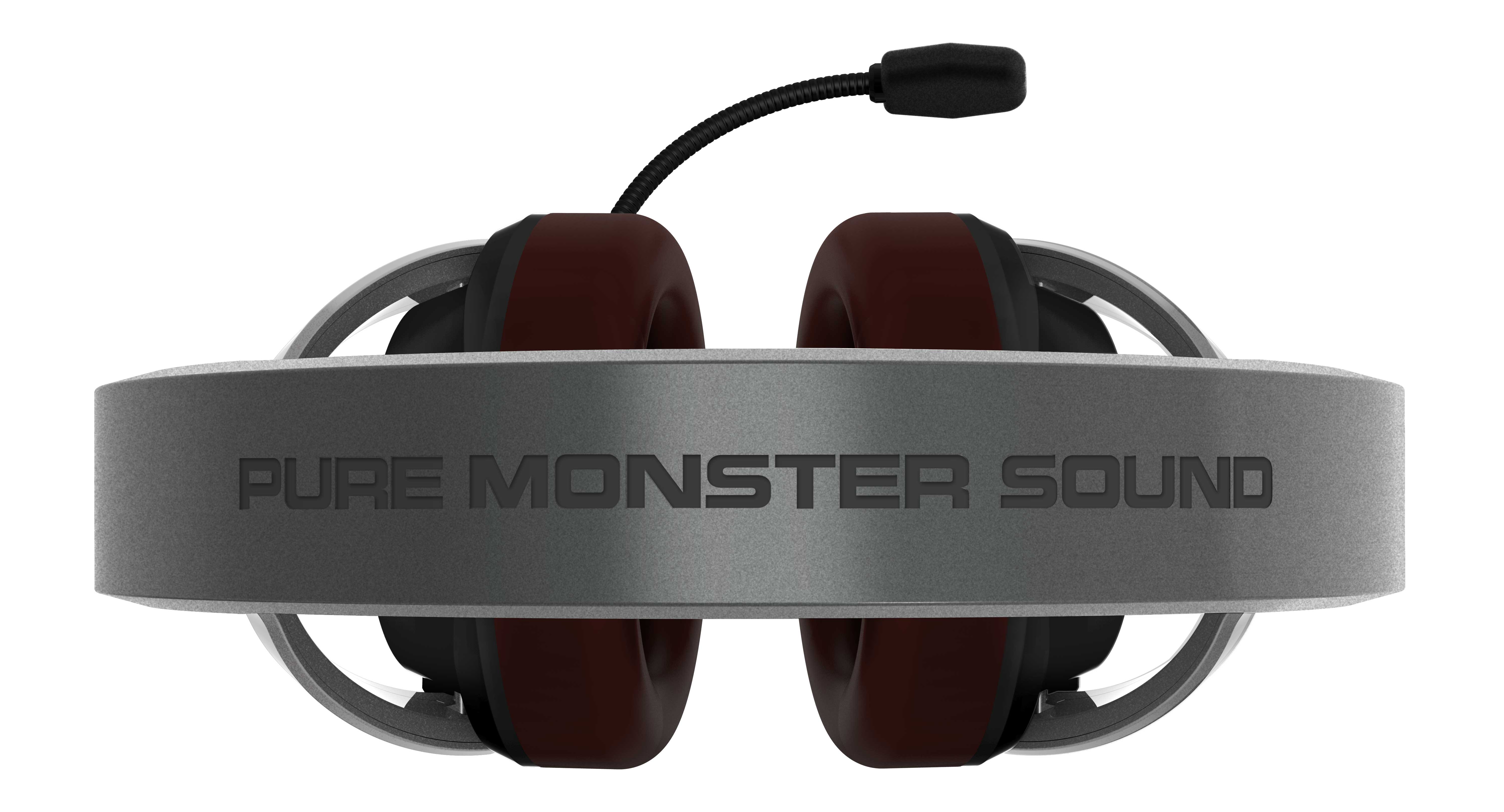 My review unit included the headset and boom mic only, but I've been told that future runs of the headset will also include a Y-adapter for PC soundcards that split mic and audio signals into separate connectors. I hadn't really been surprised by the omission, but it ought to be a welcome bonus if it's made well.

The cord on the FXM200 is fixed, which is a bit of a concern for durability. That the cable is flat all the way through elicits a neutral response for me. The male 3.5mm connector is small and svelte, so it fits into my phone through the case easily. The connector, or at least the handle part of it, is very short. Too short for my liking, and another half inch or so would remove the temptation to pull the cord instead of the connector. The one button control (for mobile use) works great and has a nice click to it. The inline volume control, an essential, is does its job in an exact manner. It stays in place and is easy to reach but not to bump.

I was surprised to find that the FXM200, though sporting some accommodating swivel in the ear cups, does not fold flat (or even come close). Lacking this, the headset is not especially portable. That is, I'm not tempted to throw it in a backpack. A hard case is likely called for here.

It's hard to nail down a durability expectation for this headset. The light, flexible and comfortable characteristics make me wish I could see this after a year of daily desk duty, which I consider breaking work for most headsets.

The styling of the FXM200 is pretty slick. There is a very deep red used for the padding, which goes well with the black and metallic gray plastic. Considering its size and function, weight conservation must have been at a near maximum. The Monster logos are easy to miss from any distance, and even the larger reflective Fatal1ty logos can be considered restrained. 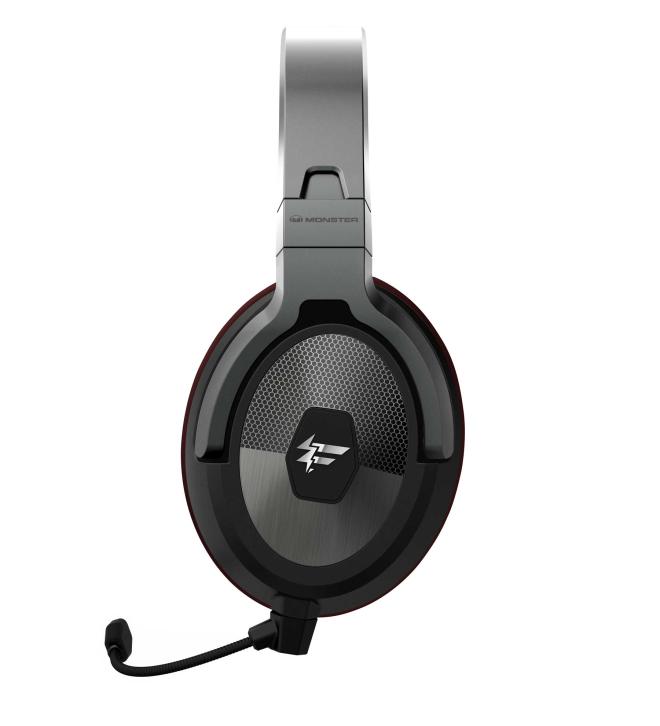 It could have been a disaster, but Monster has produced a stylish, no nonsense headset that pairs well with the Ps4 and Xbox One controllers. The efficient drivers, extremely light and flexible design, and dual mic implementation make the FXM200 a strong entry in a competitive segment. If the FXM200 is what we can expect from Fatal1ty by Monster, then I look forward to future designs.