Ever since 'Zen Pinball 2' released in 2012, developer Zen Studios has supported their video pinball game with dozens of new tables. Most of these have been based upon licensed properties such as 'Star Wars' and 'South Park,' but the most prominent license they've used is Marvel. Over 20 pinball tables have been released bearing the likenesses of famous Marvel comic book characters, and now two more arrive in the form of the 'Marvel's Women of Power' DLC. The two tables focus on female superheroes including Black Widow, Ms. Marvel and Squirrel Girl.

I've been a long-time fan of 'Zen Pinball 2,' so I always get excited when new tables end up releasing. Most of the time, I'm familiar with the tables as they focus on popular characters from comic books and movies. That can't really be said for the latest pair of tables to release, which focus on characters such as Ms. Marvel, Spider-Gwen, and Nico Minoru. Granted, I don't follow comic books nearly as closely as I used to, but these aren't exactly the biggest names on Marvel's roster of characters.

Rather than be disappointed by the usage of more obscure characters, I was actually thrilled. There are already tables focusing on major characters, so why not spotlight some lesser known ones? One thing that Zen Studios has always excelled at was making sure that personality was able to shine in their pinball tables, and that's no exception. Not only was I able to get a feel for Ms. Marvel's quirky personality, I'm now excited to read some stories involving her. 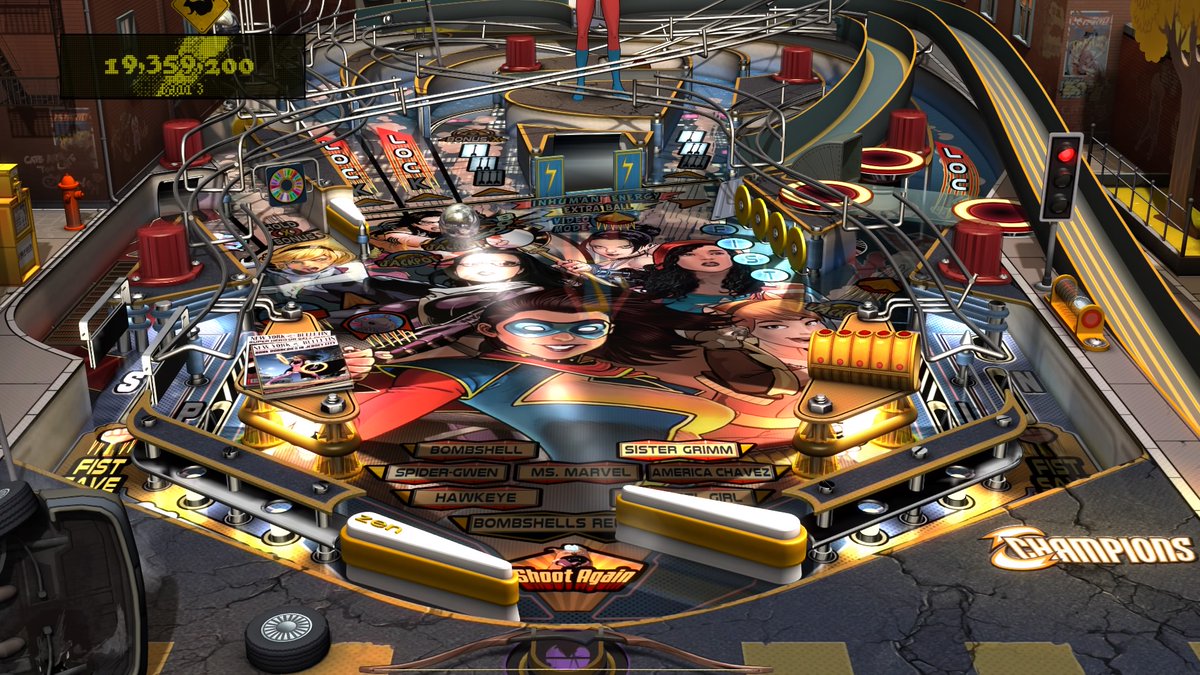 The 'Marvel's Women of Power' pack ends up featuring two tables: 'Champions' and 'A-Force.' The 'Champions' table, despite being named after the teenage superhero group of the same name, focuses on Ms. Marvel taking a summer job at a coffee shop (where things inevitably go wrong). Meanwhile, the 'A-Force' table finds Black Widow and Madame Masque teaming up after the duo are transported to an alternate reality. Both are fun premises for pinball tables, and were easy for me to grasp despite not being up to date with Marvel's current continuity.

Out of the two tables, I spent more of my time with 'Champions.' What I really enjoy about the table is that it has a very straightforward goal: capture Bombshell, who has stolen all of the coffee shop's profits for the day.  All of the table's different goals find Ms. Marvel getting help from various other heroines (like Squirrel Girl and Hawkeye), as they each attempt to bring Bombshell to justice. These all take place in pretty entertaining ways as Spider-Gwen captures Bombshell in webbing, and Squirrel Girl unleashes her army of squirrels after her (which takes the form of a multiball). Each of these fights end in a really nerve-wracking scene where I had to chase the supervillain by hitting the ball into specific areas. It really put my skills to the test, and I was left pretty disappointed when I would get so far only to mess it up at the final area, 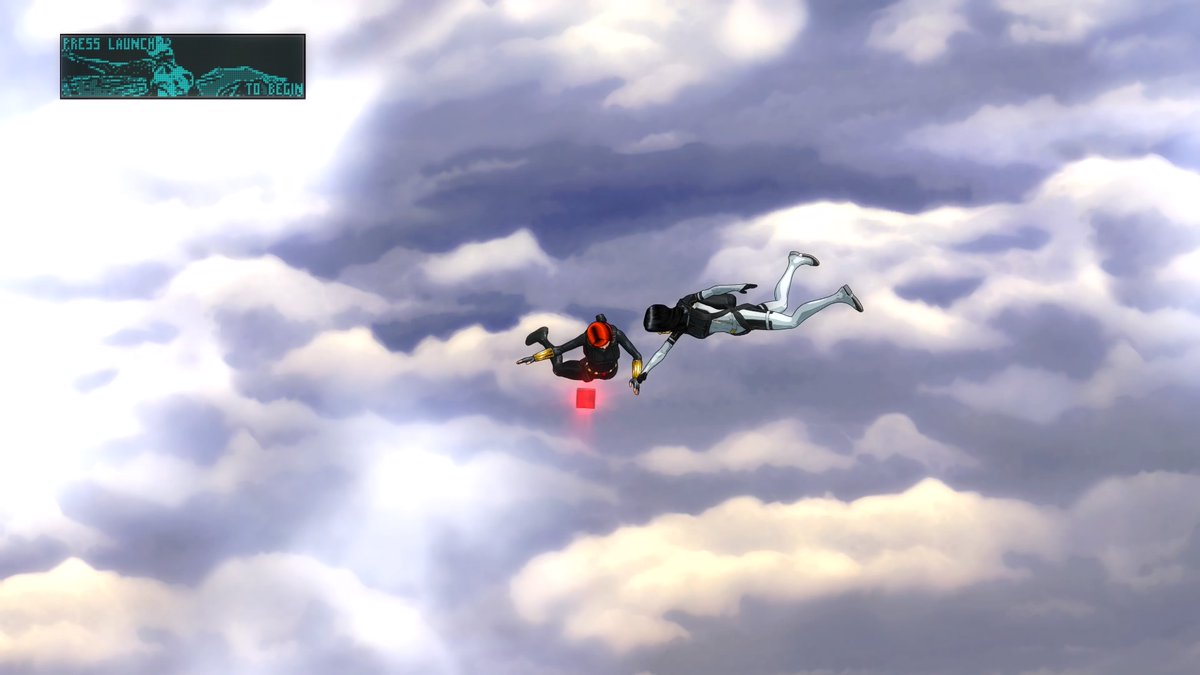 The table itself is filled with multiple ramps, and it can actually be pretty difficult to navigate at first. I lost track of how many times I sent a ball up a ramp only for it to make it half-way up and roll back down. Speed is definitely the key to a successful run, and it makes ramp combinations feel all the more satisfying when I was able to string them together. Overall, it's a really breezy, enjoyable table. It's also a pretty high scoring affair, as my average run ended up with over 50 million points, which is always satisfying to see.

'Champions' also features a pretty fun mini-game that takes place on the pinball machine's dot matrix display that stars Nico Minoru (who appears to be a sorceress). In this mode, which is triggered by hitting the table's sinkhole, I had to collect magic orbs that would fly around the screen by using the two triggers to steer and could accelerate by pressing the cross button. It's a solid addition, although Zen Studios has done more elaborate mini-games in the past (such as a side-scrolling shooter in the 'Family Guy' table). 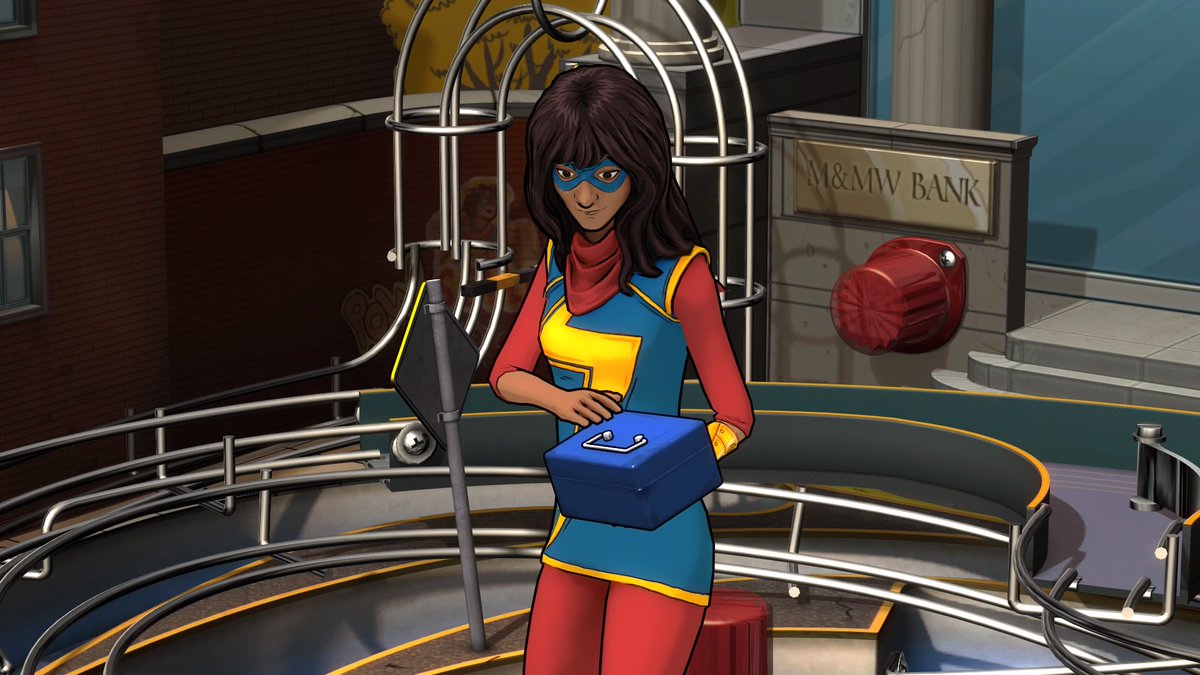 While 'Champions' is more about speed, 'A-Force' is all about precision shooting. The ramps are few and far between here, so I really had to think about where I was sending the ball in order to find any success. The table also features a gigantic head in the middle of the playfield, which belongs to the titanium man Boris Bullski. A battle can erupt against him, where players have to attack the back of his rotating cranium in order to defeat him. I really enjoyed having a superhero table essentially let me take on a mini-boss, and definitely feel like Zen Studios can go down this route more in the future.

The table also takes advantage of it taking place in an alternate reality by having the Soviet version of Black Widow appear to investigate. This starts an encounter where I had to dodge bullets by hitting the right-hand lanes, while shooting her by using the left-hand lanes. It's pretty trippy to see two versions of the same character fighting, and I'm glad the action goes down in such a fun way.

Ultimately, both tables on offer are really solid tables, even if neither really stands out among the 50+ tables that Zen Studios has released for 'Zen Pinball 2.' Both have clear set goals that give a structure to the table, cameos from plenty of Marvel characters, and are just a joy to play. It's more of the same from Zen Studios at this point, but when the quality is this high, it's hard to complain. 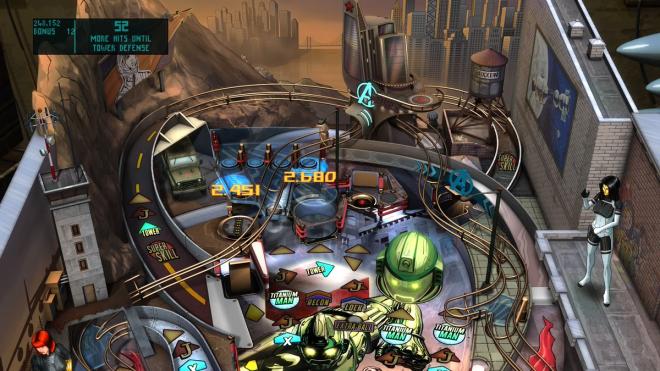 While I don't find either table to be particularly impressive from a visual standpoint, both do more than enough to get the job done. They share a similar cartoon art style that is rather fitting considering the characters' comic roots. As expected, each level is filled with references to the characters and in the 'Champions' table I managed to spot a copy of a fictional newspaper, the New York Bulletin, questioning whether or not Ms. Marvel is a "superhero or sell out?" This sort of attention to detail is phenomenal, and it's these small things that really make each table feel special. 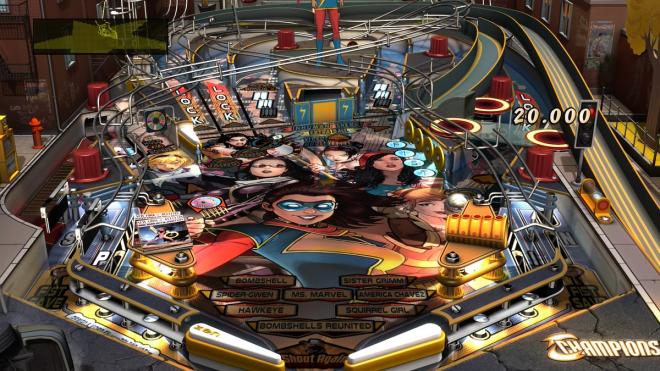 The sound design in 'Zen Pinball 2' continues to be excellent. I constantly heard different sound effects due to hitting bumpers and going through lanes, and that type of aural feedback is highly satisfying. The only thing that really feels like a step down is that none of the characters really have memorable voice acting (which is a far cry from something like the 'South Park' table), nor do they deliver any great lines. Still, some enjoyable, if a tad bit generic, superhero theme music plays on both tables, and they add to the overall experience.

'Zen Pinball 2' is all about getting high scores, and that's exactly the case with the 'Marvel's Women of Power' tables. Since I had a good time playing each of the tables, this will be a game that I continually will boot up and play a few rounds. All of the online leaderboard hooks are present, so it's very easy to spot the scores of friends (or strangers) and then spend 20 minutes trying to best them. This level of presentation and polish is exactly why Zen Studios has found success. It's fun to play pinball, and they've put it in such a great package that it's difficult for me not to come back to. 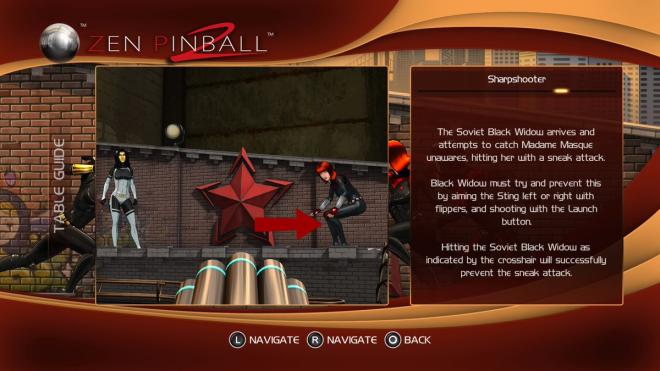 'Marvel's Women of Power' is yet another solid add-on for 'Zen Pinball 2.' Clearly Zen Studios knows how to produce great pinball tables, and it's a pleasant surprise to see lesser characters from the Marvel universe receive the spotlight. It's not the best DLC, as 'Aliens Pinball' and other tables have topped it by being more inventive, but it's still worth picking up if you're a comic book fan or are just looking for some new high scores to beat.