The Game Itself
4 Stars
The Video: Sizing Up the Picture
4.5 Stars
The Audio: Rating the Sound
3 Stars
Replay Factor
3.5 Stars
Bottom Line
Recommended

'Hokkaido' is the final episode in this season of 'Hitman' releases, following the 'Intro Pack' (includes 'Paris'), 'Sapienza', 'Marrakesh', 'Summer Bonus Episode', 'Bangkok', and 'Colorado'. Like the others, it is developed by IO Interactive, the Danish crew that has worked on 'Hitman' since the franchise's inception in 2000.

'Hokkaido' takes us up to the wintry northern mountains of Japan. A future tech hospital called GAMA sits nestled here, accessible only by a cable car or private helipad. This is the hospital of the 1%, where stem cell treatments, transplants of stolen organs, and other ethically dubious procedures can be carried out by top surgeons no questions asked, as long as your bank account can handle it. It comes equipped with heavy security, a gourmet sushi restaurant, RFID-tagged patient kimonos, and a bespoke AI that watches everything and even helps out with surgery. It also currently contains two people on 47's hit list. One of them is the d-bag who tried to sink his training mission in the intro episode, and the other is said d-bag's contact in the Illuminati/Providence organization, a former Yakuza lawyer. 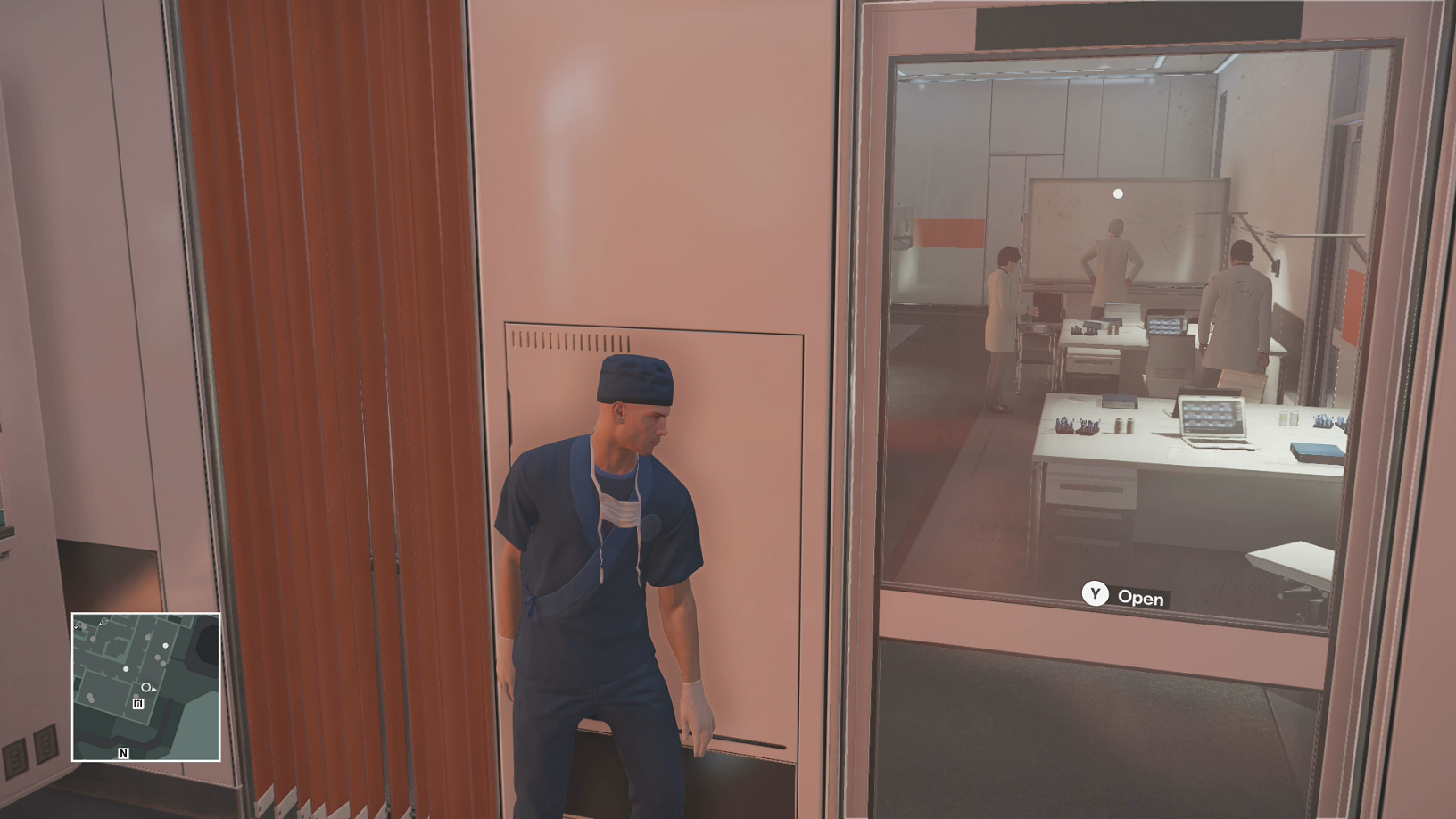 In terms of immersion and scope, IO has really nailed it with this episode. GAMA and its beautiful location could easily be adapted for a big screen spy caper or a Tom Clancy novel. The hospital has just the right amount of sci-fi and privilege to make me wonder if the world's richest people could really be going to a clinic like this, where they're 3D printing organs or chipping people with mood-altering drug delivery systems. 47 enters as an undercover patient and soon discovers that movement through the facility is extremely limited due to the RFID system, so frequent outfit changes are necessary to access the whole complex, even more so than previous episodes. 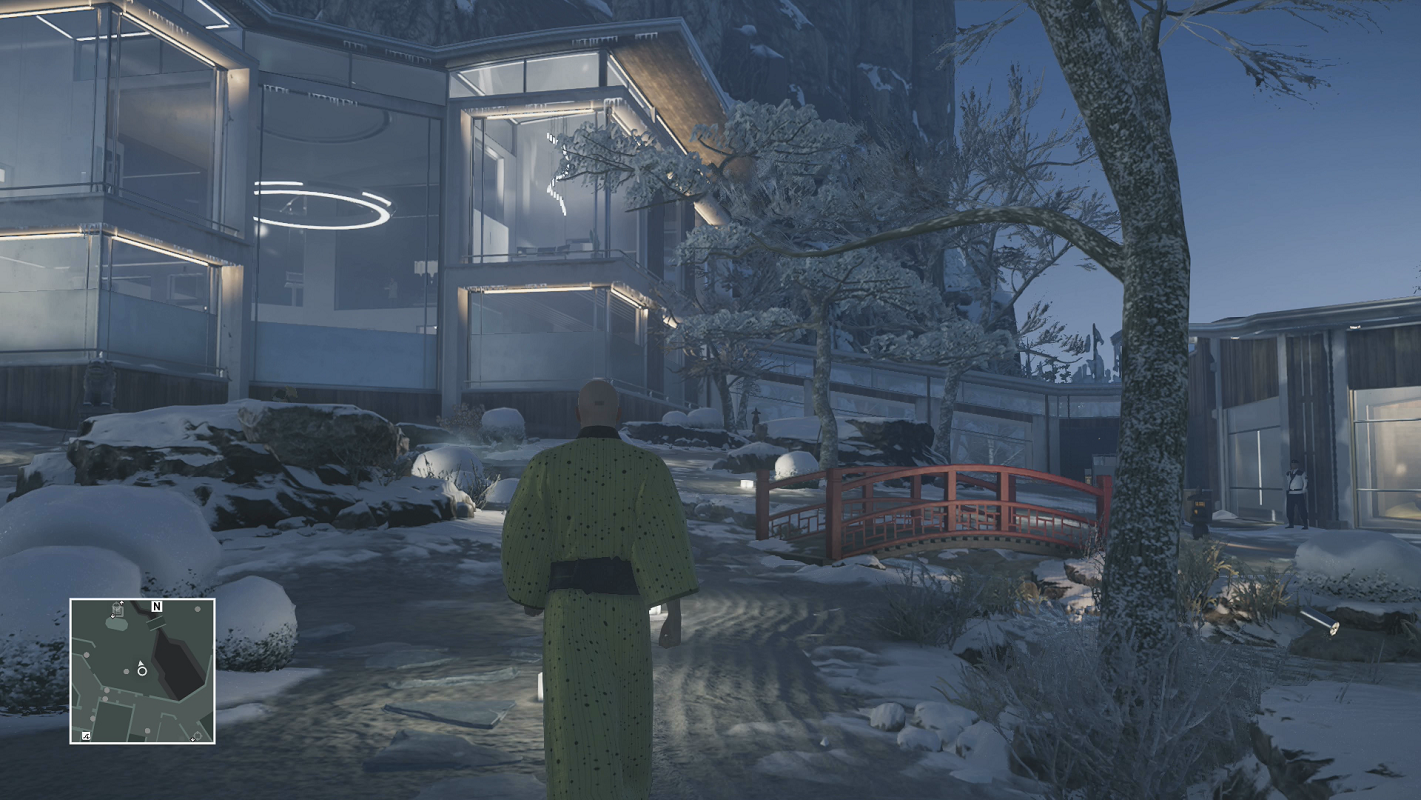 I have been hearing a lot of chatter about 'Hokkaido's high difficulty. The facility is hard to move through, it's true, but IO hasn't let that design decision detract from the creative, elaborate assassination opportunities available in the clinic. I thought 'Marrakesh' was more difficult, where outfits frequently failed to fool people who should be fooled. In 'Hokkaido', it's the locked doors that get in the way more than anything. When I did come across a good disguise, like a doctor or sushi chef, I explored as much as I could and made sure to note where I left the clothes in case I needed them again, because there aren't a lot of opportunities like that. Once I was in the downstairs lab, however, I was more or less free to roam as I pleased. There's only one area that's almost completely locked down, and that's the operating theater. Moving in and out of there is nearly impossible in any disguise, but there are still plenty of ways to kill the heart transplant recipient without being in that room. 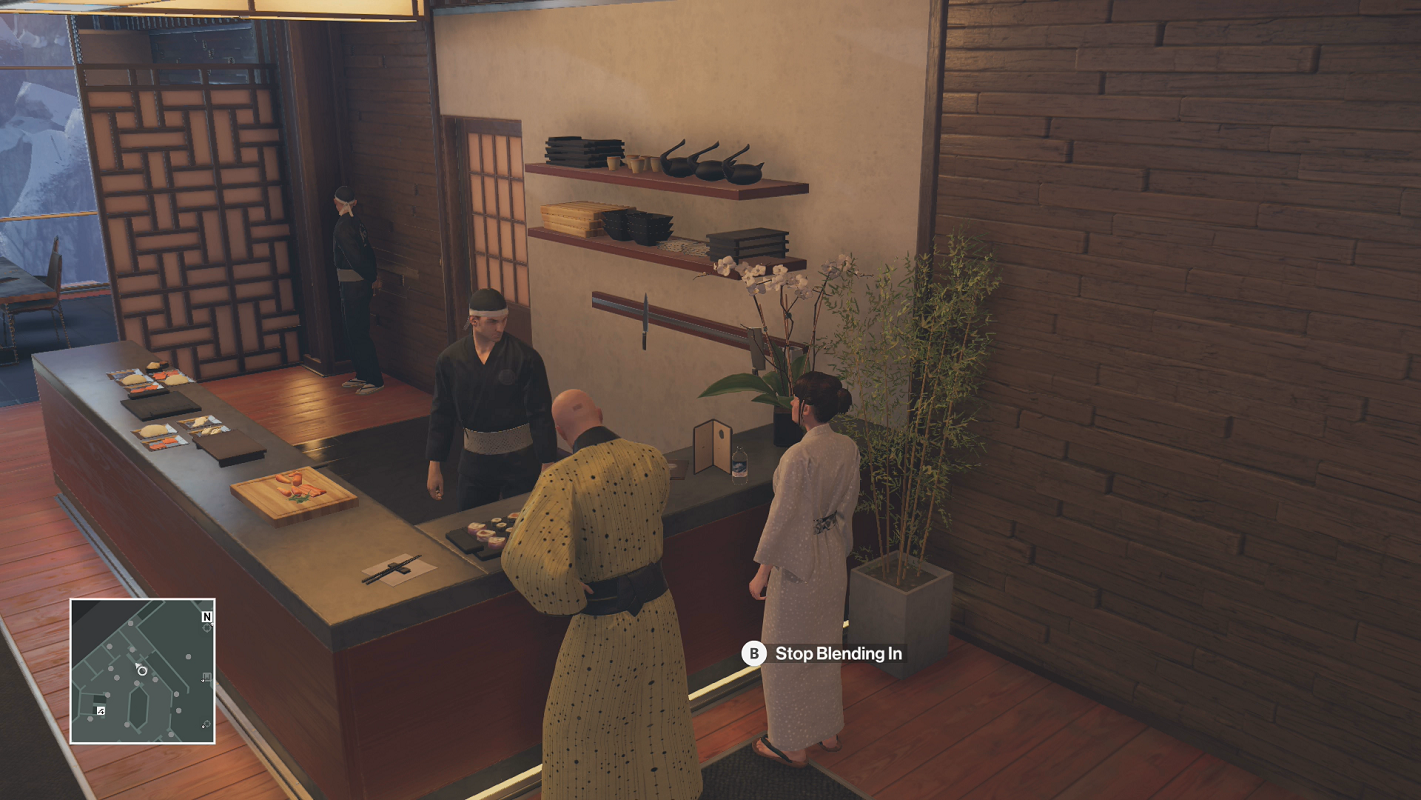 In contrast to the amazing art design is the relative lack of personality, or should I say personalities. A lower population density means less overall chatter, making GAMA one step up from a library in terms of human interest. There is the occasional conversation between patients, some germane to 47 and some not, but otherwise this is a quiet place of healing and decadent raw fish. The Yakuza lawyer is interesting in an entitled preppie way, but the other target is completely unconscious for the duration of the mission. Only a few other characters say anything more than a single line and it's always brief.

The meta-story encompassing all of the discrete episodes is also something of a letdown. It's so weak that I feel like I could narrate the entire end cutscene without ruining anything for you, because the dialogue has almost no exposition and struggles to tie together the plot threads that have been slowly stumbling about since 'Paris'. It would have been just as good if IO had tossed out all of the Providence malarkey and said "Here are some sandboxes and some wacky kill opportunities, have fun kids!" If they had managed to give us some interesting insight into 47 or Diana or the ICA I would be all for it, but sadly it never materializes. 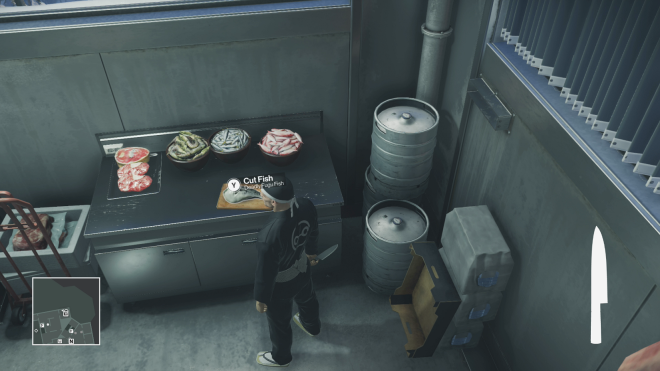 GAMA looks great, as does the surrounding countryside. It has the remote yet ostentatious feel of the 'Blood Money' Christmas mission - remember when 47 could shoot out the bottom of the glass jacuzzi and cause the target to fall to his death? This isn't quite as tongue-in-cheek but it's still a trust fund playground and looks the part. The performance is high and I experienced few frame drops or other problems. 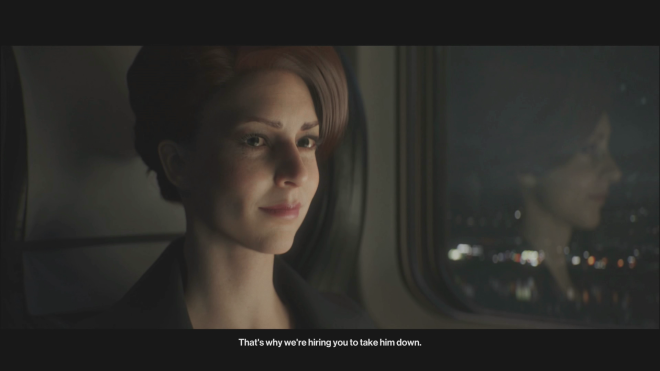 This episode is fairly quiet, although the ambient sound effects help paint the picture. The clatter of silverware in the restaurant, hum of electricity in the lower levels, dude in the shower listening to pop music, etc. As usual the voice acting is almost completely in American English, even when two Japanese people are speaking to each other privately.

'Hokkaido' has a replay value similar to the other episodes. There are lots of feats, objectives, opportunities, Easter eggs, and other hidden things for players to find, increasing their mastery and opening up even more avenues of death. There's even a ninja challenge, naturally. 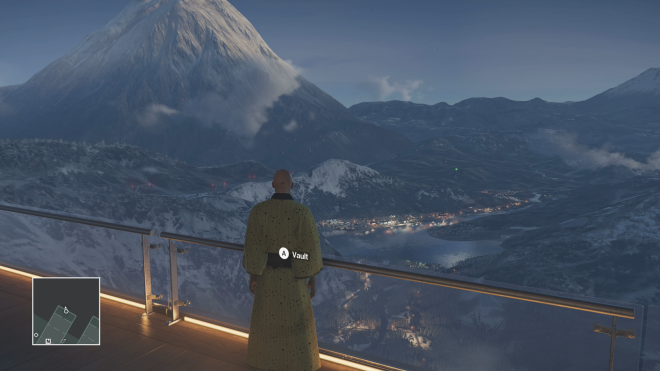 This final episode of 'Hitman' brings together all of the lessons IO has learned over the course of the season into a fun, elegant swan song. I will admit that I was skeptical of the episodic format before the intro was released, but they managed to come through and bring 47 into what is hopefully just the beginning of a glorious new career.