The Game Itself
4 Stars
The Video: Sizing Up the Picture
3 Stars
The Audio: Rating the Sound
2.5 Stars
Replay Factor
4.5 Stars
Bottom Line
Recommended

Digital Xbox One version reviewed. Review code was provided by the publisher.

The cleverly named 'Clustertruck' comes to us from Swedish-based Landfall Games as their first release. They describe it simply as "a chaotic game about not falling off trucks", which is very true. It is available now for PC, XB1, and PS4.

I started up 'Clustertruck' with absolutely no idea what I was getting into (in my defense, this is not usually how it works for us at HDD). The first level started with little warning and my first-person guy was unceremoniously dumped to the ground from atop a semi-truck. The level immediately restarted and again the same result. It turns out there are many semi-trucks all driving on top of each other (hence the name), and the whole game is basically an advanced version of "the floor is lava" that we all played as kids and our parents hated. The only objective is to jump from truck to truck to make it to the goal line. Touching the ground or any other surface is an instant restart. It is technically possible to ride on trucks for some time, but eventually the horrible drivers are going to crash, sometimes all at once. That's when the jumping comes in. 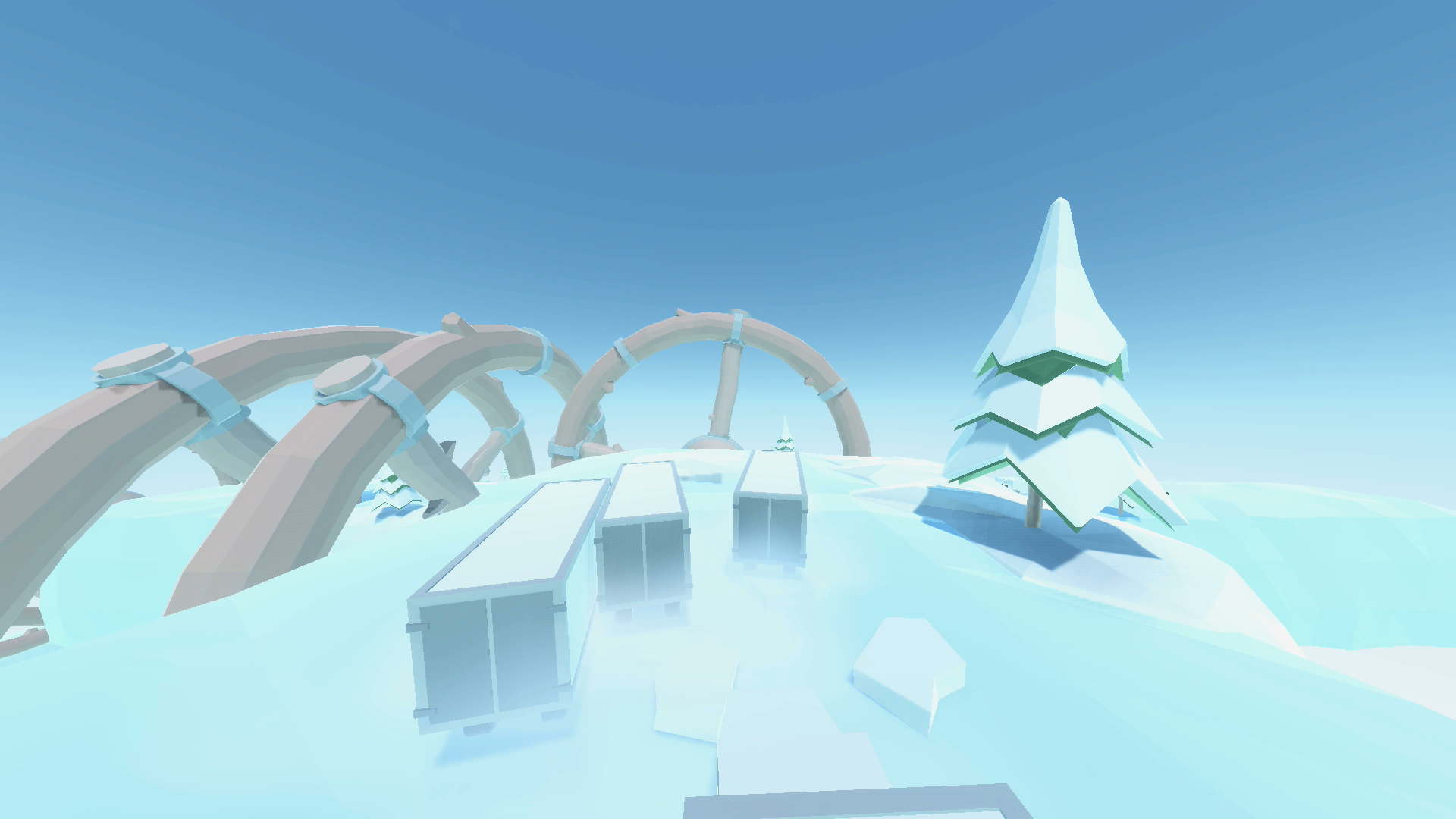 Jumping is more horizontal than vertical in 'Clustertruck', but huge leaps are possible after a few warm-up hops. It is rather difficult to control the player in mid-air, at least at first. Pulling off slick maneuvers awarded me with style points that can purchase special abilities. These include most things we've seen in many other platform games: slo-mo, double jumps, grappling hooks, and so on. Then there are things that are probably unique to 'Clustertruck', like being able to spawn a single truck below my guy so we have a chance at preserving the level by not hitting the ground. One jump ability and one utility ability can be slotted at a time, so players can swap out tricks based on a particular level's features or just to fit a preferred playstyle.

This is platforming on speed. Imagine the highway scene in 'Hardcore Henry' but less cheesy and more superhuman, mixed with video game tractor trailer hopscotch, and you'll have an idea of the kind of adrenaline in store during these massive jumps. Some of the levels are very small and narrow, with terrain features like boulders rolling down a hill towards the hapless trucks. Others are huge sprawling monstrosities with things to jump through and over and under in a kind of puzzley maze of jumping goodness. Every runthrough of every level is procedural to a certain extent. The trucks start out in the same position and arrangement every time, but how they drive can change depending on the grade of road and what they hit along the way, including each other. They will happily drive off hills or cliffs, putting the physics engine to good work as I try to bounce my way across a temporary bridge of falling trucks.

'Clustertruck' varies wildly in difficulty from level to level. Some can be quickly completed on the first try in less than a minute, while others are more demanding and require many, many restarts to accomplish. It doesn't go strictly by level number, either - some of the earliest levels in a world are the most difficult and vice versa. Occasionally this gets frustrating, but once the abilities start to unlock, most levels are manageable and I can busy myself more with unorthodox jumps than with achieving a flawless line. 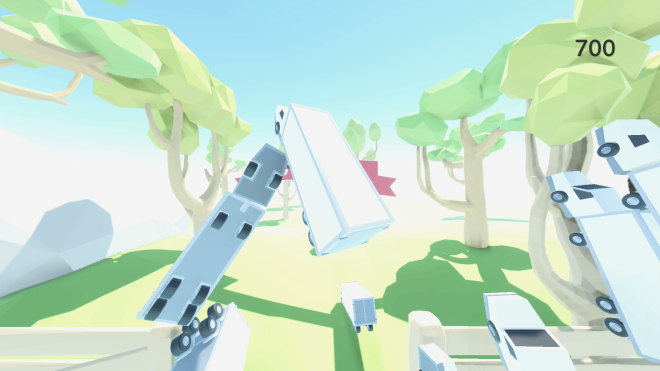 The game has a minimalist presentation, with simple art style and low-impact textures. The explosions are cartoonish and there are few other effects, just trucks driving in the same direction and crashing into things. It works well with Landfall's "gameplay first" design philosophy, and I never found myself concerned with the visual quality. The engine is able to keep up with all of the action, try as I might to blame my performance on stutters (the 'Rock Band' effect). 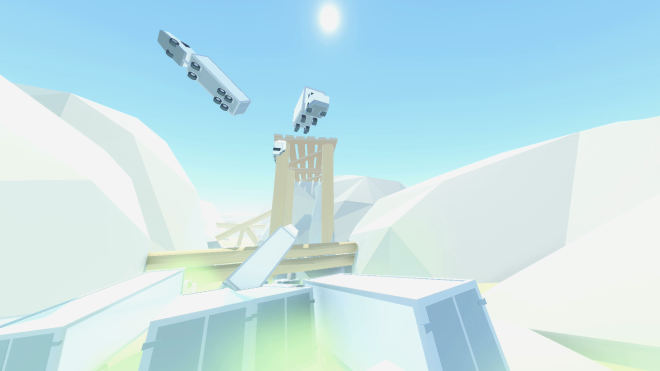 There is a light, looping soundtrack that takes a backseat to the truck honking, and that's about it for the soundscape. That makes for a great game to play muted while playing other music in the background.

The abilities add variety to the formula, but this is a jumping game. If you do not enjoy Hulk-style jumps across vast distances, doing sweet tricks and basking in the glory of falling semi-trucks, and also dying a lot, this isn't going to suit you. In my experience the gameplay more than makes up for the two or three levels in each world that almost repeat themselves into oblivion because they require such a precise, by-the-numbers execution. It's much more fun when there's more of a sandbox approach where I can try out different abilities and not be pigeonholed. 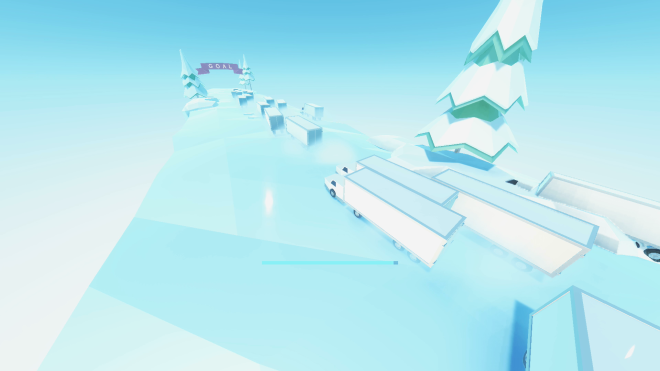 'Clustertruck' does for jumping what 'SUPERHOT' does for shooting. It boils down the genre into a distilled form, with very few bells and whistles. It doesn't really need the bells and whistles, and manages to more or less avoid the tedium for a long time solely by virtue of its immaculate platforming.