The Game Itself
4.5 Stars
The Video: Sizing Up the Picture
2 Stars
The Audio: Rating the Sound
3.5 Stars
Replay Factor
2.5 Stars
Bottom Line
Recommended

Game of Thrones: A Telltale Games Series - Sons of Winter

'Sons of Winter' is the fourth episode in Telltale’s episodic 'Game of Thrones' title, following 'Iron From Ice', 'The Lost Lords', and 'The Sword in the Darkness'.

In this episode we see an escalation of the simmering conflict between the Forrester and Whitehill clans. It’s not all-out war yet, but I get the distinct feeling that that’s where we’re headed. In previous episodes, the Whitehills have abducted the youngest Forrester child as a hostage, and installed their own fourthborn son Gryff as their "representative" in Ironrath. Gryff, a thoroughly unlikeable young man, has taken this opportunity to browbeat the Forresters and local populace into submission. He has done this by abusing Forrester children Rodrik and Talia, and forcing the family to let his garrison quarter in their great house. 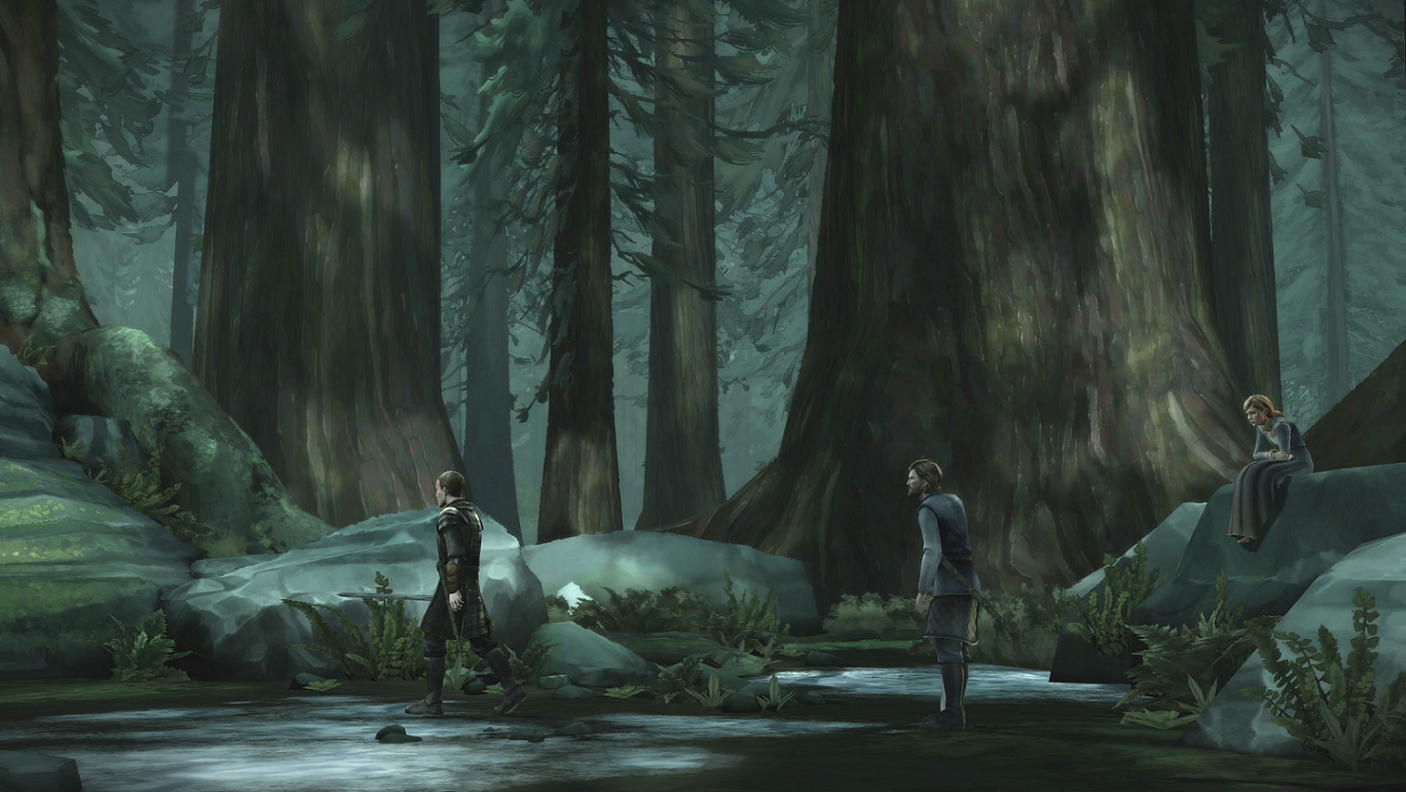 'Sons of Winter' finally lets me strike back against the dastardly Whitehills, instead of just kind of taking a beating the last few episodes. This of course is all up to the player - you are quite welcome to turn the other cheek, as it were, and treat with Whitehills with deference. The only incentive for this kind of behavior, in my opinion, is the hope that if they are placated, the Whitehills will treat their hostage Ryon Forrester more kindly and ultimately release him back to his family. Historically, the strategy of appeasement tends to not work out well for the appeaser, so as usual I have taken a hard line against the Whitehills. This led to one of the best (and most violent) scenes yet in the series, where my convalescent Rodrik beat Gryff to a pulp with nothing but his walking cane. This is only one storyline of many, however. Mira is still playing the Game in King’s Landing, where she is working hard to secure the financial stability of the family, even with her business partner Tyrion Lannister’s dismal fate (this takes place during season four of the TV series). Realistically, she has the most dangerous job of all the Forresters. Terrible things happen to people all the time in King’s Landing, as the characters frequently threaten each other with, anyways. Secondborn son Asher has met Daenerys Targaryen and agreed to assist with her invasion of Mereen, in return for releasing some of her mercs from their contract so that they can accompany Asher back to Westeros.

While all of this is happening, poor squire-turned-Night’s Watch steward Gared Tuttle is diligently exploring north of the Wall for the Forrester family macguffin, the North Grove. Some bad things happen with him that I won’t get into, but his storyline is rapidly becoming the most interesting in the lot, and that’s high praise considering how interesting they all are. 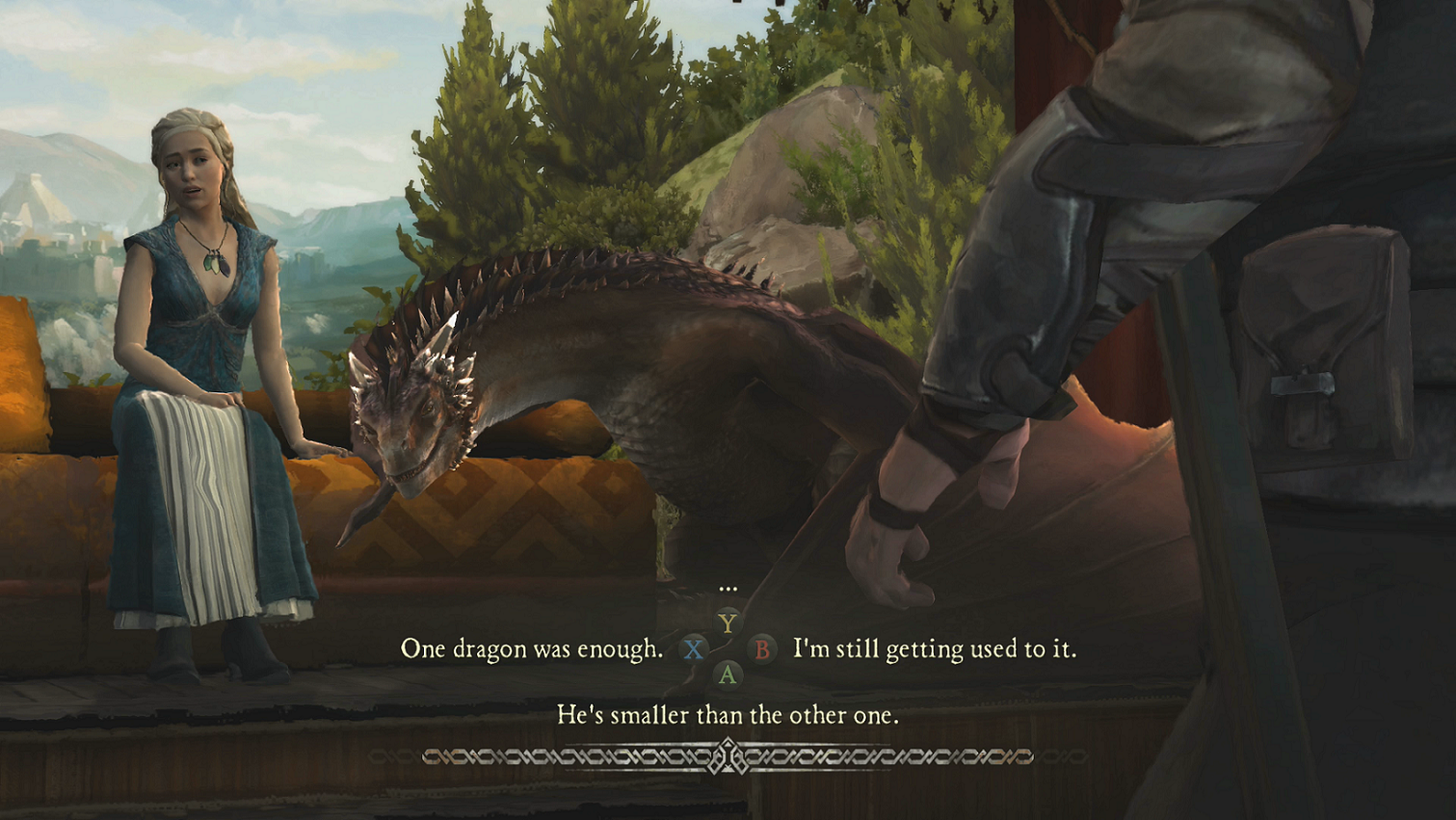 If there’s one thing I’d like to see more of, it’s a bit of romance. I don’t exactly need the sultry scandal of the HBO series, but everything is always so dour. There are a few subplots that could go somewhere, like Rodrik and Elaena or Asher and Beskha (not to mention the eventual reunion of Asher and Gwyn Whitehill, the tryst that resulted in Asher’s exile to Essos and estrangement from his family). 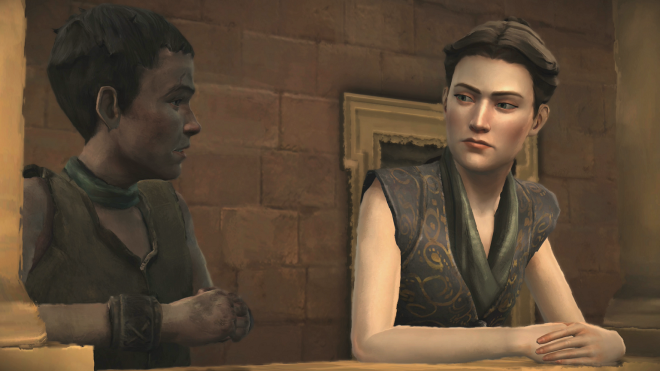 I noticed some timing issues in this episode with quick time events. The characteristic stuttering of the Telltale family of games has become bad enough that it’s interfering with the gameplay, and naturally this is detrimental. Also, although it might not be practical, I recommend not pausing the game if at all possible. Returning after a pause leads to problems, including at least one crash in my experience. 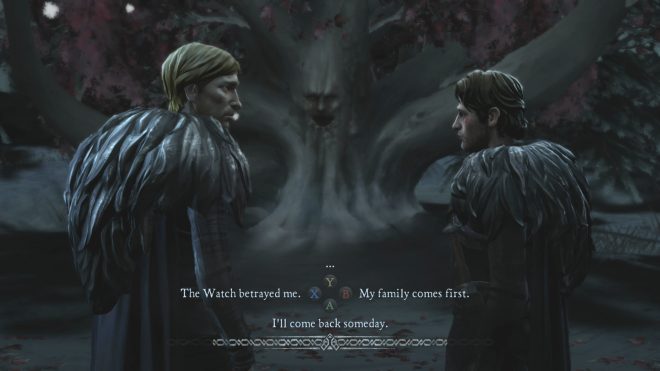 The Khaleesi’s voice actress (Emilia Clarke, I presume) has an excellent turn as the uncooperative and recalcitrant queen when Asher comes knocking at her door. The other audio is good as usual, from the soundtrack to the voices to the effects. Performance wise we have some issues with lip syncing and audio drops after returning from pause.

The usual recommendations here. The episode is only a few hours long, and there will likely be a two-month break before the next one, so there is time for a mulligan if you don’t like how your save turned out. 'Sons of Winter' is another strong showing from Telltale and their take on the morbid, morally ambiguous 'Game of Thrones'. The writing, pacing, and production value are all top notch, it’s just the engine holding them back now. This, in terms of the story, is probably the best so far in the season.