The Game Itself
3.5 Stars
The Video: Sizing Up the Picture
2.5 Stars
The Audio: Rating the Sound
4.5 Stars
Replay Factor
2.5 Stars
Bottom Line
Worth a Look

'ReCore' is a Microsoft exclusive developed by Armature Studio, which does a lot of porting work, and Comcept, led by Keiji Inafune. Inafune worked at Capcom for 23 years and was involved in franchises like 'Mega Man', 'Resident Evil', and 'Dead Rising', among many others.

'ReCore' is set in a lonesome future where humanity has managed to kill off the Earth. The remnants of our species head out to another planet and go into cryosleep in orbit while robots terraform the surface below, a process expected to take two centuries. Player character Joule wakes up to find that not only has the terraforming not happened, but the other humans have disappeared and been replaced with violent robots.

Joule is accompanied by her corebots, loyal robots who can be upgraded with the junk scattered around Far Eden. The first corebot is an adorable dog named Mack who can sniff for buried treasure and charge enemies for extra damage. Each of his parts can be swapped out for other blueprints to adjust his stats as desired, and he can be augmented with cores that Joule forcibly yanks out of enemies. Cores are the currency of 'ReCore', the keys that unlock new areas, and the impetus that drives the story forward from dungeon to dungeon. They power all of the doors and gadgets across Far Eden, and of course the bosses and routine enemies.

'ReCore' is equal parts combat and platforming. The dungeons that Joule scavenges for cores are full of huge, drawn-out jumping sections. Joule has only a little clamber animation at the edge of surfaces; the rest of it has to be done twitch-style. The metroidvania influence is on full display here, and the platforming is by and large quite fun. A lot of the jumps are so far apart that it doesn't seem like Joule will make them, and it's always a little victory when she does. There are purple portals suspended in the air for the bigger divides that reset her jumps and boosts, permitting her to travel great distances at once. Later on she can use a little claw droid to swing around on metal tracks. It's an invigorating feature set most of the time, and made better by the piles of resources scattered tantalizingly around the ledges and jumps, beckoning me to collect them while avoiding a backtracking fall. 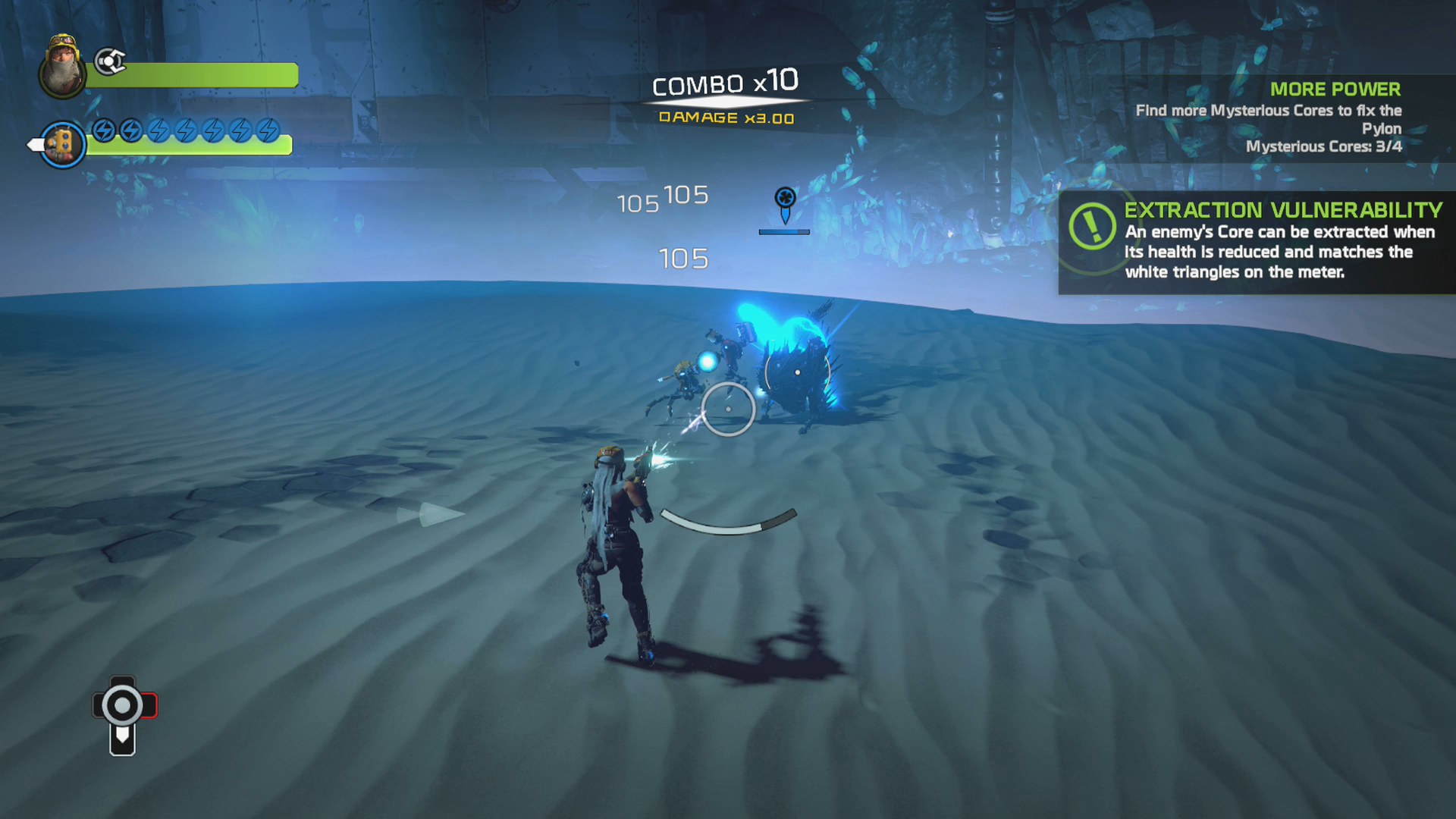 The combat is also a good time, at least in the beginning to mid-game. Joule has her rifle and her winch and that's about it, but her robotic companion can dish out some damage later on. Each enemy has a color that corresponds with a particular ammunition, and Joule can swap out colors on the fly for extra damage and debilitating status effects. It's a simple but enjoyable system, even if the draw begins to fade after a few hours. I took some comfort in the myriad upgrades for the helper bots and relied on them more in combat (especially when the gorilla frame is introduced), helping them when necessary and pulling out the valuable core when enemies had been sufficiently weakened. Core pulling is a minigame that is explained poorly and can be vexing, even after playing for some time. It's a game of tug-of-war with a color-coded cable that never seems to operate like its colors would indicate, so often I would just spam it until I was lucky enough to get the core by accident.

The less rosy parts of the game include boss fights and the grind. The bosses are predictable, boring and often easier to defeat than the enemies immediately preceding them, and the final boss is an extreme example of this. Color switching does come into play, but boss fights rarely takes advantage of Joule's jumping ability, or require anything more complicated than a few minutes of locked-on rifle shooting and maybe a hop here or there to avoid fire waves. 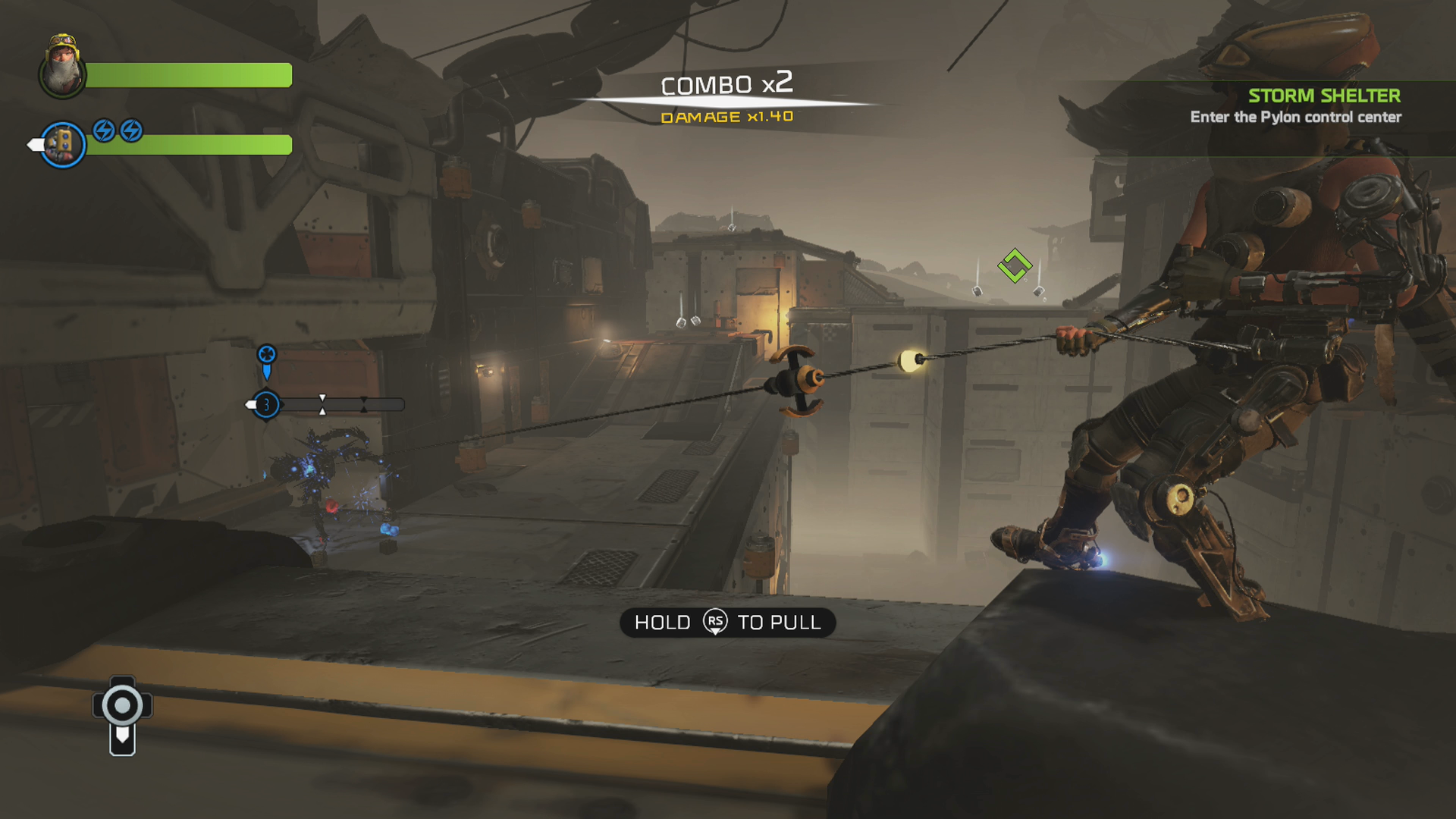 As for the grind, the game begins to overstay its welcome after a time and fails to introduce new mechanics or abilities. Sure I can level up the bots, but the jumping and especially the combat lose their luster long before I am satisfied with the state of my characters. The world is pretty large and pretty open, with a fast travel system, storage facility and other expected accoutrements, but most of it is a one-trick pony. The enemies don't really change, the treasure doesn't change, and Joule herself remains the same for most of the playthrough, except for her levels.

'ReCore' is a mixed bag but the character interaction is often heartwarming. For most of the game it's just Joule and her corebot, and they are like family. The corebot AI is excellent at this, because it never stops attempting to help Joule, even when it is heavily damaged or in an inconvenient position. I had to manually call him back to me to avoid death, and even if it's inconvenient at times, it's a perfectly appropriate behavior that solidifies Mack's role as my fiercely protective little buddy. 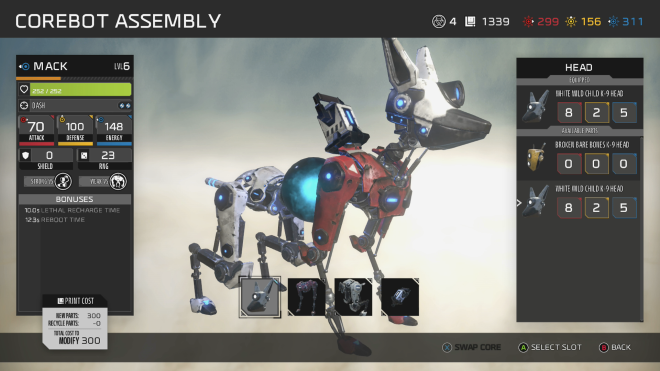 'ReCore' has decent texture and environmental work, especially with enemy models, but the seams show a lot of wear. There are little clipping problems everywhere, some framerate issues, screen tearing, and the like that aren't egregious individually, but add up to a tired and worn-looking presentation. The load times are long as well, sometimes over two minutes - long enough to make me think the Xbox has passed out from exhaustion or boredom. 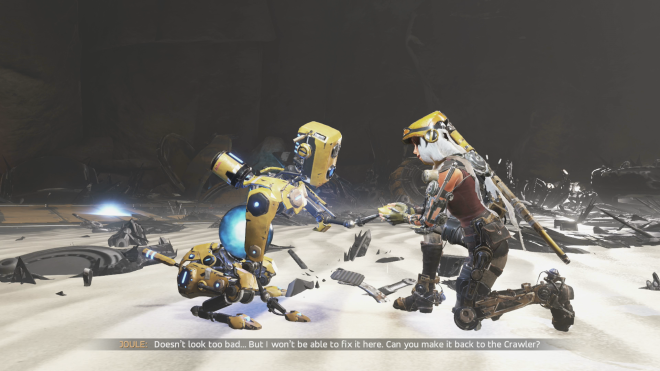 The soundtrack, written by 'Star Trek' composer Chad Seiter and performed by the Philharmonia Orchestra (the same ensemble that usually performs for the Marvel Cinematic Universe), is diverse and sweeping. The tracks blend in seamlessly with Joule's adventure, adopting a fast-paced, cinematic quality during action bits and dropping into somber moments when she is sad. Joule is the first video game role for her actress, Erika Soto, and she does a great job at it. That is very important considering that for most of the game, hers is the only voice you'll hear.

This is an open world game with a linear story, so the bulk of the content is going to be in one large playthrough. Everyone's mileage is going to vary and it will come down to how much you enjoy the laborious process of core gathering, but for me the initial excitement began to dry out after only a few hours. There is no multiplayer or other mode of play, but dungeons are divvied up into categories depending on their gimmick: platforming, mazes, combat, etc. 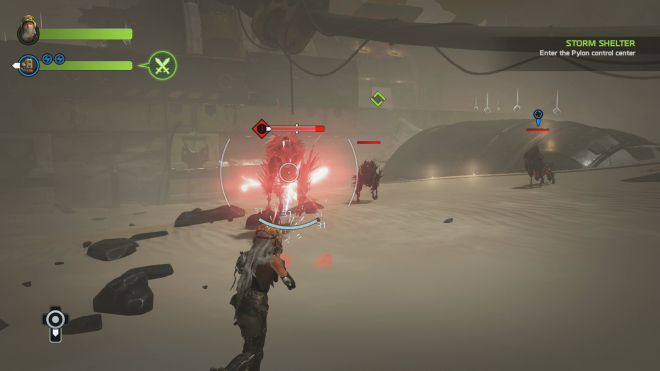 'ReCore' can be very fun at times, and it can also be very tedious. It has good video game conventions, like the awesome jumping-dashing-grappling bits, but also has some bad ones, like bosses that are made difficult only by virtue of having massive health bars. It isn't helped by the weak technical presentation. It's probably best for only the most ardent of platforming fans, the players who can put up with all of its hangups.