'Order Up' is the fifth episode in the first season of 'Minecraft: Story Mode', following 'The Order of the Stone', 'Assembly Required', 'The Last Place You Look', and 'A Block and a Hard Place'. Typically the fifth episode of a Telltale season is the final one ('Game of Thrones' was an exception), but the company has announced that season 1 is getting three more before it’s complete. Still no word on a second season.

After the last episode ended, I wasn’t quite sure where we’d be going next. I mean, the witherstorm is dead, which really seemed like a final episode kind of thing, but here we are basking in the glow of the New Order of the Stone. It’s made up of our plucky heroes - Jesse, Axel, Olivia, and Petra, with special guest Lukas and consultation by the old Order. In 'Order Up', Jesse and company are given a tip by apparently reformed mad scientist Ivor, and they head to a remote temple in search of treasure and glory. 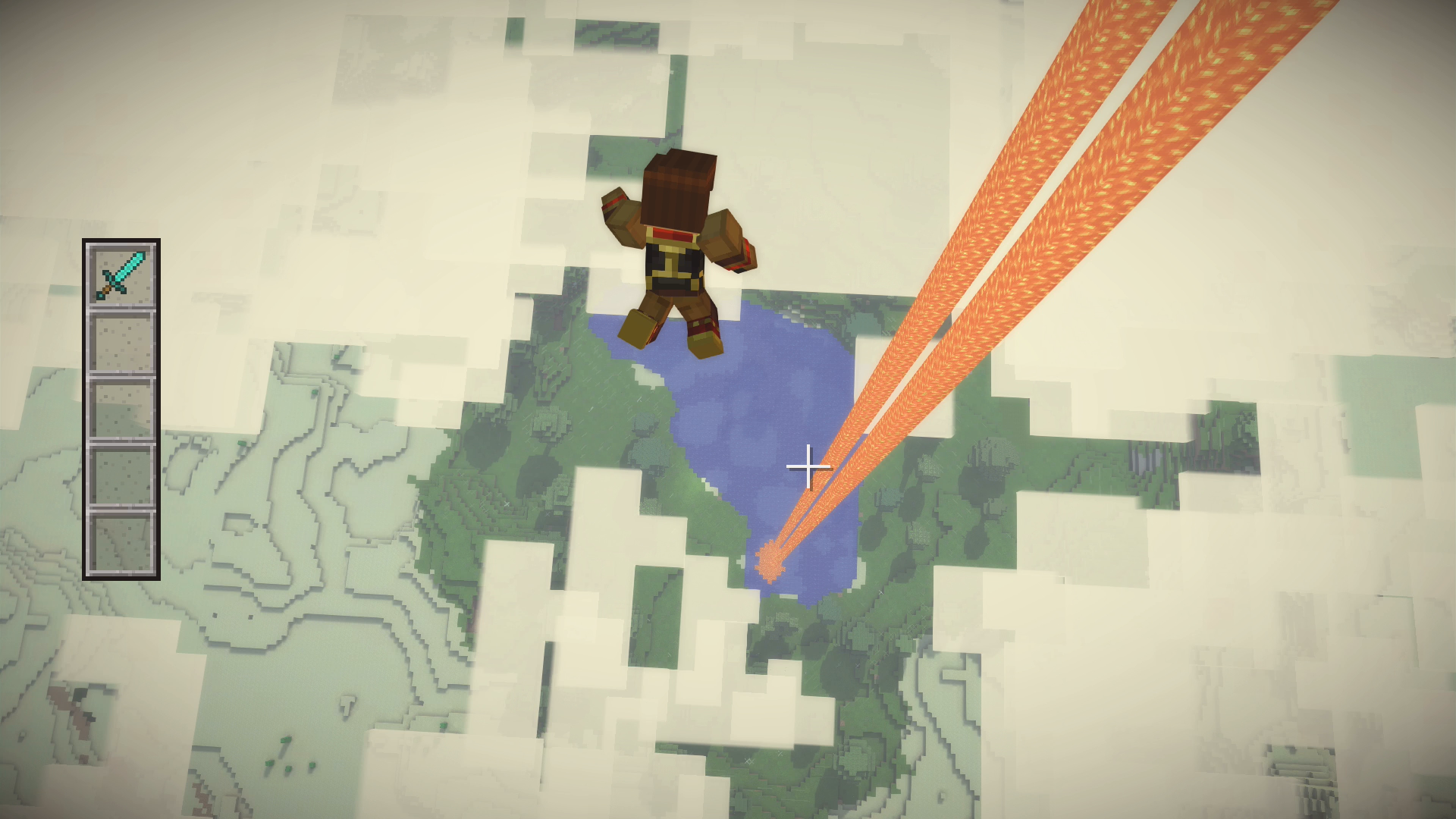 There has been considerable time lapse since the last episode, as the Order has been busy raiding tombs and stashing sweet loot. They have made a name for themselves as the saviors of this 'Minecraft' world, complete with a fan club. This celebrity status has really changed the dynamic of 'Story Mode'. Our heroes are actual heroes now, and they have power, and this brings new opportunities and problems when they interact with others. Not everyone is happy with their accomplishments, as it turns out. 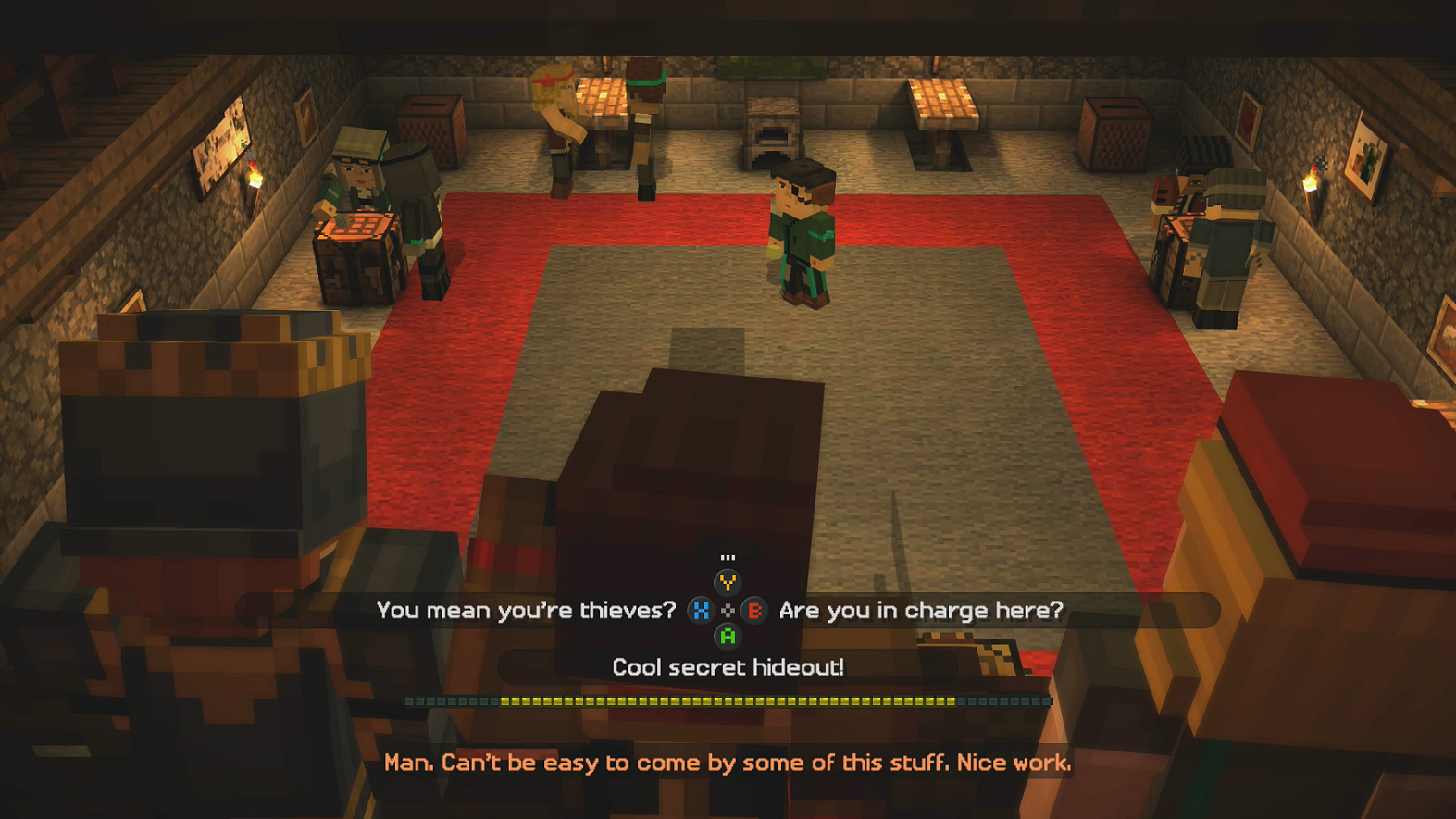 In the temple, the team finds a portal to a whole new world: Sky City. As the name suggests, it is a floating island, and my how grand it is. It is also kind of horribly oppressed. Because the island is small, resources are in extremely short supply. This isn’t the land of plenty that Minecrafters are used to, where things like dirt and cobblestone are a dime a dozen. An opportunistic individual calling herself The Founder rose up with an enigmatic supply of goods and declared herself the benevolent overlord, and now does fascist things like requiring citizens to petition for crafting things as simple as bread. Naturally, this does not sit well with the altruists in the Order.

A wrinkle is thrown in the mix when Aidan, a member of the Ocelot gang you might have forgotten about from the very first episode (they call themselves the "Blaze Rods" now, of course), appears and starts throwing his weight around. He is a simple bully, and Jesse’s interactions with him constitute much of the conflict in 'Order Up'. The story seems almost like a sitcom because it’s self-contained, and most of the problems seem to be wrapped up by the story’s end. Actually, that might not be a terrible format for a series like this, because the Order has good enough characters that I would be happy to pilot them through just about anything, and not worry about multi-episode arcs sagging down the narrative.

Many of the series’ characters have reduced roles in this episode, and Olivia and Axel hardly appear at all. Instead, Telltale is focused on introducing new characters and establishing brand new storylines. Ivor is one of the better parts of the narrative. He used to be just kind of a tool, but now he provides comic relief simply because he’s such a weirdo. This is the kind of character that Telltale needs to be working on. Not weird necessarily, just unique. Milo is another great new addition. He is the leader of an underground crafting club in Sky City, and is at once nervous, shady, and heroic. Not all of the cast are winners. The Founder especially is pretty bland, although she has her moments. 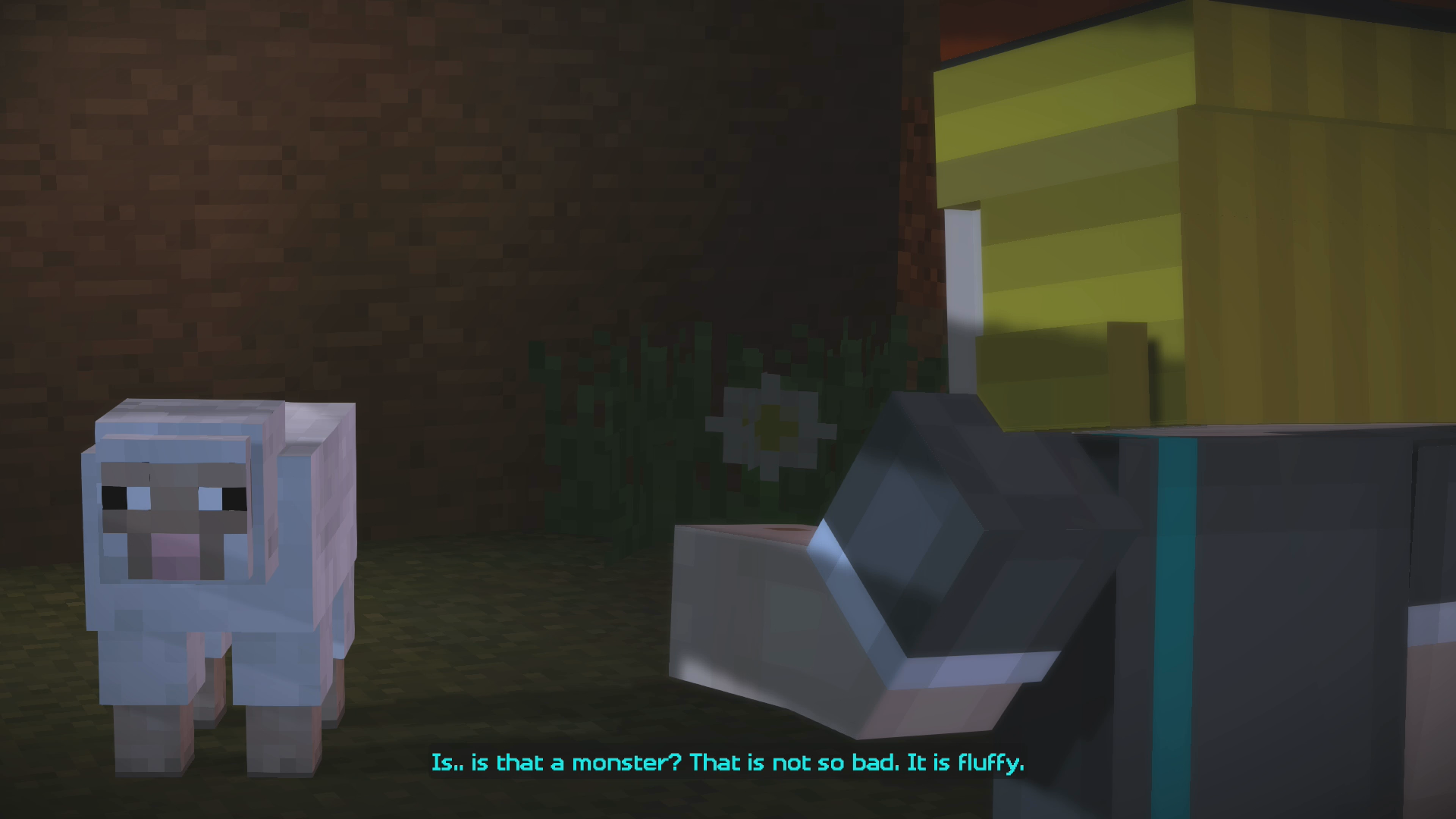 The decisions being put to the player throughout the episode are compelling because they’re often difficult. I didn’t really want to lay down the law and tell Ivor that he can’t just build a house full of lava in the middle of town because of the incredible damage it poses to the community. But, these people are depending on us. Also, I don’t want to hear any nagging later on when someone falls into a pit of lava in the town square and I get blamed for it. 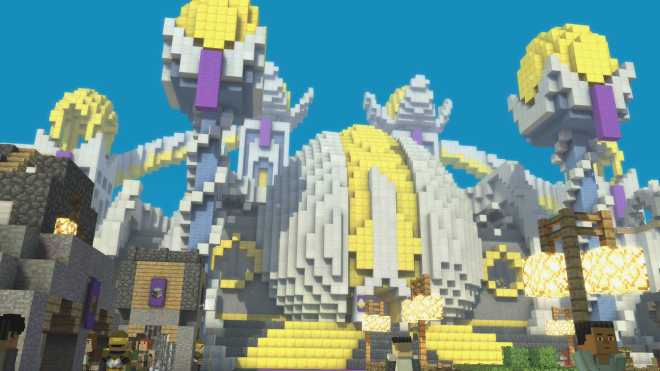 Sky City is quite impressive, and character models for the new people are unique. Otherwise this is the same 'Minecraft' we’ve come to know and love. Stuttering is less of a problem than in most Telltale games, even with longer, more involved fight scenes. 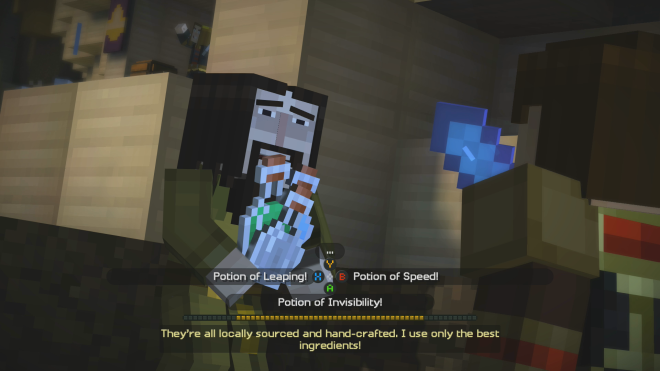 The acting is great, as usual. The dialogue is a little hokey, especially near the beginning of the episode when everyone is high-fiving each other, but this is a family game after all. The sounds are less memorable but the score is the same pretty 'Minecraft' stuff.

Some of the decisions I had to make could have gone either way, and some of them seemed small enough that they might not factor in heavily towards future episodes. This is probably the longest 'Story Mode' episode so far. 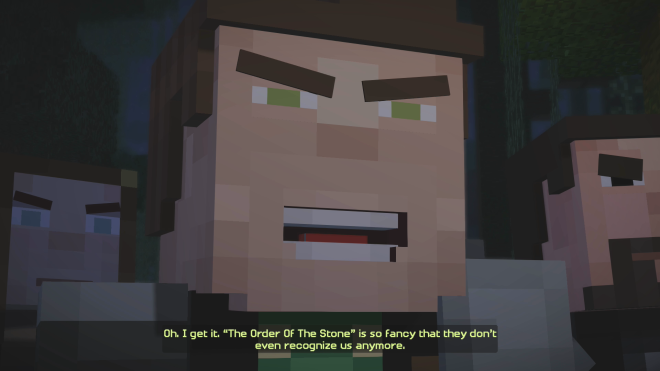 'Minecraft: Story Mode - Order Up' is a return to form for the series, which has been struggling a bit in narrative heft the last few episodes. The witherstorm probably went on longer than it should, but it was a serviceable origin story for the new Order of the Stone. 'Order Up' seems more like a new season than a fifth episode, and I think that will end up being an advantage as we move forward.